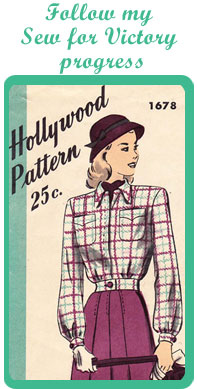 Well everyone, I am now fully ensconced in my Sew for Victory jacket project!

For my project posts going forward, I’ll add a little sidebar that links back to every post I tag with “sew for victory”. I hope it may help someone in the future watching me take on the challenge of outerwear for the first time. Plus, I know at least two of you have this same pattern but haven’t sewn it yet either! 😉

I’m going to try and not write too too many posts on my progress since I know there are probably a lot of you who aren’t interested in this topic. So each post may be lengthy so I can condense topics for those who really want the sewy nitty gritty!

(Maybe you’d be more interested to know that I’m cooking up a design for myself to re-create Fiona’s stranded cardigan from the movie “Secret of Roan Inish”? Oh wait, I’m just that kind of nerd? Moving right along…)

Anyway, if you follow me on Instagram, you may have seen a couple of photos of my muslin in-progress. Muslins sure aren’t very exciting looking, are they? I hate doing them and avoid them when I can. But for this project, it was a necessary step.

I used a somewhat heavy, stiff cotton muslin. Since it’s just a mock-up of the final pattern, I omitted the facings and upper collar (just pressing the seam allowances in), as well as the facing for the band at the hem. (Good call on those of you who pointed out that the band was probably faced while the cuffs were folded in, causing that piece to seem smaller than I expected… you were exactly right!)

Here it’s shown on my dress form, with socks mimicking the shoulder pads (thanks for that tip, Liz!). If you’re sewing a jacket, do not forget to use shoulder pads (or a stand-in for them) in the fitting stage, otherwise the fit will be off. Plus, you may end up making your sleeves too short, since the shoulder pads will take up some of that length! 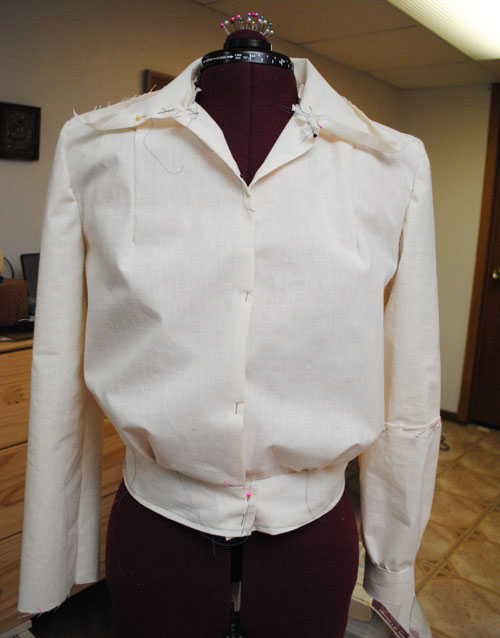 I’m quite pleased with the overall fit in general, although looking at a muslin is pretty lackluster, isn’t it? You really do have to have some imagination to see through it to the final project. Quick thing to point out: I only bothered to do the cuff on the left sleeve, so the right one is just hanging free. I also haven’t added the patch pockets on the chest.

The body doesn’t have much going on and it’s not a fitted style, so there’s not too many things that could go wrong in theory. The sleeves are 1″ too long (you can see I pinched that out of the left sleeve). The bodice is at least 1-2″ too long on me, which I expected as I have a short torso and this is always a problem for me, but I haven’t pinched that out on the muslin yet. So the final jacket will look slightly less blousy and shorter. It will hit me just below my waist like the pattern photo… meaning no inseam pockets like I thought I might add, as they’d be too high and look funny.

The one pattern change I made before the muslin was to narrow the sleeve at the wrist. It’s shown as a very billowy gathered cuff, but I wanted it a little more trim (more like real Ike jackets). Not including seam allowances the sleeve is about 14″ around at the underarm and was the same at the wrist. 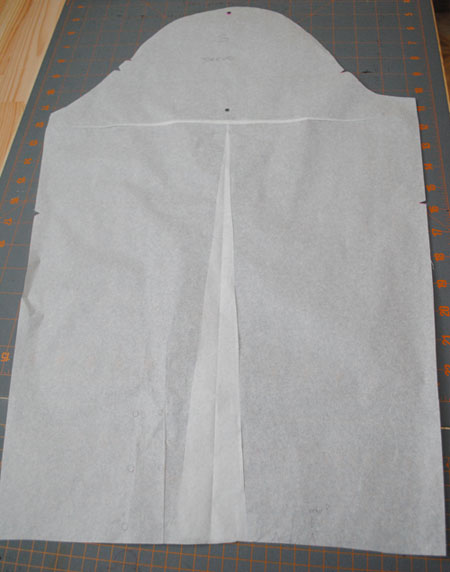 I slashed my traced piece up the center and simply folded out the excess and smoothed the bottom. It was a lot of width so towards the underarm I ended up sort of flattening out a slight bit of excess into a small tuck in the pattern… this is probably verboten but I did it anyway. And you’ll see my sleeve hangs nice and straight, no drag lines or anything (even on my body): 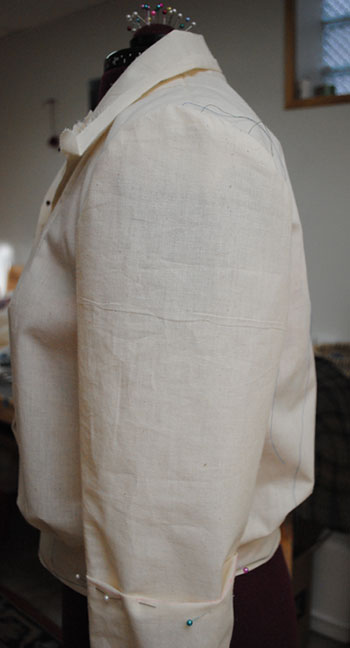 The only other change I had to make with the narrower sleeve was to move the circles that indicate where the sleeve vent goes or it would have hit my wrist in the wrong place. I simply moved it over the distance I omitted from the width. I wasn’t sure if that would actually end up in the right place (I couldn’t find any resources online that pointed to a standard for this) so I didn’t slash it until after I’d set the sleeve in, but it was just right. There was a notch in there too but I forgot to even move or clip it, oops. 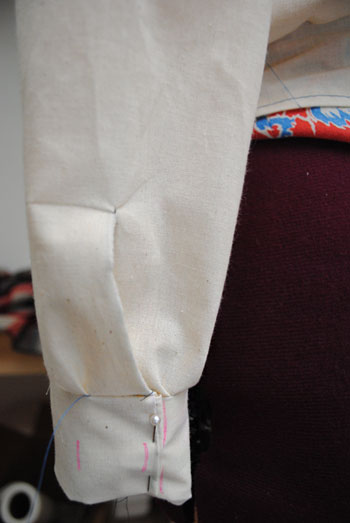 (Btw all my gathers look like complete crap and more like pleats… sorry, I don’t try for precision with that on muslins!)

Even though I didn’t add the pockets, you can see the placement below. The front darts end right smack in the middle of the pocket. The pockets obviously won’t look quite so big without the seam allowances showing! 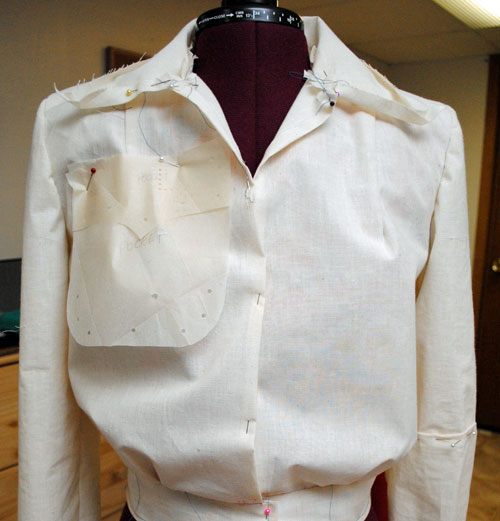 I did have a couple of minor trouble areas. The collar, for one. I don’t know what the heck the problem was, but after stay stitching my neckline, clipping it so I could attach the under collar smoothly, I had an excess 1/4″ collar between the shoulders, even though the other markings towards the front matched fine. Huh? So instead of fretting too much about it I re-cut the piece without that extra 1/4″ and it was fine.

The bands at the hem were also a little funky. The front band (P below) was curved at the edge where it attached to the back band (R below) but the back piece wasn’t. You can see the notches don’t match either and the back piece is taller, but if you eased the back into the front, it would match. 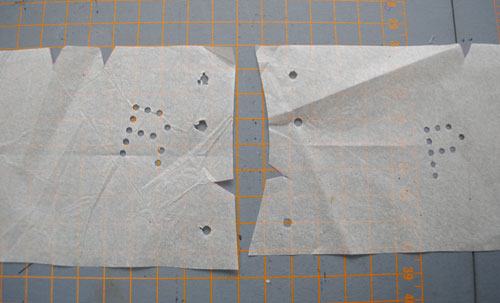 Below is what the instructions say… nothing about easing. But you can see the seam isn’t curved, they show it sewed straight. I think it’s trying to show the ease on the inside of the pieces with those slightly squiggly lines. What do you think? How would you deal with this? I have half a mind to just straighten this all out with no ease, I must admit. 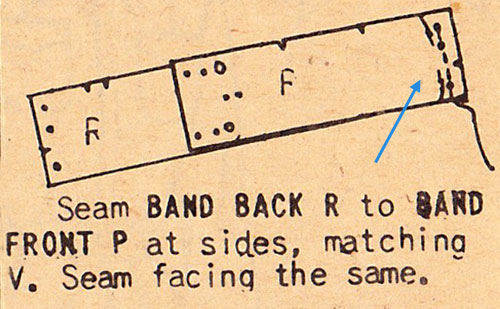 So what things are still up in the air?

I’m not sure how I’m going to want the collar to fall. As the pattern shows there’s really no open lapel, even though you could make it that way if you look at my below photo. It’s hard to decide with the muslin I think, so I’m planning to make that decision once the jacket is constructed. I’m not doing bound buttonholes it’ll be okay to wait until then, since I won’t have to do the buttonholes early on. What do you think? Button all the way to the top or leave it with the notched collar open? 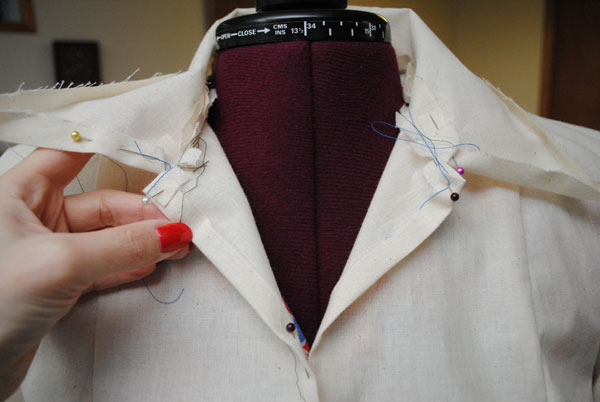 And the last thing: the cuff is fitted like a dress shirt. I can’t get it on and off without unbuttoning it. The buttons will be big, so it’s not like it would be difficult to do that. I guess it’s just an odd concept for me since I don’t own any outerwear with tight cuffs, even though it’s clear from the pattern pictures that it’s meant to be pretty fitted.

I kind of want to keep the fit of the cuff true to the original pattern but I wonder how annoying it would be. Below it’s compared to the loose-fitting (slip on) cuff on one of my vintage Pendleton 49er jackets. (Which gives me an idea… if I end up having a hard time gathering my wool fabric, I may just make pleats instead.) I think I’m leaning towards keeping it as-is. How about you? 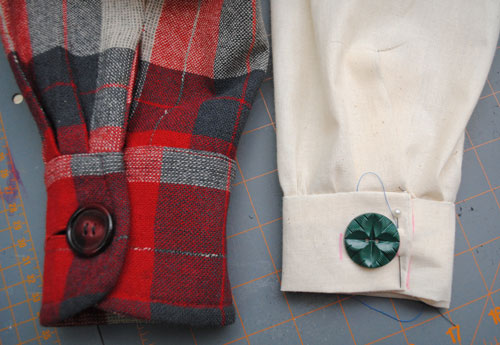 Phew, that’s a lot of muslin talk. I’m ready to start the jacket soon! Obviously I have a few decisions to make before I cut my fabric, and I need to trace off my final pattern pieces. Next post I’ll be talking about the decisions I’ve made about underlining, interfacing and supplies.

Hope you are having fun with your Sew for Victory project! 🙂