I know I don’t frequently talk a whole lot of shop during the construction of the garments I sew or knit, but I was thinking of doing it a bit with my Sew for Victory project. It’s the biggest project I’ve ever undertaken, and I know a lot of you seemed excited by the idea of this project, so I thought I’d do more than simply show how it turns out in the end. And if you’re new to sewing coats or jackets too, maybe you can learn a little something along with me. Are you game?

As you may recall, I’ll be sewing Hollywood 1678, a jacket modeled after WWII battle jackets and very similar to a windbreaker style at the time. 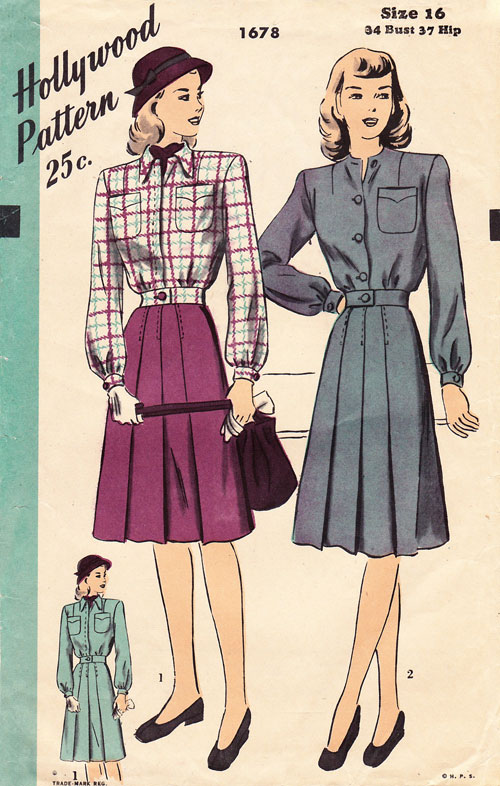 I like the collared version of View 1 the best but decided to do standard buttons up the front instead of the fly front. It will look like View 1 but with buttons, looking more or less like my mock-up below.

I ordered two fabrics, and decided on this forest green wool flannel. It’s really hard to capture correctly, but this is as close as I could get. It’s a really deep, dark color. 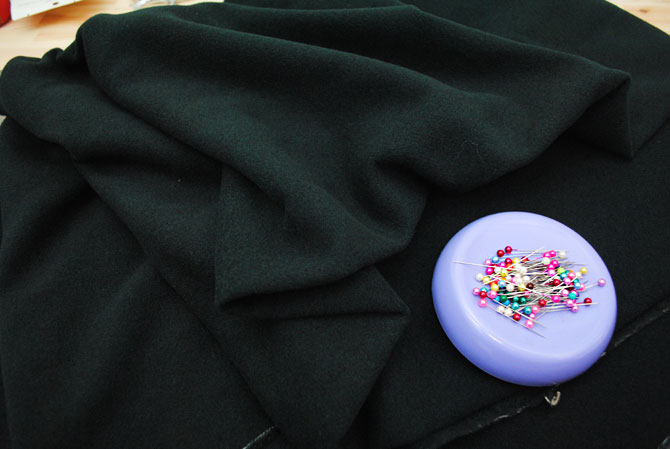 For the lining I opted for a beige rayon bemberg. Rayon is of course a very appropriate choice for 1940s, and lots of people love this lining. Of course I managed to stain it within 2 minutes of it being in my possession so don’t ask me why I went with a light color… 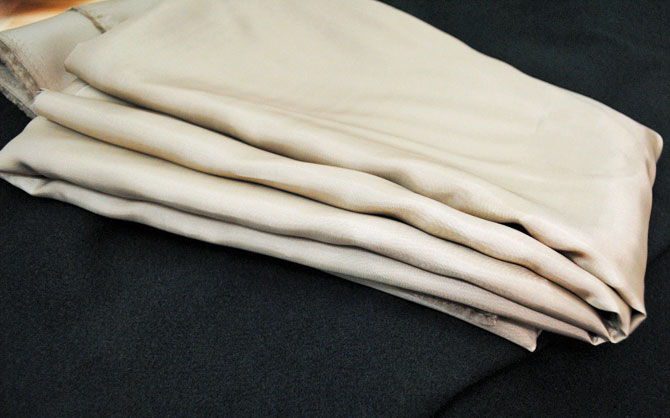 The problem with the fabric is that it’s so dark green, the vintage buttons and the silk buttonhole twist I ordered are too light. The buttons might still work, but the thread… not so much. I’m going to handwork buttonholes for the first time so I really don’t need to call that much attention to them. Ha ha.

I ordered it from Britex and it was the darkest green they had (labeled Forest, but not really forest green in my book). Any ideas for an alternative? Maybe I should do black buttons and thread. (Wish I had thought to order black buttonhole twist too!)

Where am I so far? Yesterday I cut out my muslin pieces. I didn’t want to have to do a muslin but there was no way I was going to work my first jacket without one, especially as I want to make sure I work out the gathered cuff sleeves correctly and do my melding of Views 1 and 2 right. Just for fun, here’s the chart of pattern pieces for my unprinted pattern. I’m slightly boggled why the sleeve cuff band is taller than the band on the bottom of the jacket (when it’s clearly the opposite on the cover picture), but we’ll see how that plays out when I’m sewing. 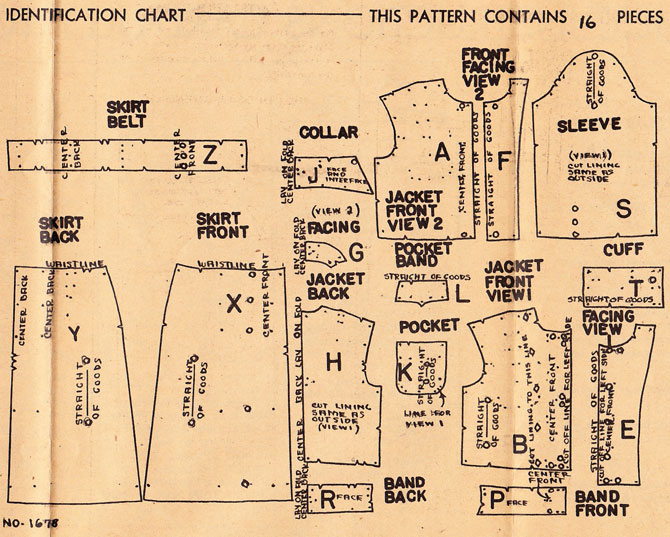 Can you see the crazy deep dart on the Front A and B pieces? It ends inside the pocket. The photo below shows the dots for where to line up the pocket, with the center dot in the middle being the end of the dart.

By the way, see that pink pen? It’s a Pilot FriXion erasable highlighter and oh my goodness, I’m in love. My mom got me a set for Christmas, having heard that they work well on fabric and that the ink disappears when you press it. So far I’ve found that to be the case on every natural fabric I’ve tried it on (of course, I always test first). As someone who seems to be plagued by disappearing ink reappearing, chalk either rubbing off before I can use the mark or not coming off, etc… can I just say I love these for light-colored fabric! 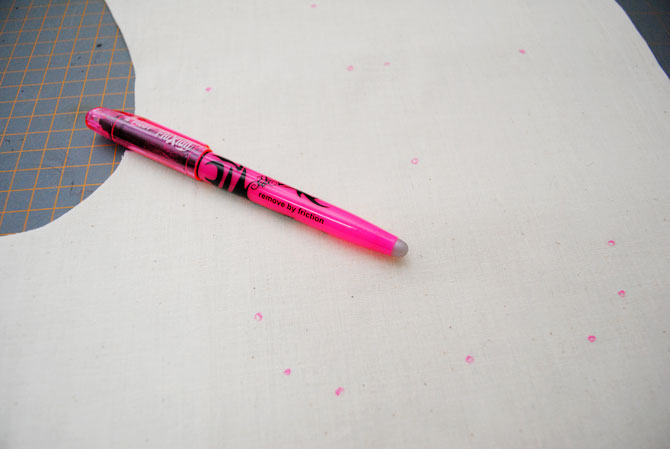 Anyway, the only change I made prior to the muslin was to narrow the sleeve towards the bottom. Even though it’s gathered into the cuff I didn’t want it quite as billowy as the pattern shows. For everything else, I decided to leave the pieces as-is to see how the muslin fits.

My original intention was to construct the jacket and the lining as written in the pattern, in part to stay true to the pattern for the sew-along and in part because I’ve never made (or lined) a jacket before! However, I’ve been a good little study bug lately and have been reading everything I can get my hands on relating to constructing jackets, lining jackets, and tailoring. I’m going to change how the jacket lining is constructed. Mainly because I don’t want to insert the entire lining in by hand like my pattern suggests. But here’s an interesting historical factoid about that! I’ve had the incredible fortune of reader Nadine sending me tons of photos of an actual military Ike jacket she owns so I could see some of the construction details! (Nadine, I can’t thank you enough for that!) She owns more than one and the construction details aren’t all the same on each, but the one she showed me has the front lining pieces sewn by machine to the front facings, instead of being sewn by hand. Pretty neat!

Anyway, since this jacket business is new territory for me, I decided to take a cue from Liz, who showed the list of couture techniques she wrote out when she was sewing her Macaron Redux. I started notes on techniques and ideas that I plan to use in this project.

I know this list will get a lot longer soon! 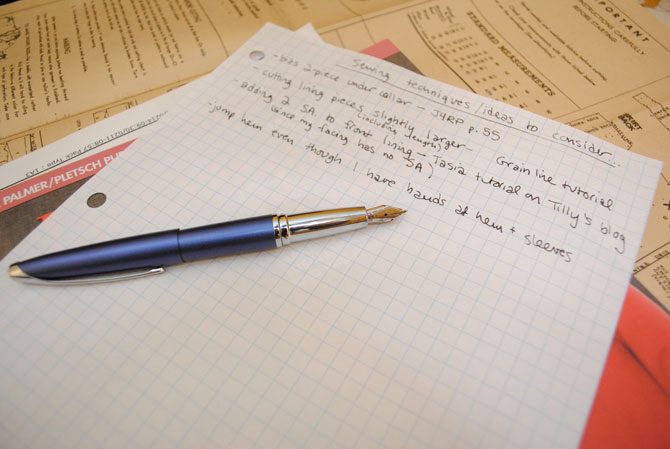