Oh dear, can I tell you what visions have been floating around in my head lately as I try and drift off to sleep? Window treatments. I hope you have a cup of tea as this is a long one. If you care not about mid-century window treatments then I won’t be offended in the slightest if you click away now. Get out while you still can.

I realized recently with a nudge from Pam at Retro Renovation that I never followed up on the progress of our living room after last summer’s retro living room fail post. Whoops! Well the short answer is you could say it’s coming along. If by ‘coming along’ you meant we did a bunch of work in September including painting and swapping sofas, then didn’t think about it for several months. And now once again are inspired to finish up the room. If that’s what you meant then like I said, it’s coming along.

I want to get a few more ideas nailed down before I share more, since we literally just changed part of the color palette yesterday! I promise I’ll share some of the details of how we’re mixing modern and mid-century in our casual living room to maximize comfort and storage. Plus you’ll get to hear the great story of a piece of vintage furniture we’ll be getting in the room later this year.

But today I want to talk about the biggest remaining source of headaches in that room. Window treatments. Oh good grief. Right now, we have the vertical vinyl blinds that came with the house. They’re not horrifying, and I’ve seen some in 50s decorating books, but they aren’t my cup of tea. I swear a good salesman must have driven through our area and sold them to everyone who has a ranch, because I see them all over the place. 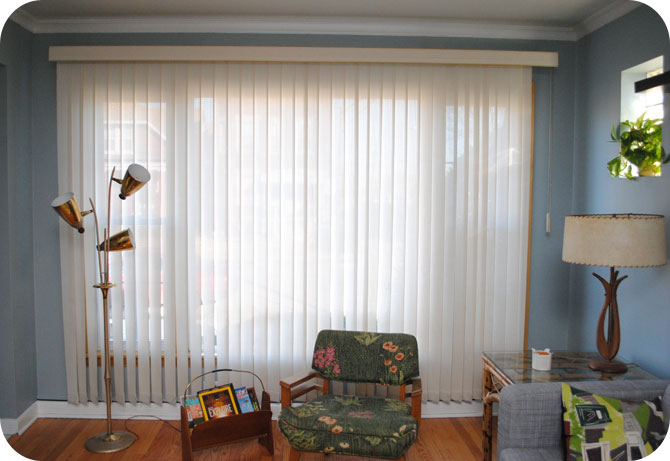 Oh hey, you can see the color we painted the walls! It’s a light blue-gray. I never dreamed I’d pick a gray for walls but 5 months later and we have no regrets. Plus it works nicely with all the colors we want to include in this room (hint: those greens you see won’t be included) and the art we’ll be featuring.

Anyway, from the start I wanted pinch pleat drapes that could draw shut but primarily be open most of the time, with something behind them for privacy from our city street: sheers or 2″ vertical blinds, probably. Pleated shades and roller shades are both nice, but I want something that allows light but a little visibility at the same time. Something that lets me look out like a nosy old lady without having to draw them up and let everyone know I’m being a nosy old lady.

Both sheers or blinds and pinch pleat drapes would be appropriate for our 1955 home. Mel wasn’t a huge fan of sheers and we both decided that in our less-than-formal living room, drapes and sheers may be a bit much anyway. But I’ve also seen some examples of drapes and blinds that I like, and now we’re pretty much settled on this combo. Although white, off-white or light gray, not like these 50s red ones, though they’re pretty brilliant! 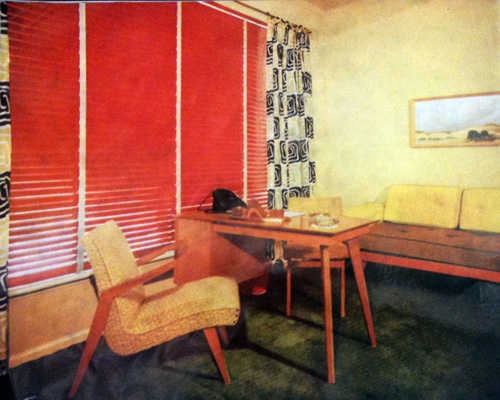 I really intended to use the window to showcase some great retro fabric, but when I calculated out the yardage required for pinch pleat drapes… WHOA. Cost prohibitive for hiring it out or even doing it myself. So that’s scratched off the list.

I can buy something off the shelf like the J.C. Penney ones I keep hearing about on Retro Renovation, but that would mean picking a light-colored neutral. I was really kind of bummed about this at first since there’s not yet a whole lot of color in the room yet, but then I realized something: you know that green patterned chair? We’ve planned all along to get it recovered in a solid color. Yesterday I realized I can pick a fun pattern for it instead!

Still debating on fabric, but it’ll be something like the below. I love the teal bottom one but I’m leaning towards the top one (top is from Melinamade, bottom from Tonic Living). The blue would pull in the teal from our rug (without being almost the same color, like the bottom one would be). The grayish goes with the walls and our sofa. And the pink could then be used as an accent in the room, which is totally different than our original color palette but is secretly exciting me. But we’ll see what the sample I ordered actually looks like. 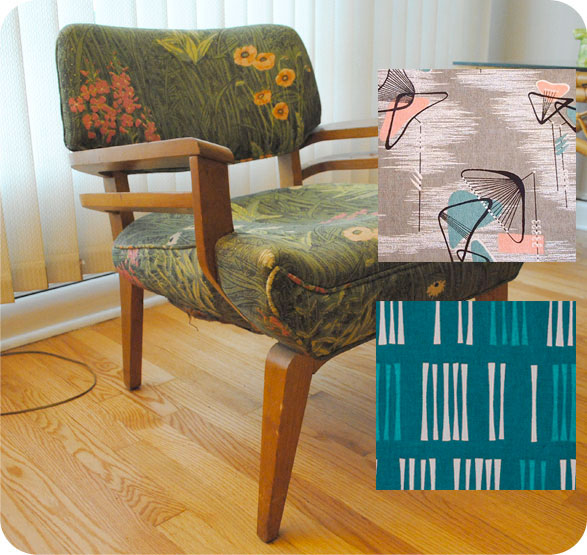 We still have some kinks to work out with the windows, so I’m curious about your opinions. It’s a big wall of windows if you take a look at the measurements. With the vertical blinds open you can see that it’s a big picture window and two small double-hung windows totaling about 112″. 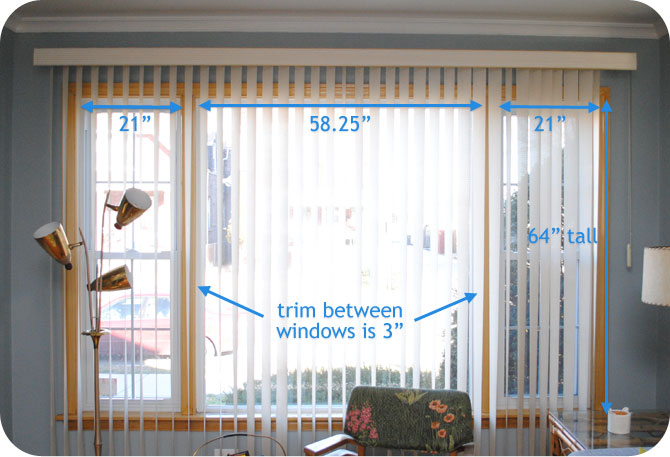 (It’s worth noting while that looks like stained wood, it’s actually painted and the paint is chipping badly, so eventually we’ll sand and paint it white to match the crown molding.)

Now we have two main decisions to make…

1- Where should we put drapery panels?

You can see right away there’s not enough room between the edges of the windows and the wall for the drapery stackback to not obscure a large portion of the small side windows. Only getting indirect northern light in this room, we need all the access to the light we can get! So I was thinking two sets of drapes. A panel to hang on either side of the small windows (going as close to the edge of the wall as we can), and then a panel to hang just inside the edges of the picture window. I think they wouldn’t be too heavy as to obscure too much of the window. 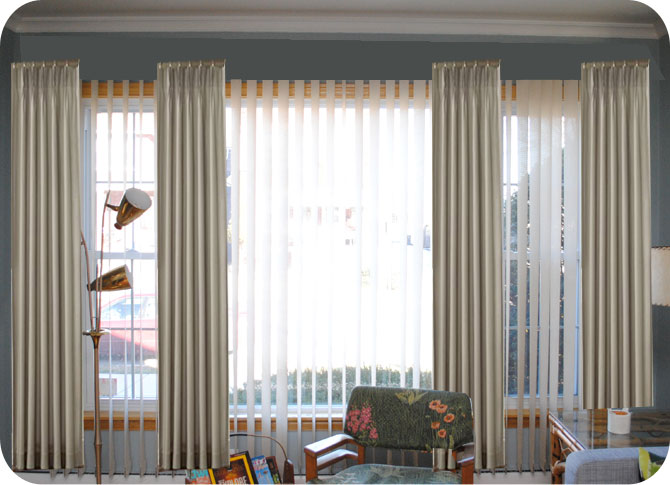 I guess what I would do is order two sets of drapes that each could cover half the width, so in total all 4 would draw shut on a traverse rod. (I’d have to wrap my brain around traverse rods, too.) The drapes could either be cream or a darker gray.

The other option would be to ditch drawing drapes entirely, and get one pinch pleat stationary panel to put on either side of the outside of the windows, maybe even starting at just under the crown molding. If we did that, I’d feel comfortable with picking a great retro fabric since it wouldn’t be umpteen million yards to buy, or I might even be able to find 2 vintage panels that matched.

It would look something like this (again minus our vertical blinds)… 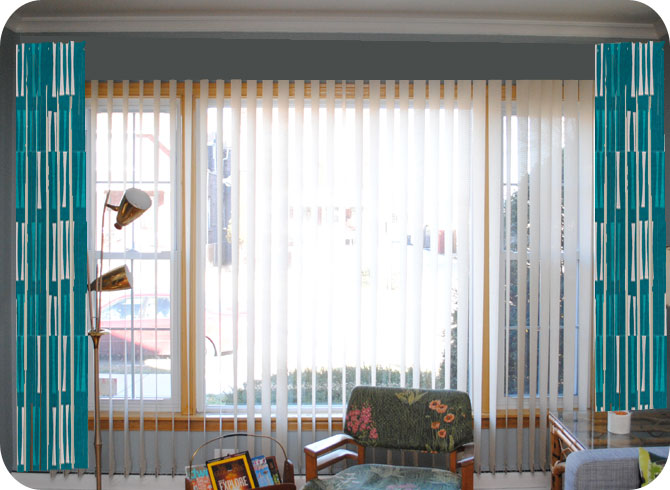 How the heck do people even hang stationary panels though, especially pinch pleats? Would you really put up a 112″+ rod just for two 22″-ish wide panels on the edges? Do you just mount them to the wall somehow? I can’t seem to find any info online about that.

2- How should we hang the blinds?

I’ve investigated and companies make blinds as wide as our entire window area, but does that seem kind of crazy big? How would they have done it in a mid-century home?

Option A. Get one big honkin’ huge set of blinds that spans the entire width of all windows. All 112″ of it. I would go for the kind with the cloth tape which is reminiscent of mid-century blinds and would have the added bonus of breaking up the big long horizontal lines. I could possibly even go for a contrasting color tape like they sometimes did in the 50s (depending on where we order the blinds… I’m not a big fan of the color options I’ve seen on Blinds.com for the tape, I wish they had gray if I was going to go for a contrast).

Option C. Get three blinds, but mount them outside the trim. That would have each set of blinds line up next to each other in front of the trim, so I’m not sure if there’s any advantage over Option A.

Truthfully none of these would really look any different to the eye if we do 4 drapery panels, as the drapes would be covering the trim between each window. But they would look different if we do stationary panels, which would not cover any of the windows. I’m kind of leaning towards A, since I’ve seen some photos of 50s rooms with mighty big windows, and they appear to be using one long set of blinds. And since the side windows are so small, I feel like individual blinds might look kind of silly.

I swear, I have contemplated every combination of mid-century appropriate window treatments known to man. Cornices, pinch pleat drapes, sheers, roller shades, pleated shades, 2″ aluminum blinds, you name it, I’ve thought about it. Endlessly. Until my brain hurt. I feel like I’ve thought about this topic to death. I’m ready to commit to a decision already. So if you have any words of encouragement or suggestions, I’m all ears! 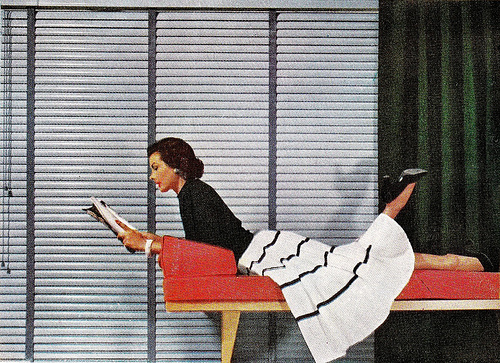