I have a confession.

But first, I wanted to thank you all so much for your delightful comments on my Knit it in Flag colors pullover! I was really tickled. I think it’s going to be really great this autumn, and I think it needs a nice pair of wide-legged trousers to wear with it! Hopefully this autumn I’ll be back in sewing mode, but right now I’m in knitting and decorating mode. 🙂

Now, onto the confession. You’re dying to know, right?

Readers, our living room is one big, huge, FAIL. There, I said it.

As I’ve mentioned, we’re only just starting now, after five months in the Golly Ranch House, to really think about painting and decorating. We’ve made a few furniture purchases since we’ve moved that we thought would work out, and we’ve been trying to make our previous furnishings work since of course we can’t go out and buy all new (or old) stuff.

Five months in, we realized this was a stupid idea. This was not us. We can only comfortably sit three adults in the den. So friends over for a movie? Difficult. Not to mention it’s a small room, so setting up our Wii (which we don’t use a ton, but we’d like to be able to when we do want to) or our turntable isn’t possible. Dumb.

We considered swapping the t.v. into the living room, but the fact remains that it’s the coldest room in the house (a fact that will not change, though will hopefully eventually be improved by lined pinch pleat drapes). In winter I want the option to be able to cozy up in the warm den to watch a movie. This meant a new t.v. for the living room. We struggled for a bit with being a two television household but whatever. We got over it.

But something else was bugging us about the living room, other than the lack of a t.v. and inability to play any music whatsoever, since of course we didn’t bother setting up music in a room we never seemed to use. We were trying to cobble together too many things that didn’t work. For awhile, we thought “oh no, art and color on the walls will perk it up”. That wasn’t it.

Eventually, we faced the fact: our living room is a retro fail. So here I am, airing my dirty retro decorating laundry. This is the living room that we hate. 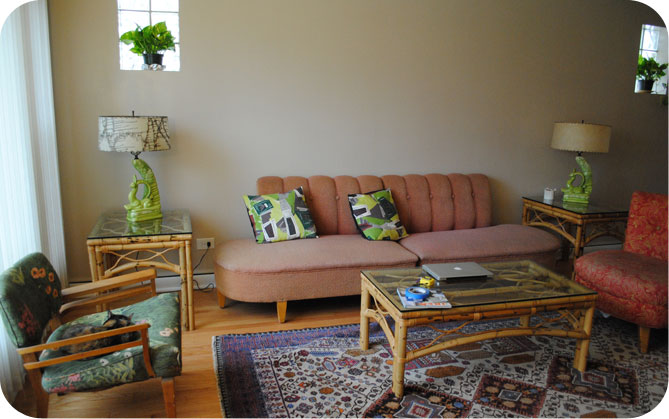 It’s not horrifying, no. Sure, any of the pieces on their own are pretty fabulous. But all together? It doesn’t work. For us. It’s awkward and uncomfortable. It doesn’t make us want to hang out in it. Here’s why.

And the other half: 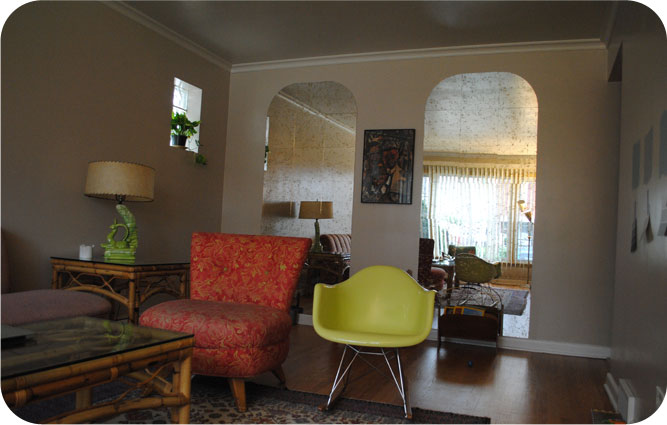 (And in fairness, the chartreuse Eames repro chair is only next to the other chair for color inspiration purposes, so it looks awkward where I put it but it’s not an actual design issue in the room.)

Like I said, we thought getting some paint up on the walls would help, so we diligently went through two rounds of paint samples, initially staying with lighter greens because of all the green we already have in the furniture and our two lamps, and then trying some darker greens and greys in a second round. 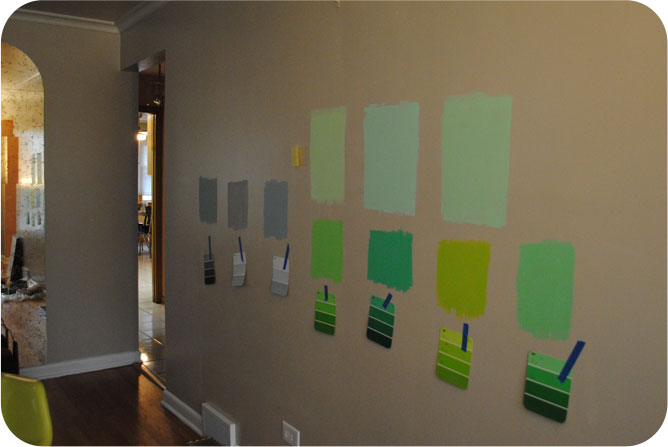 But wait, that photo needs a caption. 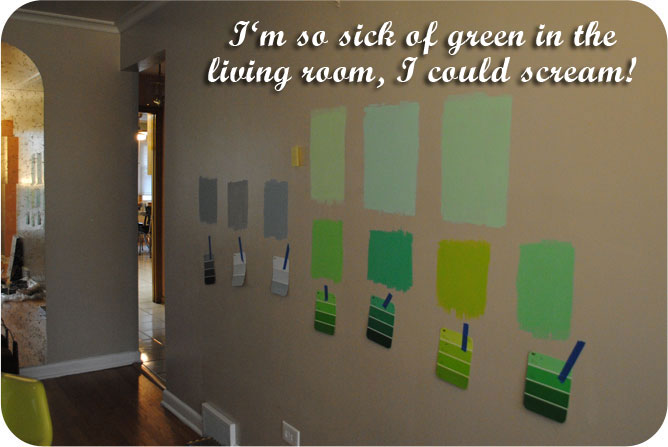 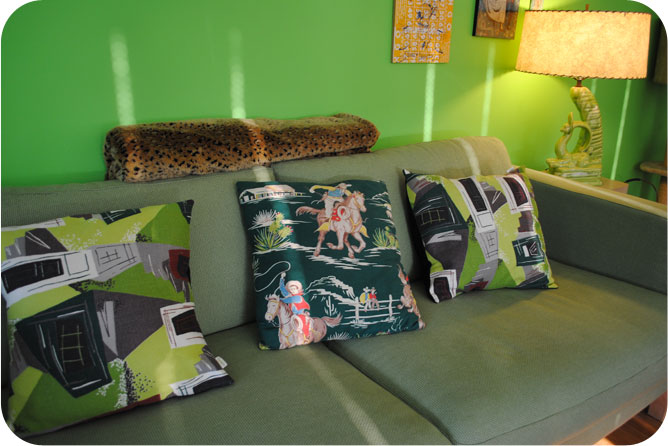 But if not green, what? How do we incorporate the furniture and decor we own and mix in new things? What needs to get reupholstered, and what just needs to leave the room already?

This has been our struggle for the last few days. And finally, we hit on it. I’m not going to go into details yet, but we’re comforted in seeing some examples after countless hours of trolling the Internet for images and ideas to prove that our ideas aren’t completely crazy, nor completely out of touch for our modest vintage ranch.

All I’ll say now is we’re going to mix a bit of contemporary with a bit of vintage. We’re going to breathe new life into our older comfy sofa (the green one above) in three ways, and get the Danish modern (don’t know if it’s exactly Danish modern) chair reupholstered in a nice, bright color. Actually the shape is so cool, it’s worth a closer look… 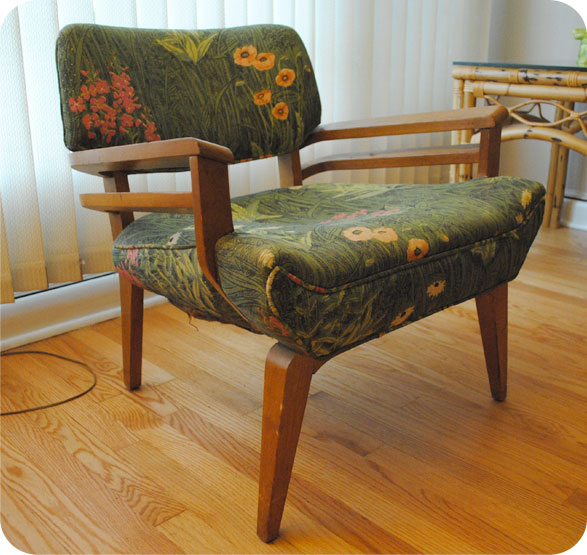 We now know the piece of furniture (once we find one) that will make the mirrored wall work, and how we’ll use it to make a second focal point in the room, instead of the strange space it is now. My dad will be in town briefly over Labor Day weekend, so we’re enlisting him in installing our new t.v. on the paint samples wall and fleshing out the idea we have for an entertainment center, inspired by a suggestion he made.

In the end, you can see the only things that will actually remain in the room from the two photos I showed above. 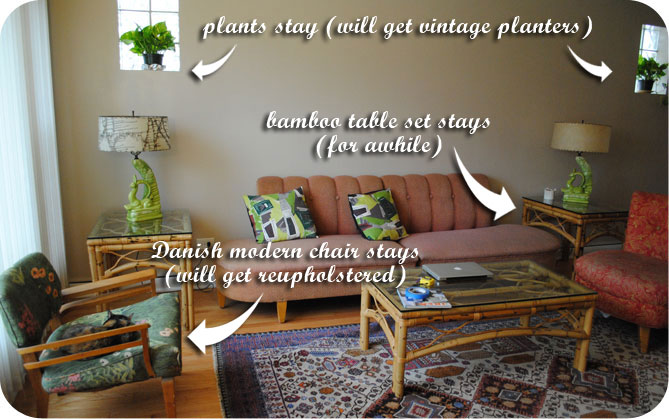 Newly purchased plants will get vintage planters. The Danish modern chair will get reupholstered. The Eames repro rocker will stay. My grandpa’s painting that’s between the mirrored panels (it’s only up there currently so it’s not sitting on the floor) will be reframed. The bamboo end table and coffee table set will stay for some months most likely, eventually to be sent to their original intended location in the basement (where they will hang with the pink sofa), to be replaced by other solid wood vintage pieces. Everything else shown will get re-purposed in other rooms.

After weeks and months of having no idea what to do with this room, we finally have a shared goal in sight. We have struggled and struggled in this room. Seriously, dear readers, I was growing to hate my own living room! Not now. I can envision almost every single thing I want to happen in this room. I’m so excited, I’m about ready to pop. (I promise I won’t.) Slowly over time, I’ll share our plans as they develop.

First up? Painting next week. A color I would never in a thousand years have thought I’d paint on the walls in my home, until we made a joke in the paint department of Home Depot and realized we may actually have hit on a good idea: grey. It’ll be our neutral palette to bounce off of. Somehow freeing ourselves of color on the walls opened up a world of possibilities for us (who knew?). It’ll work, it’ll rock with our other colorful plans, it’ll be awesome.

And when we’re done with it all, hopefully we’ll have transformed this retro fail into a retro win. Stay tuned to find out if we can pull it off. I have plans to share every step along the way!