Hi everyone! Yes, it’s been rather quiet around here. My mom and step-dad have been in town. We’ve had a full house pretty much all of July!

Yesterday, my mom and I worked on a sewing project together. Neither of us could even recall when was the last time we did that. I was probably in high school!

Here’s a couple of snapshots she took of our work in the basement. 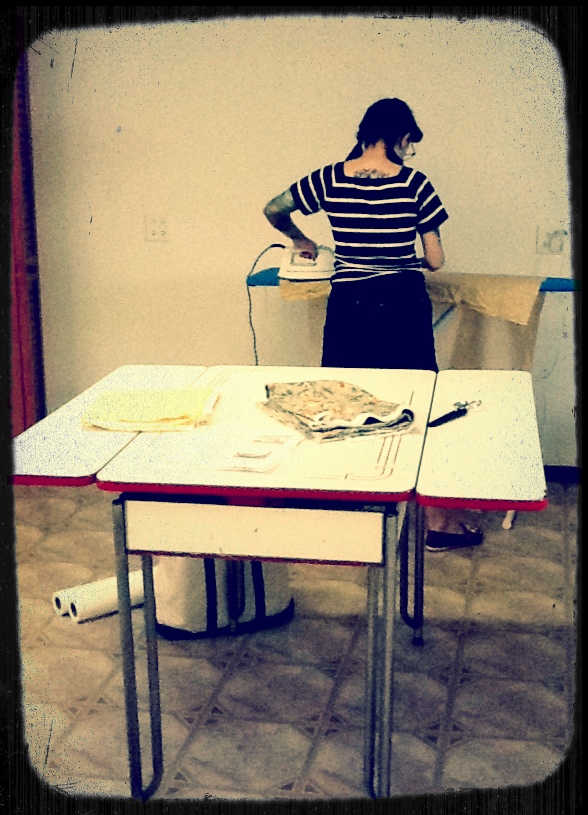 You can see our new dinette table that I’ll be using in my craft area. They brought it all the way from Maryland with them. It used to be in the restaurant of family friends, who had a few in storage after expanding the space some years back, and they kindly allowed me to pick one for my very own! You’ll see more when I get to the point of actually taking photos around the house… which will probably be after painting… which will probably be this autumn. 😉 I’m not quite sure the era, I’m guessing 30s or 40s. It’s definitely much older than our 50s dinette table that’s our dining table. 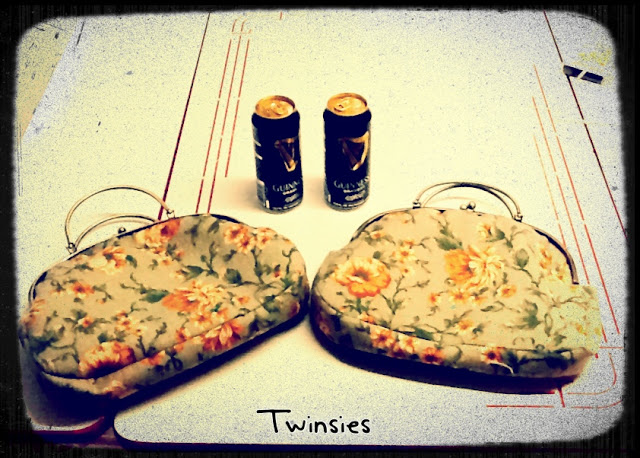 My mom’s description and photo setup, isn’t she cute? The Guinnesses were not to drink, but to hold the purses open as we had to glue the frames on. We used the same outer fabric and different linings, and then swapped linings for our pockets. I know, I know, commence a big “Awwwwww” right now. My mom did most of the sewing, I cut the pieces and did a bit of basting, and we both attached our own purse to our own frame. They really are fabulous and I think it’ll be a great purse for summer into autumn. For those of you interested, it’s the Gracefully Kelly pattern.

I hope to get back on track with the blog world soon. Our best friends in Chicago are moving out of the country this week (though we’ll now have friends to visit in Wales) and I haven’t really been excited to document all the goings on in life lately. Though another thing that may keep me a bit more quiet than usual—as you know the Olympics start this Friday. What you don’t know: I’m a huge, rabid Olympics fan (though much more winter than summer). I’ll be participating in Ravelry‘s Ravellenic Games 2012, so I’ll basically drop all crafty projects for 2 weeks except for a new project I’ll be knitting specifically for the games. They will be fair isle legwarmers for autumn, which I think will look darling with some land girl-esque boots and 40s wool skirts (yes, it’s going to be 100 out today and I’m already plotting my cooler weather wardrobe!). I’ll be using a chart from a fair isle sweater pattern, with Shetland wool, and making up the legwarmer pattern on the fly. Hopefully I’ll be able to complete them during the Olympics. In 2010 I was able to complete a sweater (albeit worsted weight) and fingerless gloves, so I set the bar rather high for myself! I’ll definitely check in with at least one or two progress reports during the games. Let me know if you’re participating, too!

I hope you are all doing well and enjoying yourselves! ♥