Hi everyone, I’m back home! I have massive catching up to do on my feed reader. My, how everyone’s been posting like a maniac!

We had a lovely, albeit somewhat brief, trip to my mom’s outside of Washington, D.C. I’m sorry I didn’t get to meet up with any D.C. bloggers, however with Thanksgiving and a family party, and my best friend from college visiting too for part of the trip, time was very limited.

Just before we left for our trip, I finished up my latest sweater! I’m over the moon about it. The pattern is Bestway B2637, called Fair Isle Cardigan. You can purchase the .pdf here, and find it on Ravelry here. I don’t have an exact date, but the pattern is from the 1940s. 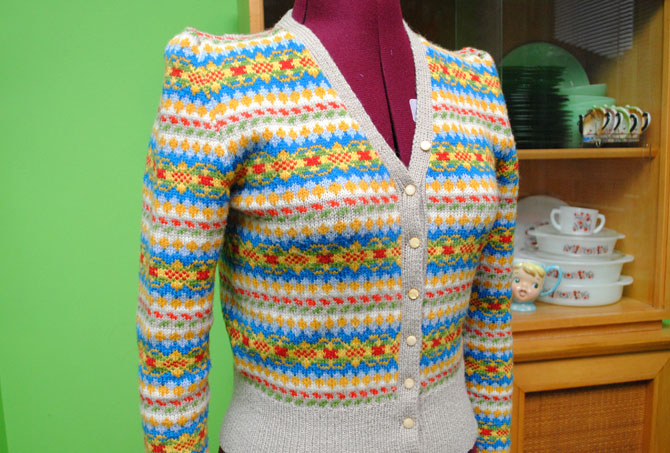 You can see I didn’t stray very far from the original pattern colors. I liked the color scheme so well I didn’t see a need to go in a different direction. Lately I’ve been more inclined to do that with vintage colorwork patterns, because I like the original so much. 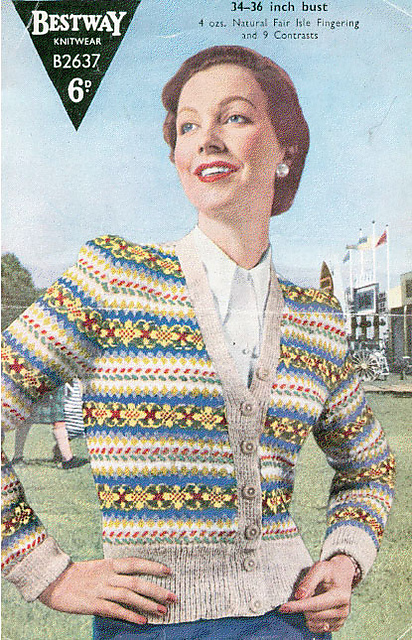 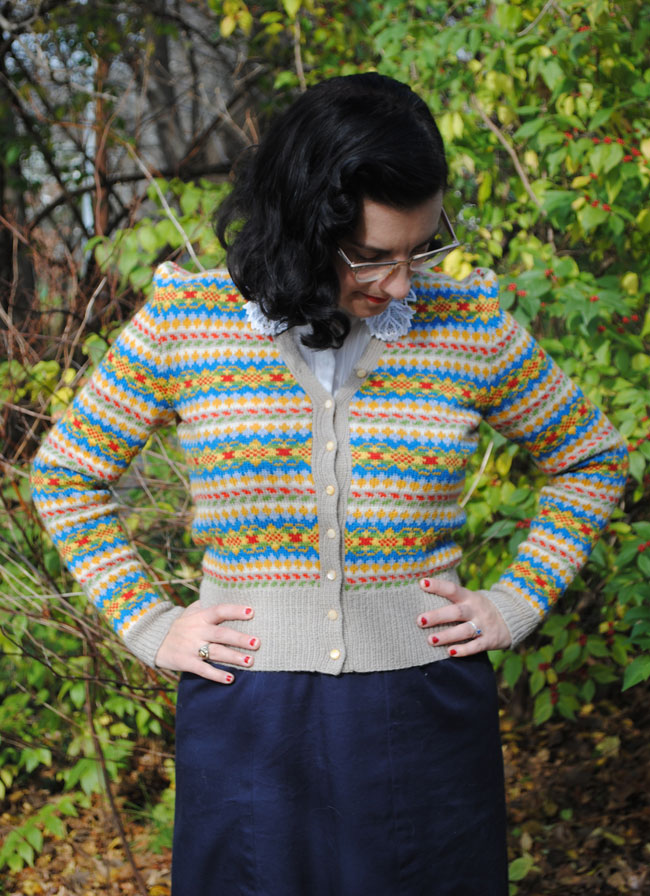 Changing the gauge as I did, I also had to tweak the sizing a bit. The final width around the bust is 1″ larger than my full bust. While it looks like there is shaping to the body, there isn’t. The ribbing is knit on about 10% fewer stitches than the body, then in the first body row I increased to the full number of stitches that was knit with all the way up to the bust.

(Oh yes, here’s the new haircut too! Only this isn’t representative of how it looks after a fresh set, but is how it looks the day after if I don’t put rollers back in at night, except for my bangs. So they are much softer curls.) 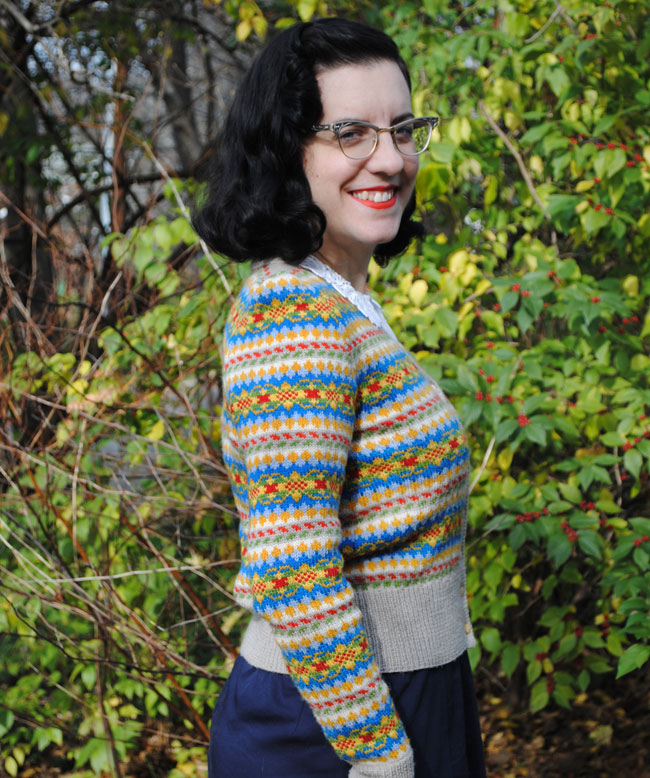 The complicating factor about changing the sizing of an allover colorwork pattern is making sure the colorwork lines up the way you’d like it to. That took a little bit of doing. I started by charting out the pattern, so I knew it was 16 stitches across for one pattern repeat. I decided where I wanted the center stitch across the back to be, and worked around to the front from there. 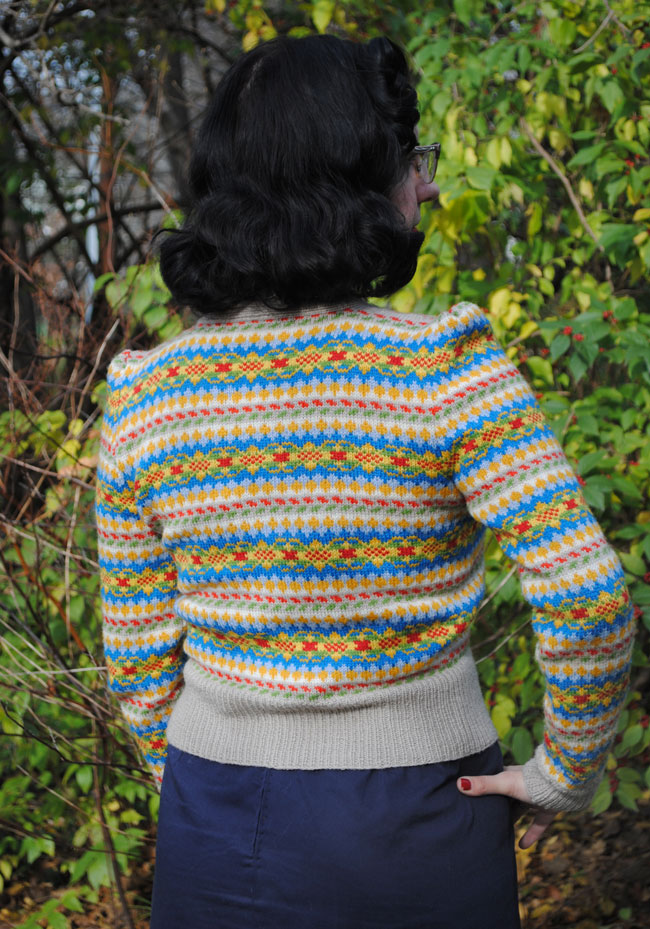 I knit this with a combination of yarns. Mostly St-Denis Boreale, with a bit of Jamieson’s Shetland Spindrift and KnitPicks Palette. I knew the Shetland yarn was stickier than the other two, but it was just the right gold I was looking for and all the yarns played well together.

Because I changed the sizing in the pattern, I had to change the sleeve cap. I wanted the rows of the pattern to match up from the sleeve to the shoulder, so I had to make sure the sleeve cap was two things: 1) exactly the same number of rows as the upper body of the sweater (from armhole to shoulder shaping), and 2) started at exactly the same row on the chart as on the body after the armholes. The excess ease could not be worked in along the pattern, otherwise it would throw off the row-to-row seaming. So I gathered the sleeve caps at the top when setting in the sleeves, which I did with mattress stitch. 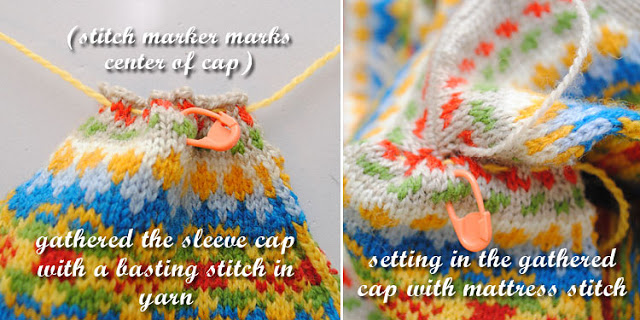 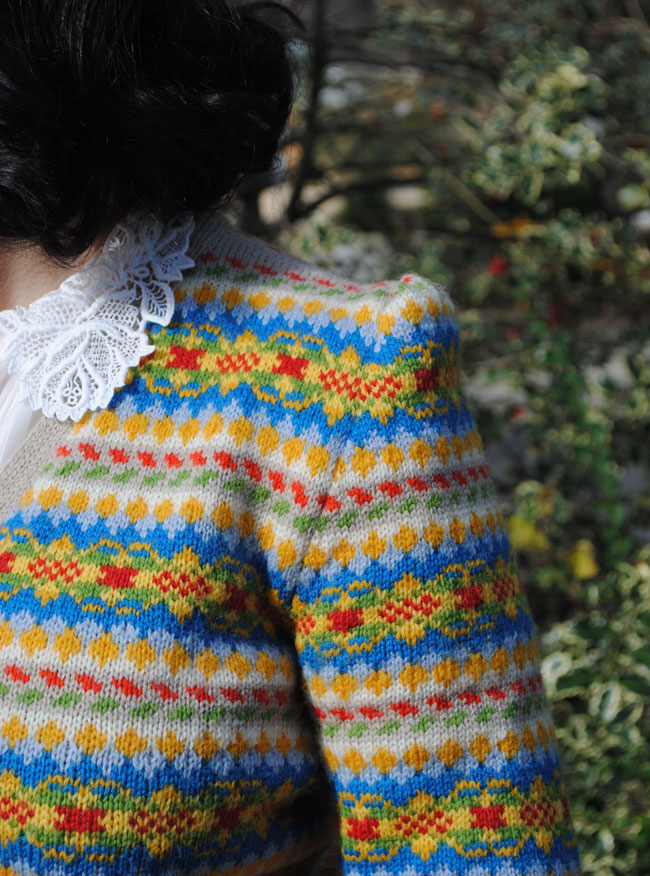 This project was steeked. A steek is a bridge of extra stitches knit where you would like an opening to be. You later cut through the steek, leaving the opening. One major benefit of steeks when used in stranded knitting is not having to slow down to purl in a stranded pattern, as well as being able to cut away all loose ends so you don’t have to weave them in.

In the body of this sweater, the front of the cardigan and the armholes were steeked. I also knit the two sleeves together separated by steeks for the length of the sleeves, then for the sleeve caps. Once they were cut, I seamed up the sleeve seams. I could have knit them separately, but it ensured they were perfectly matched and I didn’t have to weave in any ends. 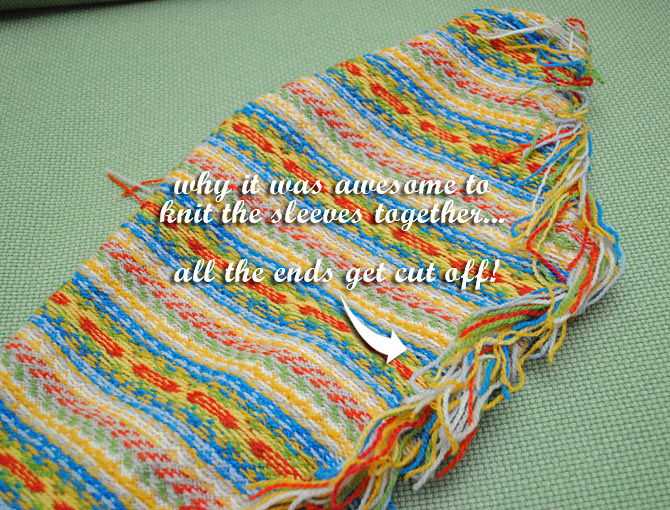 I reinforced the steeks with sturdy hand stitches prior to cutting. This wasn’t really necessary with the wool I was using, as it’s grabby enough not to ravel, however it leaves a very neat and tidy edge inside. I didn’t even bother to tack down my steeks. (Incidentally, these are all topics I’ll cover in the long term in Colorwork: 101! But I’ll be writing up more posts about basics, first. I did post a number of photos with explanations on my Ravelry project page, if you’d like to see more.)

The lumpy bits you see at the top of the shoulder in the below photo is from the end of the sleeve cap steek and the gathering of the top of the cap. This actually worked a little bit like sewing in a shoulder pad, so I didn’t need to make any! 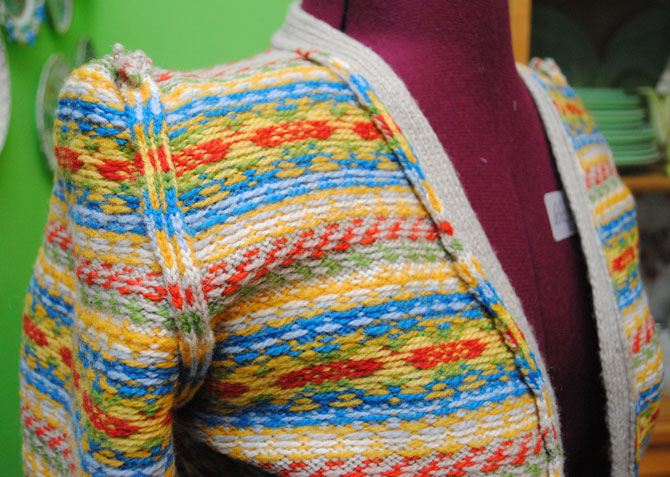 I’m just in love with this cardigan. The fit is perfect and I love the design and colors. I’ve worn it several times since I finished it, and I only finished it last Monday. Even though I have a million other projects planned, it makes me want to run right out and knit one just like it, but with another colorwork chart. I had a couple of people yesterday on Ravelry say it reminded them of the 1940s Shetland fair isle cardigan that knitwear designer Kate Davies posted about on her blog, which is a huge compliment to me. 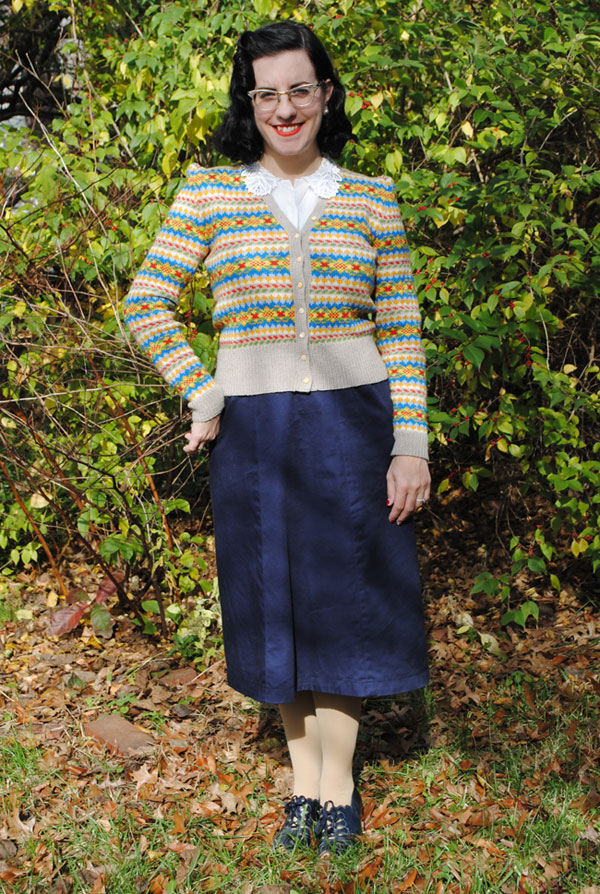 I hope my sweater looks as good in 70 years as a real hand-knit one from the 1940s does now! 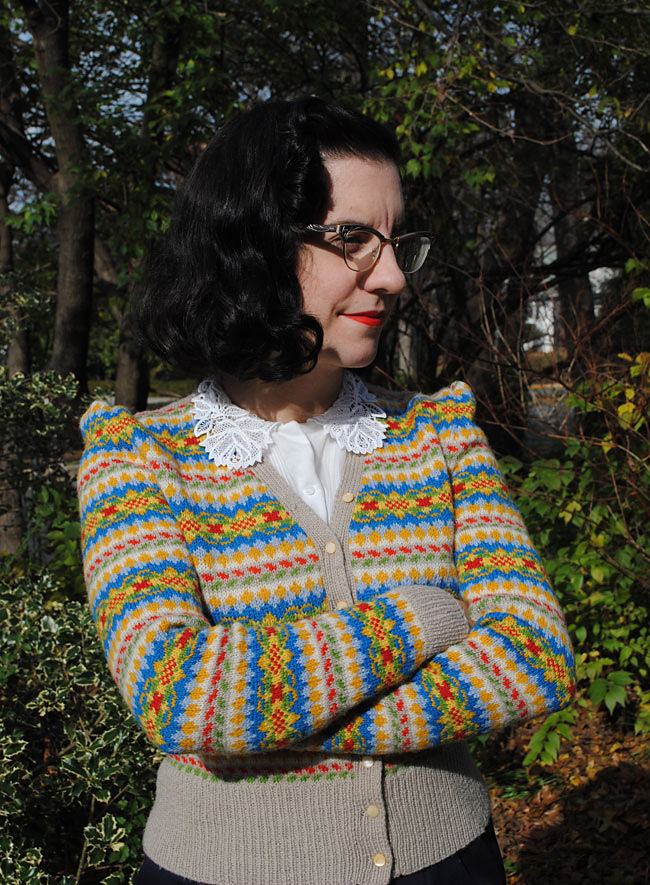