Autumn! Crunching leaves, cooler temperatures…oh I know, I know, it’s still summer! But if I don’t start thinking about fall/winter sewing and knitting now, I may not get to the projects I have in mind until it’s starting to warm up again next year!

August is when everyone involved in school life beings to gear up for the start of a new school year. While my own 10-year college reunion took place two years ago, reminding me that it’s been quite some time since I headed back to school in September, I’m not sure I’ve ever really lost that feeling that a new school year is about to start. And that’s had me thinking a lot lately about campus-inspired vintage fashions for fall!

I’ve been having a marvelous time bouncing around ideas for my fall wardrobe. I’m thinking about basics this season: pieces that that would have served me well if I went off to college in New England in the 1940s (instead of the mid-90s as I actually did). I’m picturing crisp blouses, trousers, plaid jackets, wedges. Loafers and socks. Smart printed dresses that could be layered with cardigans. Slightly oversize handknit pullover and cardigans. Like many people I rarely think of the old adage “less is more” in terms of clothing and accessories, and my small closet is busting at the seams as proof. I’d like to simplify a bit for fall and try to focus on less pieces. Great staples that I can mix and match as opposed to just more pieces, period.

In order to do that, there will have to be some accessories to pair with the basics to to keep things interesting! Perhaps fun scarves, brooches, earrings… souvenir jewelry from all of the places I traveled to during my holidays away from school to remind me of my adventures when my nose is buried back in the books. That’s a good excuse to occasionally include a peasant blouse or my Mexican felt jacket in the lineup, too. (This is built around a fantasy, after all!)

I’ll share some of the photos that are inspiring me right now! Some straight off a college campus, some just along that vein.

I like the variety of clothing in the photo of these college girls playing cards below. Two basic pullovers, two basic dresses, and a plaid skirt peeking out under the table.

I like the well-worn saddle shoes, wool skirt and plaid shirt below on the girl to the left. And there’s knitting in the far corner! Those do look like they might be handknit socks, though it’s hard to say for sure.

Here are a few images from a 1940 LIFE magazine spread on the popular campus trend at the time of wearing men’s clothing. This girl was wearing men’s trousers, shirt and moccasins (though I think of those more as loafers)…

Men’s trousers paired with an oversize pullover on one girl, and with suspenders and dress shirt on the other…

I particularly like these girls since they were from my alma mater. The girl on the right is wearing argyle socks with her plaid men’s blazer.

I love the slacks featured in this 1943 Sears catalog, combined with tailored blouses or what looks like a t-shirt (even though it’s called a pullover)…and as low as $1.59 at the time! I’d happily wear any of their outfits, head to toe. 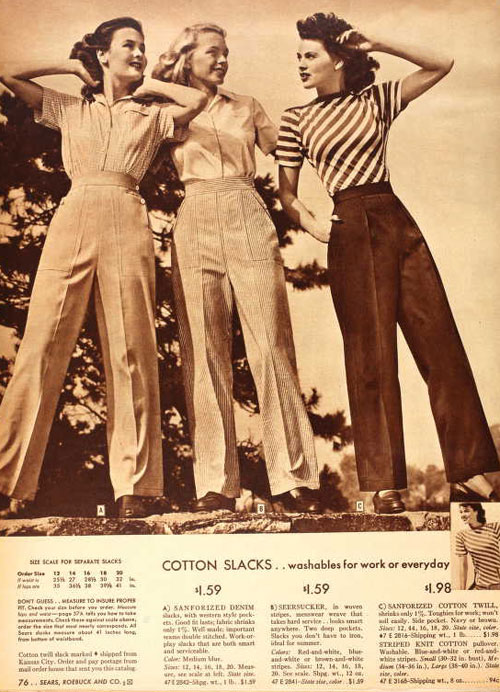 These “Lady Hercules” overalls, trousers and jacket were designed as work-wear, but I’d include them in my casual wardrobe… 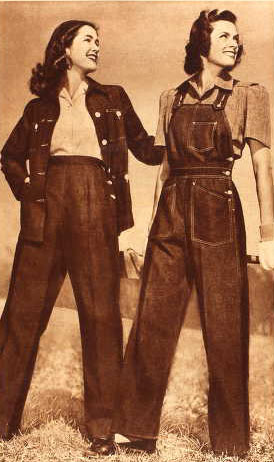 Dresses like these in checks, plaids, and solids would pair nicely with knit cardigans to transition into cooler fall temperatures… 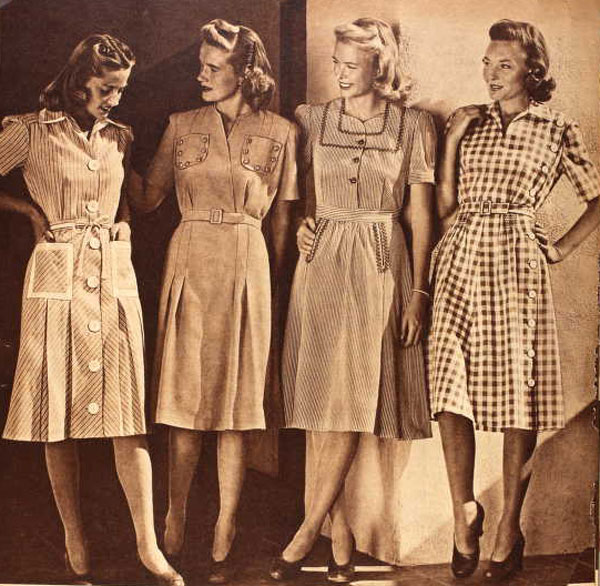 Now I don’t usually go for plaid skirts, but they are unarguably a campus staple in the 40s. These girls sure look sharp. 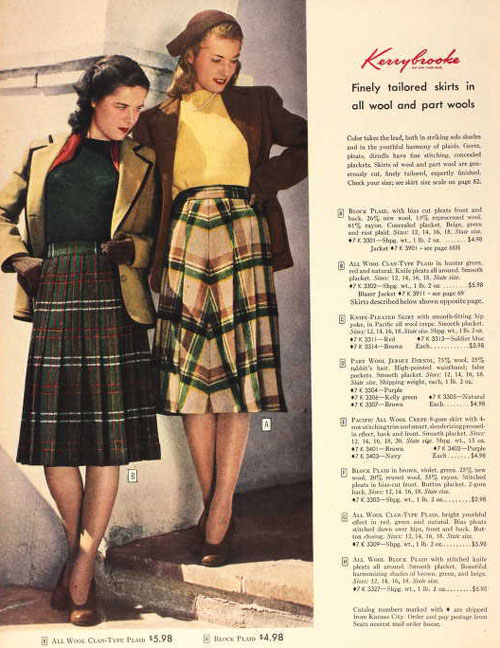 I know I’ll need to knit some good staple sweaters this fall. I’ve had my eye on this pattern for awhile, and have even set aside some bright red yarn for it. We’ll see if I get to it before winter. 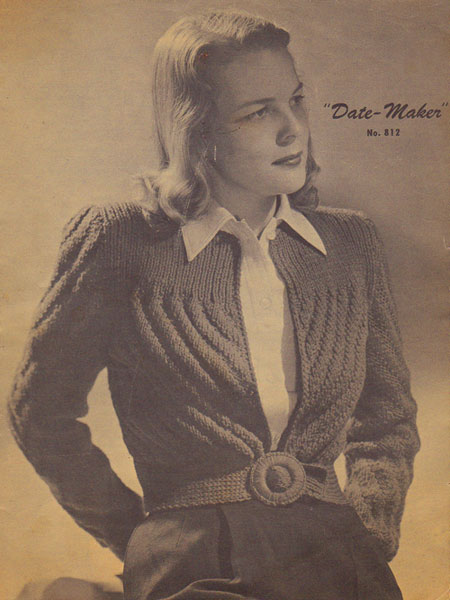 This pattern from 1945 says, “Try and top it…Just what you’ve been wanting…long sleeved pullover, its stripes sharp and clear”. I definitely think of stripes as fitting into a campus look. (A good thing, too, as I’m currently knitting a striped cardigan.) 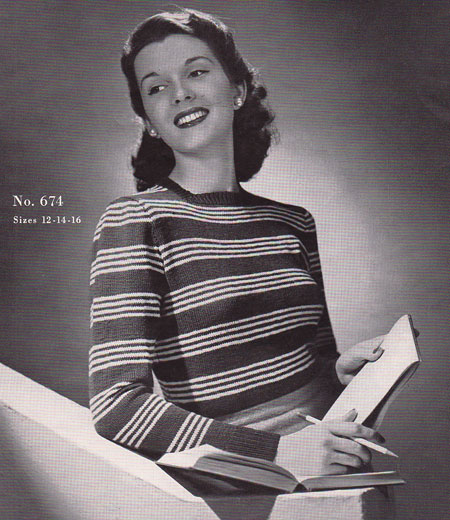 Lately I’m loving the look of slightly oversize and longer sweaters. These boxier pullovers and cardigans were very popular in junior and women’s fashions in the 1940s. Here are two examples below from the 1946 Sears catalog… 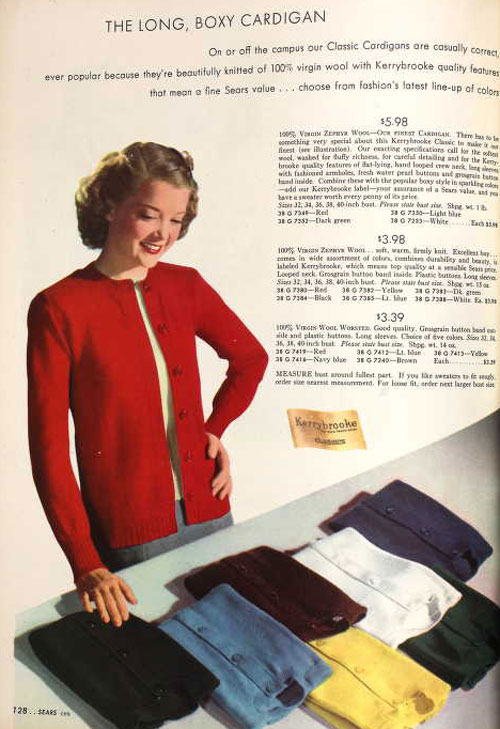 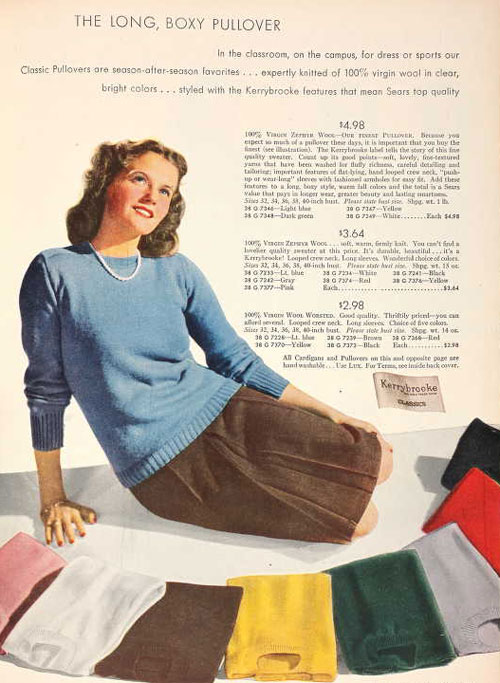 Here’s another version below from a 1940 knitting booklet. This pattern is called Rough Diamond. The amusing thing is the description says it’s a “cardigan with super-pockets”. What’s a super pocket? I admit, pockets are pretty super in general! I will definitely be knitting at least one cardigan with pockets this fall or winter. 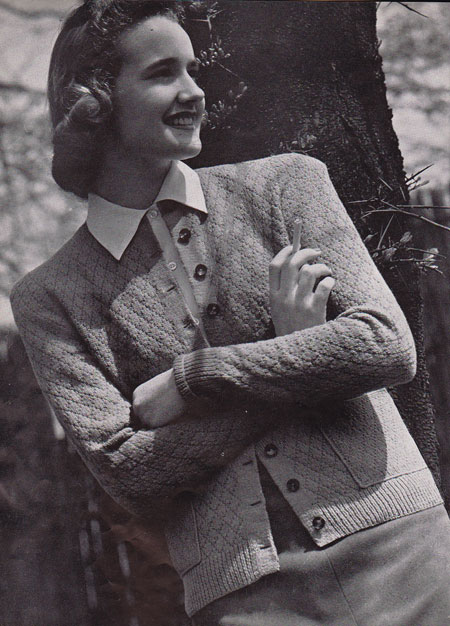 And in 1945, Sears featured several cardigans of this general shape, including a variety of necklines from a crew neck to a v-neck to a shawl collar on what they’re calling a Shaker sweater. 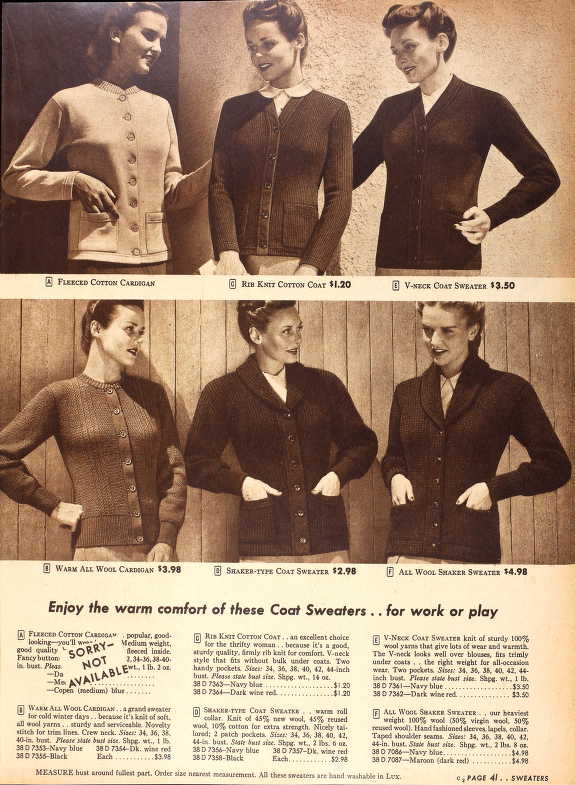 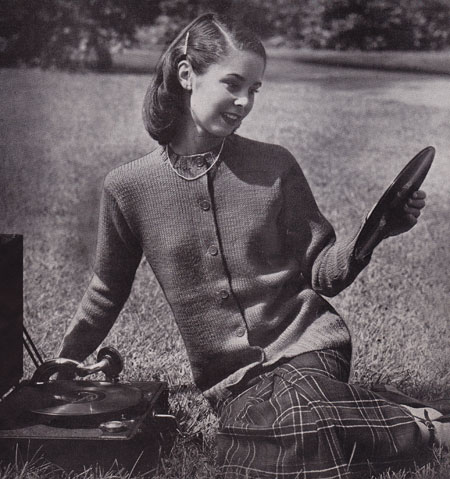 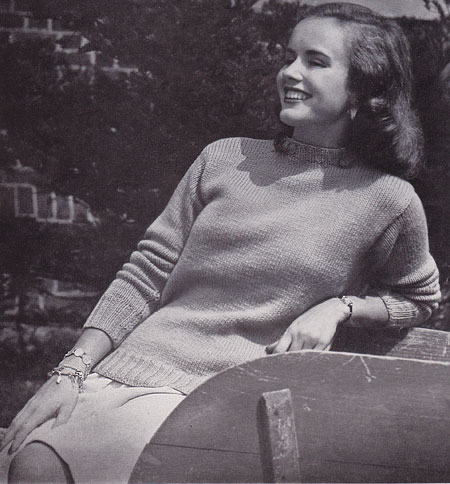 Of course, sensible shoes will be a must. I don’t wear heels that often but adore the cutouts on style K shown below… 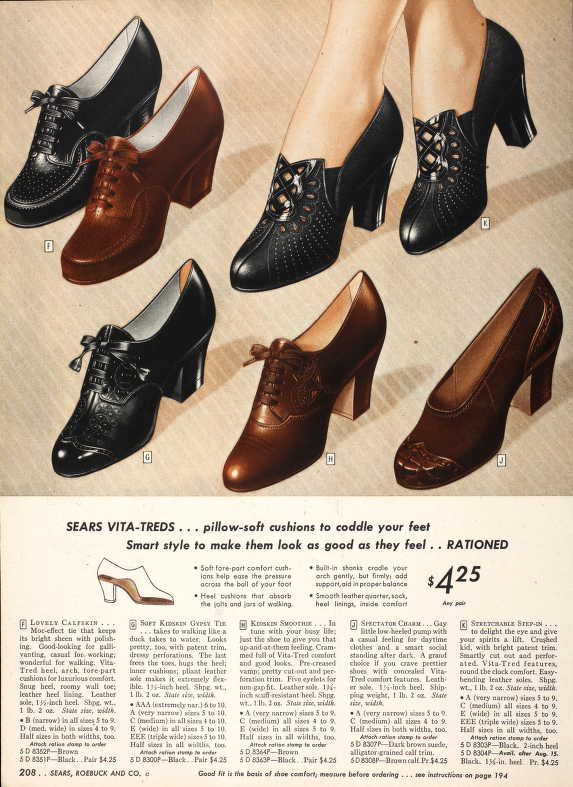 And I love all these “casual wedgies”… 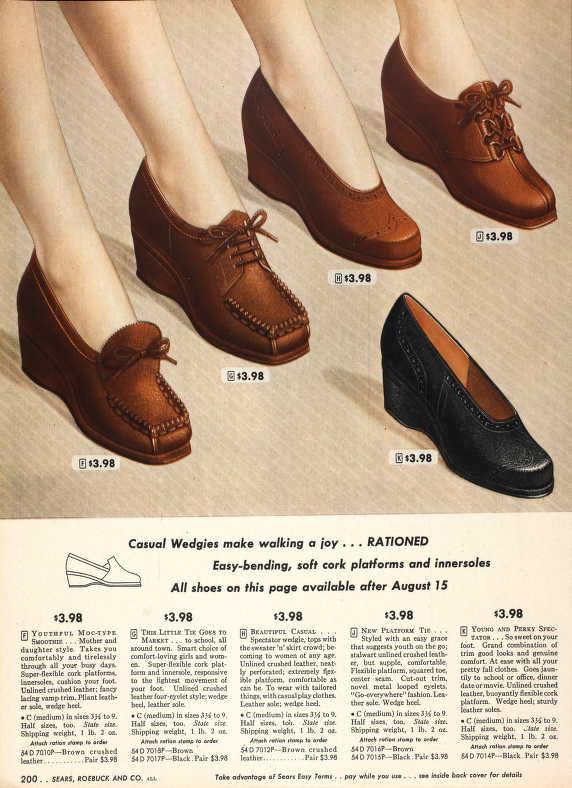 Solid-colored blouses fit the look, too. I’m so used to wearing patterns that these white blouses are very appealing to me right now. 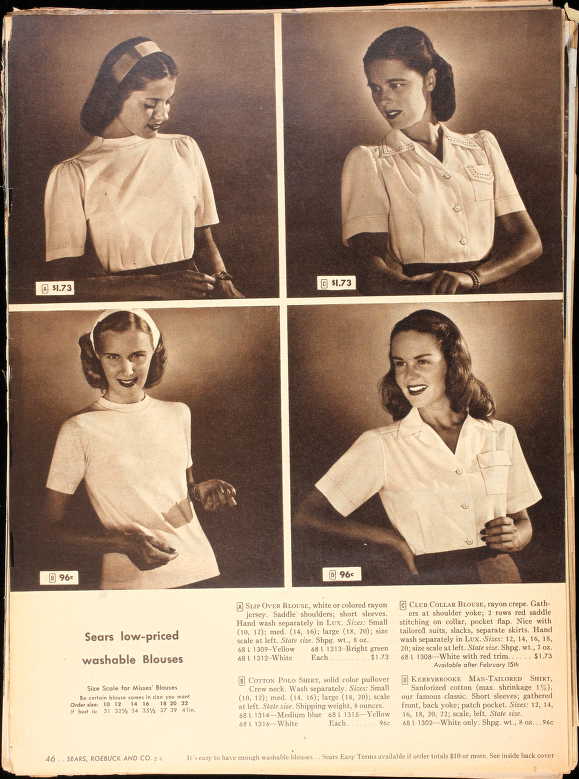 I’m finding all kinds of inspirations for fall and am already starting to think about how I may incorporate some of these campus-inspired fashions into my wardrobe. There are items in my closet that I can build on: a few pair of “sensible” shoes, cardigans, a couple of pair of dark trousers. I’m really lacking in solid-colored blouses, so that will be a sewing priority for sure. I also need to knit a boxy pullover, and a cardigan or two. I’d like to sew at least one pair of trousers as well. And I’ll need to hunt down a solid-colored tailored fall jacket to contrast with my more casual plaid, boxier ones.

I don’t know what ideas and inspirations will actually turn into reality, but it sure is fun to think about. I hope I’ve helped inspire you some! Have you started thinking about fall yet, too?