I’m so happy to report that my dress is complete! Friday afternoon I put the finishing touches on the sundress I started last weekend.

I’d been getting increasingly frustrated with sewing lately and finally realized what was bogging me down in several of my abandoned projects: the muslins. I decided I just needed to take a chance and wing it without one, so last weekend that’s what I did. Not having a long history of sewing under my belt I don’t have nearly the fabric stash of some, but I rifled through what I do have and came up with a nice printed cotton. Just something I picked up at JoAnn’s—in fact it actually says in the selvedge it’s made for JoAnn’s. Can you believe it? It’s such a great print, isn’t it? It definitely has a vintage feel to me. I know many of you commented on it when I posted about my zipper earlier in the week. The only funny thing about it is that the leaves are printed so that they go side to side, not up and down, which is slightly odd. I promise I didn’t sew it against the grain. 😉 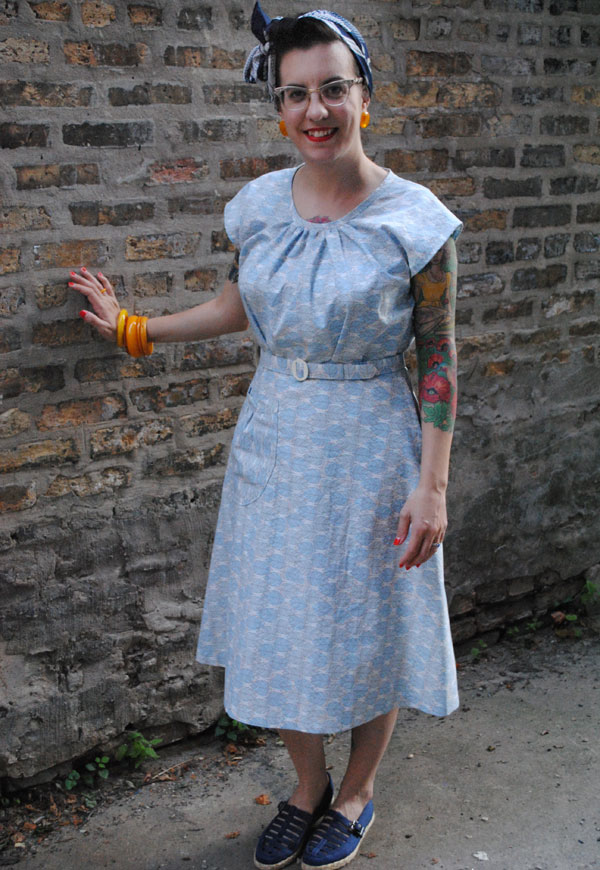 (Sorry some of these photos are a bit grainy, we were trying to beat sunset and taking photos quickly behind our friend’s apartment building.)

I used New York Patterns 1067, a casual sundress with a bound, gathered scoop neck, one ruffled, gathered pocket, two soft pleats at the front and back bodice, a tied belt and full skirt. Any guesses on the year of this pattern? All I could turn up about the company was a Wikipedia blip that mentioned it was in business until the early 50s. 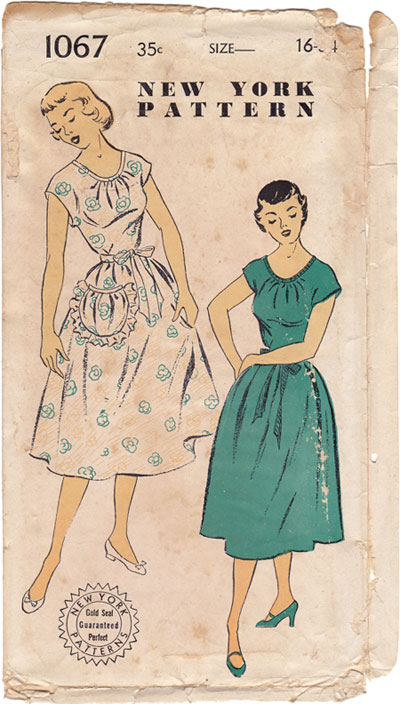 I made a few changes. I omitted the ruffle around the pocket and instead of making a tied belt, I used Casey’s belt tutorial and made my own belt with a vintage buckle. I really like how both the pocket and belt came out, even if the instructions for sewing the pocket were a bit goofy. I just did what I felt made more sense and it worked fine. I used the fabric off-grain for the pocket and belt so that the leaves would go right side up for a bit of visual interest. I love the cute gathers on the pocket! It’s a fun detail that mirrors the neckline. 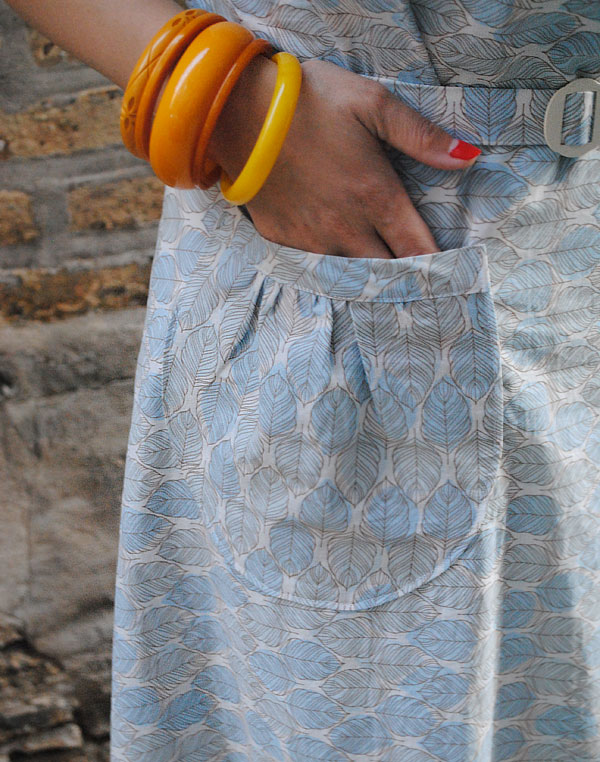 I also made my own 1/2″ bias tape to use around the inside of the armholes. I didn’t topstitch the binding after turning it to the inside, however, though that seems to be the more usual application. Instead I did a blind stitch hem by hand. I wasn’t sure if that was commonly “done” but I did find it referenced in a vintage sewing book, so that was good enough for me.

Speaking of bias tape, the neck was the one really strange part of the pattern. It included a bias cut piece for the neck binding, but the piece was way wider than what was pictured in the pattern, even after taking seam allowances into consideration. So I just made my own bias tape and ditched the pattern piece. I ended up having a snafu with the neckline, however, and had to do it three times. It was after the first time that I decided 1″ bias tape would look a lot better than 1/2″, so I made some for the second try. However that time the binding looked like it was going to flop towards the outside and be slightly bunchy. But I did some research and found that you have to slightly stretch the bias tape as you pin it prior to sewing. Once I did that it came together great! I’m really pleased with how the finished neckline looks now and am so glad I persevered and ripped it out twice to get it just right. It’s perfect now. 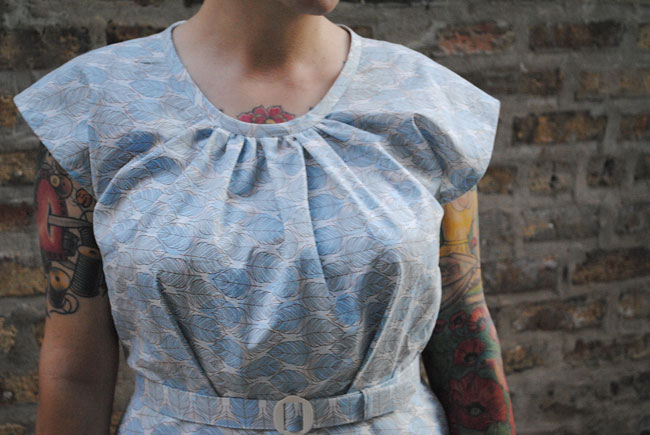 Look, I even made a belt stay for my belt! This would be a good time to admit how much I loathe my tube turner. Ugh! Even if the results are worth it. 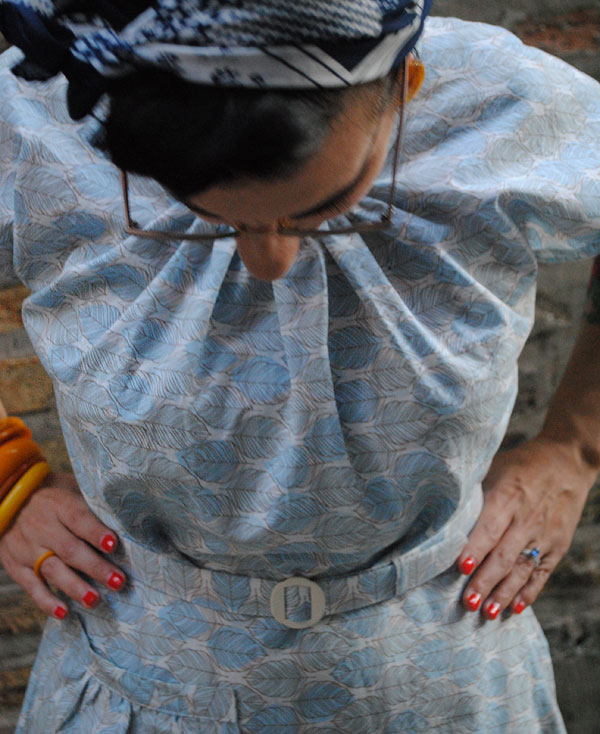 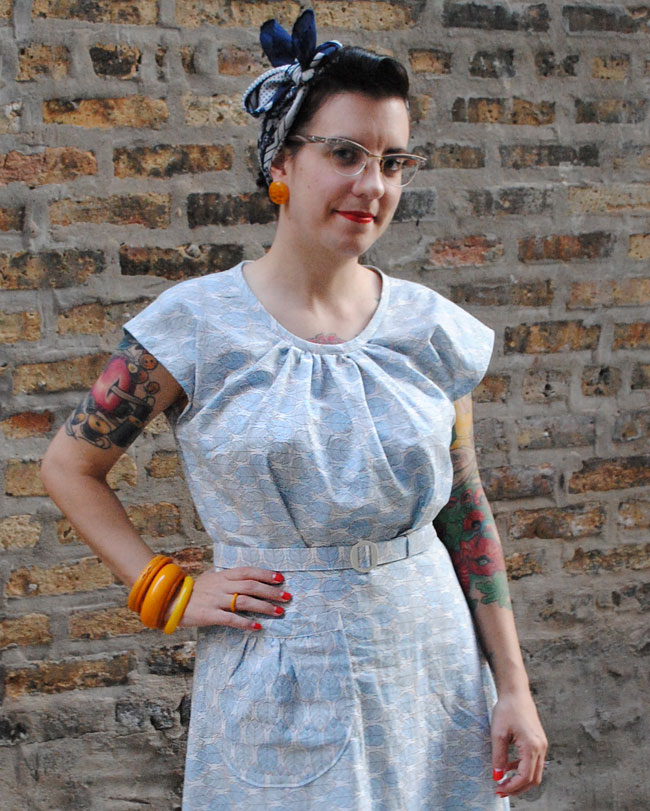 The other main adjustment I made was to use a different skirt than in the pattern. I really prefer more A-line skirts, and thought I’d like this dress a lot better that way than with the full skirt as pictured. As it happens I had the next pattern down from it, 1066, which had just the skirt I was looking for. One piece for the front and one for the back, which is the same as on my all-time favorite vintage dress (which hasn’t made an appearance on my blog yet). 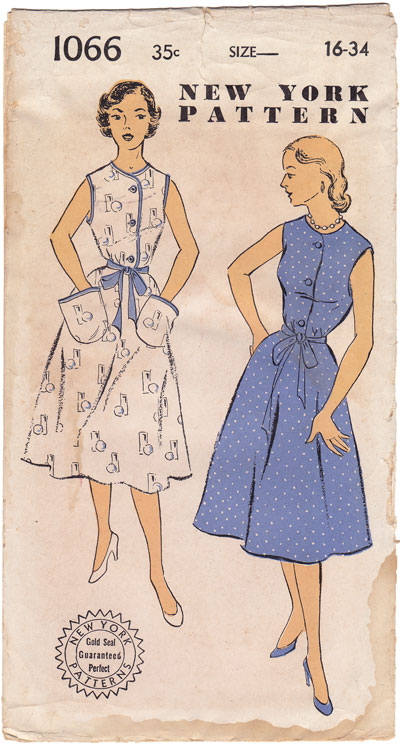 (Whoops, wrinkles…I’d been wearing it a few hours at this point, sorry!) 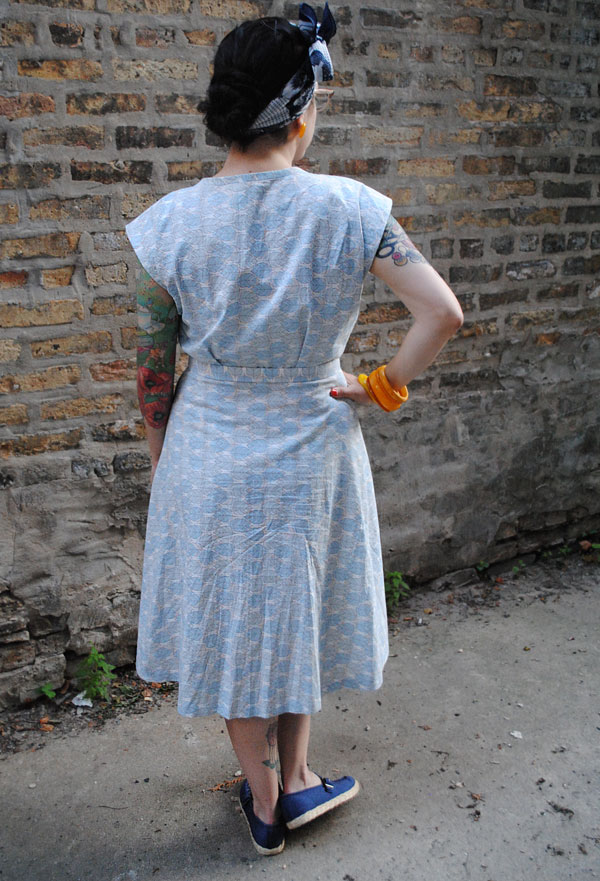 I can’t tell you how much I love this dress! I feel like it worked up pretty much exactly like I hoped when compared to the drawings. The only exception was the bodice was more blousy than pictured, so I just gathered it deeper at the neckline.

It’s so comfy and a great dress for summer, with the roomy open armholes, relaxed bodice and scoop neck. Much as I love collared blouses and dresses, they feel so confining when the temperature starts to rise. This is just perfect. 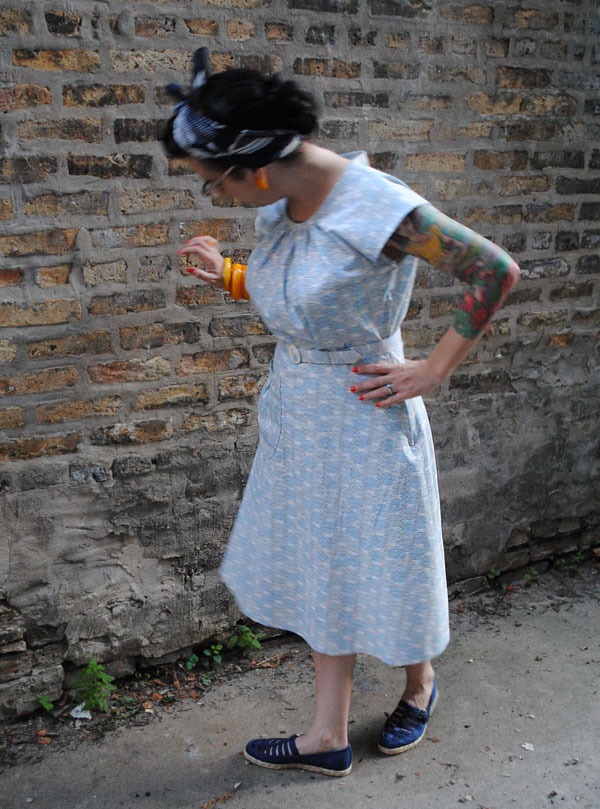 I really could see myself filling my wardrobe with different versions of this dress! Maybe contrasting binding, either a solid color or maybe another print for fun? Two pockets or different shaped pockets, or maybe some embroidery on the pocket or neckline… vintage rayon for a more drapey look… darker prints for Fall with a cardigan… maybe a bow belt… you name it!

Tell me—how would you envision sewing this dress up? Could you see this pattern as a wardrobe staple? 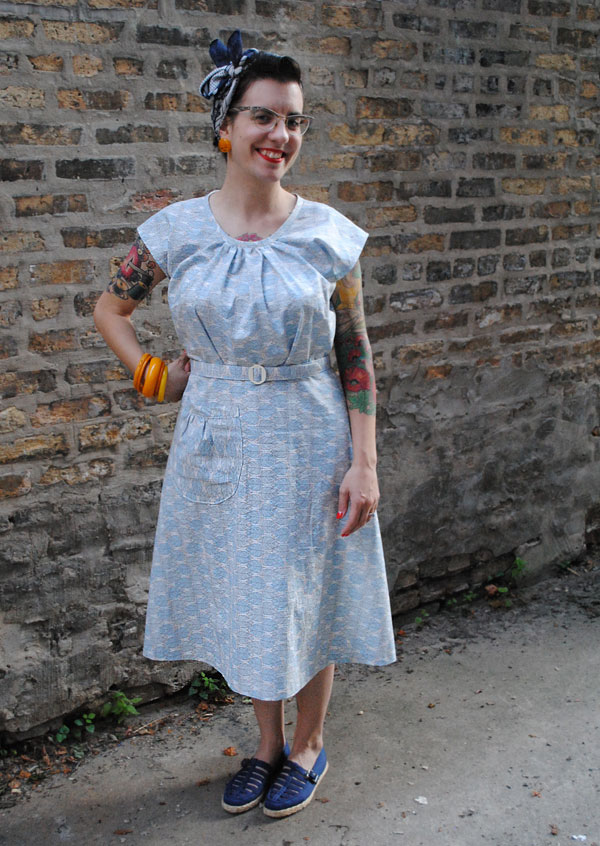 I’m so, so pleased with this dress! And my head is swirling with ideas for other dresses. I have some cotton in navy with tiny white polka dots… maybe it wants to be a sundress, too. Time to consult my patterns!