How is it already almost the weekend? I’ve been confused about the day of the week all week, because of the holiday on Monday. I finally had some time to pull together photos from our camping trip to Wisconsin last weekend.

We woke up bright and early Saturday morning for the drive up to Wisconsin. And by bright and early, I do mean bright and early. We were on the road by 6 a.m. I never used to think I would ever become a morning person, but in the last year or two we’ve found ourselves getting up much earlier than we ever used to. There really is something awesome about being done with your road trip and setting up your campsite by 8:30 a.m.! We were already out on a hike by about 10 o’clock. 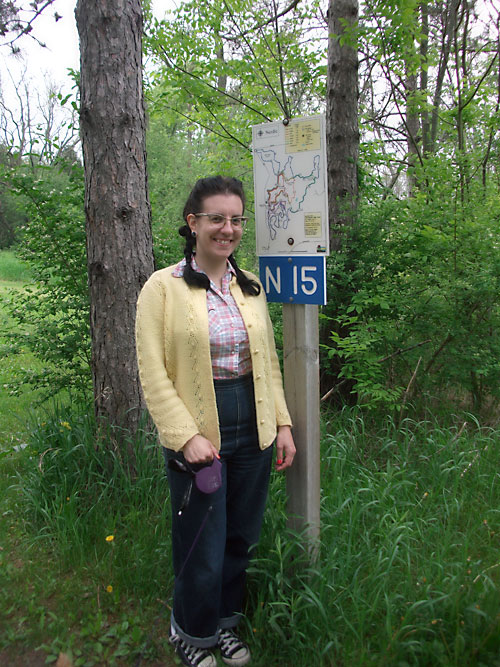 You’ll see in that photo a reoccurring theme in all these pictures, which is my braids doing goofy things. I tried to come up with a relatively easy hairstyle for camping, but because of the way I pulled my bangs back, that hair was significantly shorter than the rest and spent most of the weekend sticking  awkwardly out of my braids. Oh well!

The hike was on a leisurely trail that we really like that goes through forested areas and meadows. This is one of my favorite spots, and interesting little clearing with a bench. 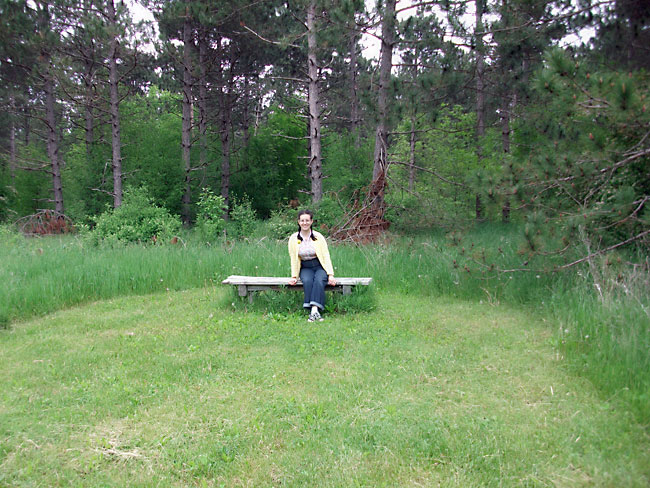 There were lovely wildflowers blooming… 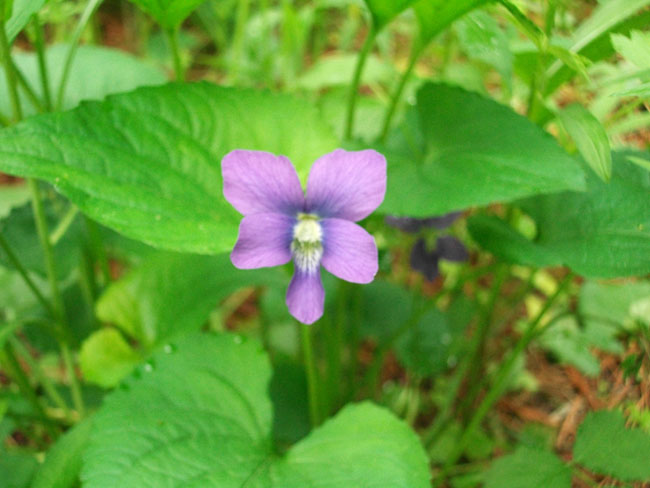 And it was so green! 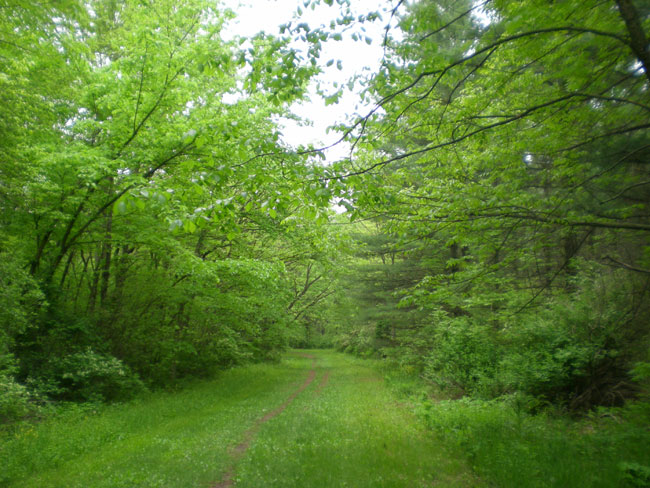 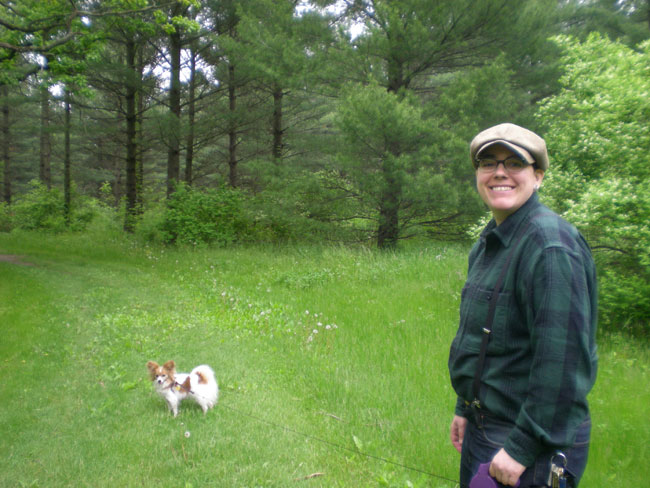 Now we’re the kind of people who almost never let their dog off leash, and certainly not somewhere where you aren’t supposed to. But in one area of the trail, with no one around, we felt safe in letting Pia off leash for a game of fetch for a couple of minutes. 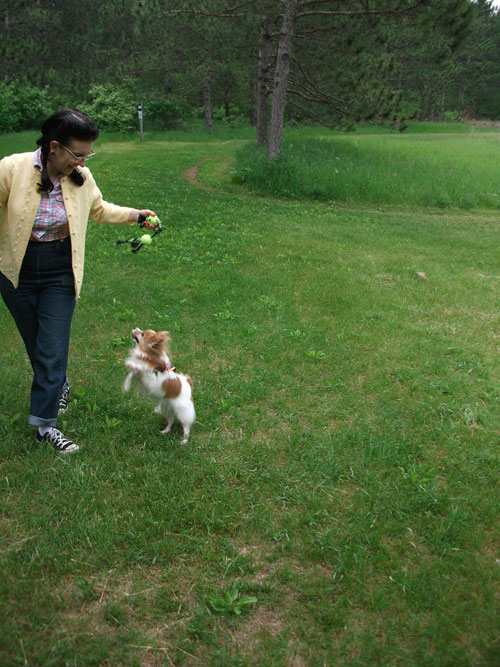 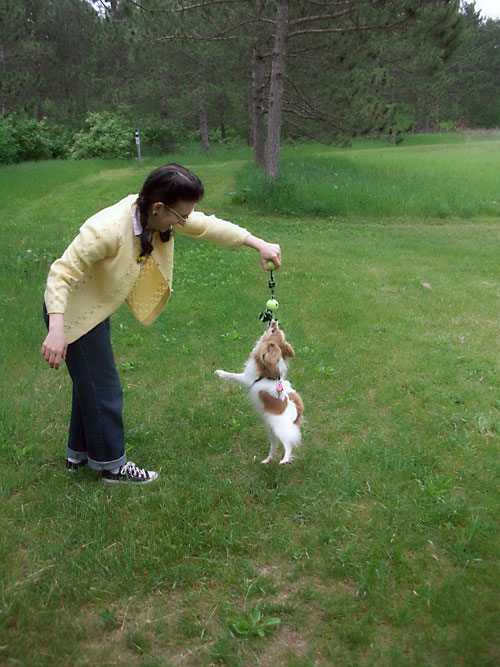 Back on the campsite she was pooped out… 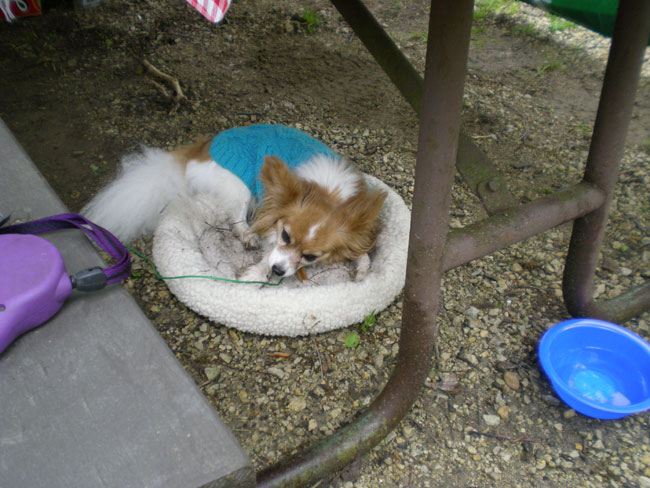 On Sunday we were waiting for our friends to arrive and had to endure a few hours of rain under our rain shelter. Can you see it dripping down the sides? 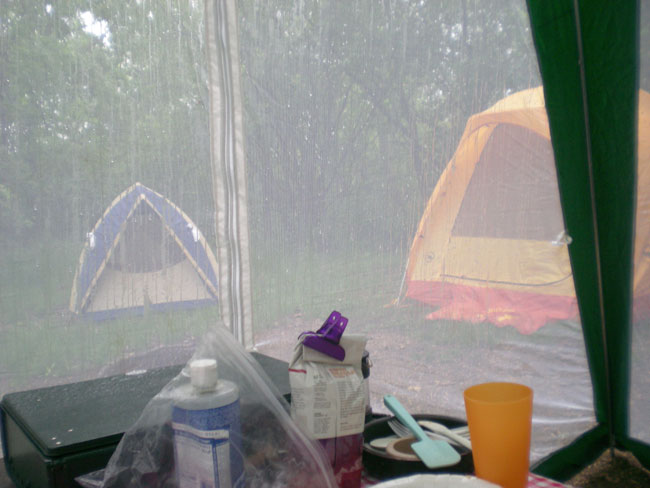 It wasn’t that bad though. I knit and Mel read from The Princess Bride aloud. (We’re trying to finish the book before the wedding—it’s one of my all-time favorite movies.) We even set their tent up ahead of time for them in case it continued to rain the rest of the day. Fortunately it only lasted for a few hours, and it was done by the time they arrived. Though we had to dry out a few things… 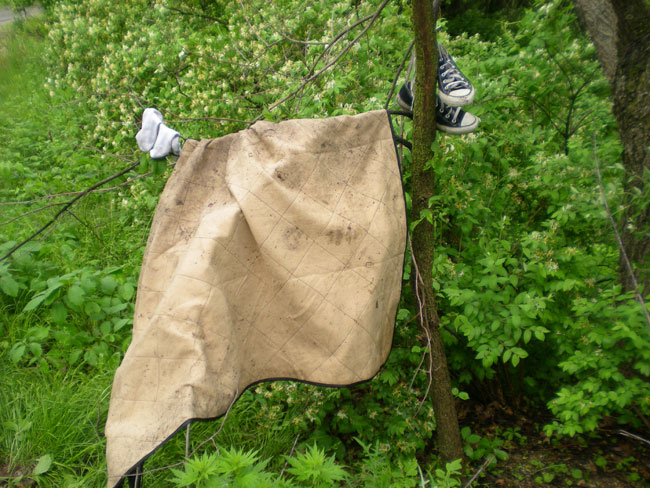 And boy, was I was really glad to have my wellies with me on this trip. I wore them almost the whole time. This was my “vintage camping chic” look, ha ha! 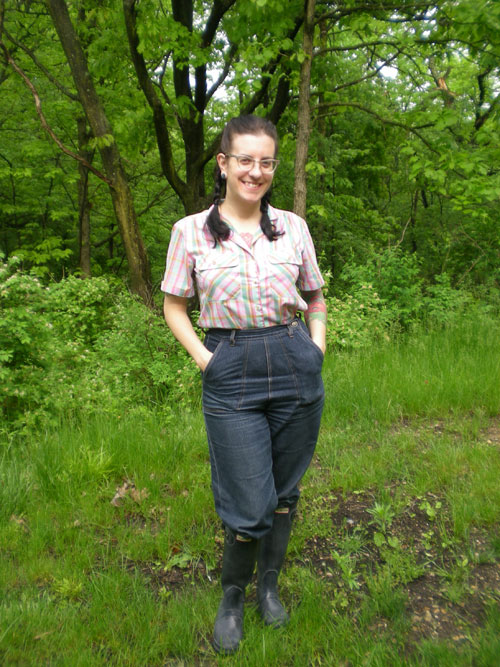 We met our friends in town for lunch that afternoon when they arrived, but once we all got back on the campsite a toast was in order because it was Mel’s birthday! 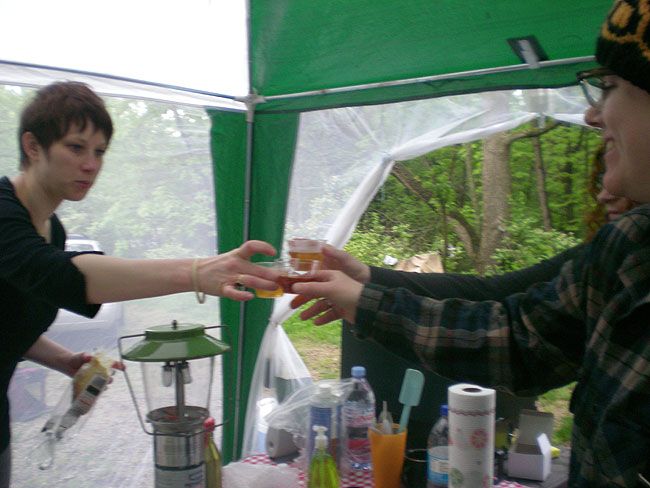 It was shortly after the rain stopped that I started to be annoyed that the sides of the rain shelter made you have to duck under it each time you wanted to get to the picnic table. However every good knitter is armed with a needle and spare yarn, so I whipped up a quick fix. 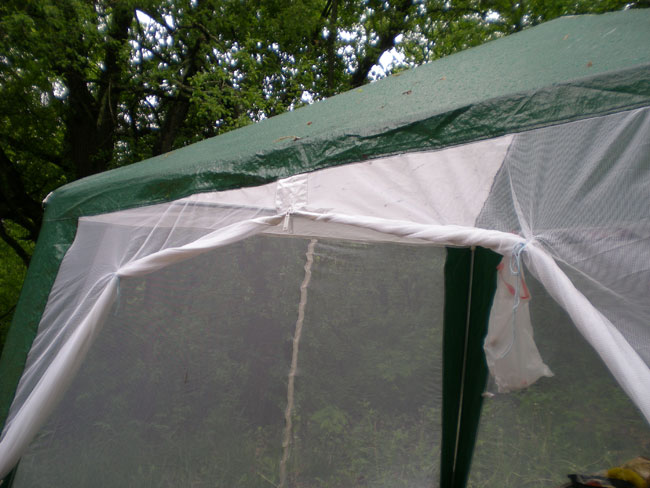 I simply threaded a strand of yarn through the holes in the mesh and tied the sides up higher. Perfect! 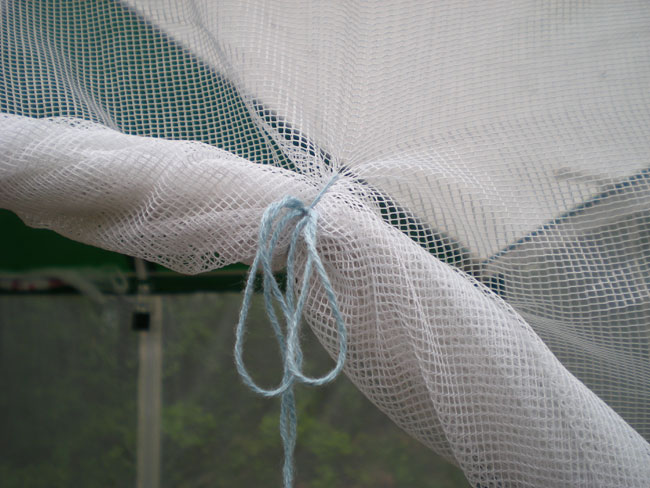 Actually I did a lot of knitting that weekend… 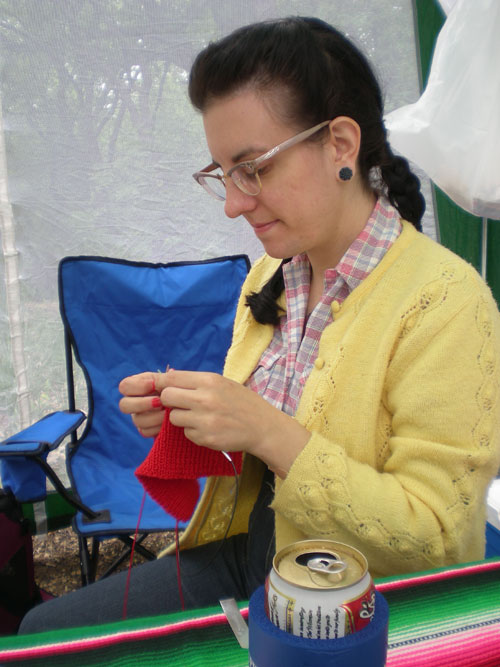 We all had a late dinner by the light of a mantle lantern. We had a variety of things including hot dogs, veggie burgers, potato salad and fresh grilled asparagus. 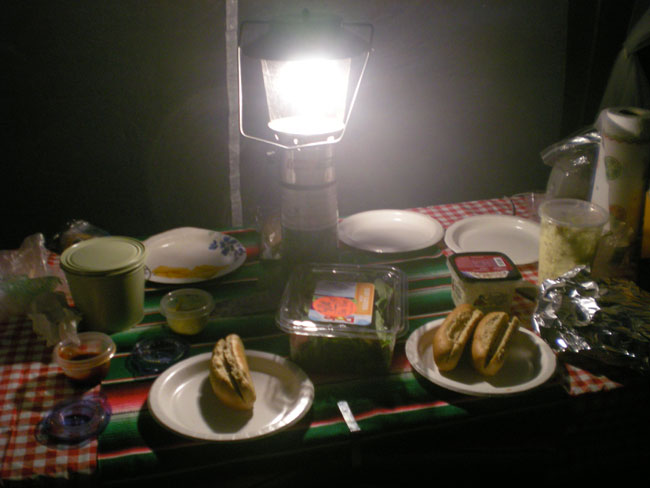 And last but not least, here’s Mel starting a camp fire. Of course there were s’mores later that night over the fire! With yummy Cadbury Dairy Milk that Emma brought back home from Wales for the chocolate, which of course is far superior to our American standard of using a Hershey bar. 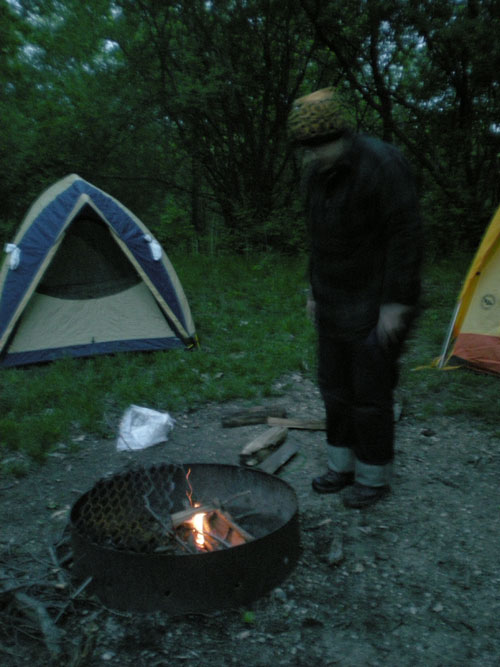 Overall it was a great camping trip, and we’re really glad to have another one planned at the beginning of July!