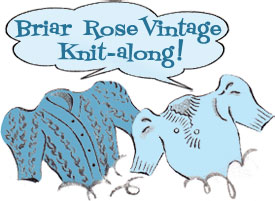 I’ve been following our Flickr group discussions carefully, and there are 3 topics I thought would be important for me to touch on here for everyone to read.

I may have touched on this elsewhere, but I wanted to mention it here too. In the pattern as written, it tells you to start off the armhole decreases as follows:

k2tog each end of the next 4 rows

Either this is an editing mistake, or they assumed that you would understand that on the purl rows, you would actually p2tog. Either way, the general rule is work knit-oriented decreases on knit rows, and purl-oriented ones on purl rows.

Now this is an area that I’m usually fairly anal-retentive about, as you’ll know from when I touched on mirrored increases earlier in the KAL. But I didn’t talk about decreases. Here’s how I work them when I have to do decreases on both sides of a piece, like for the armholes on the back of a sweater.

When I need to work decreases on the purl side as well, I want those decreases to be facing the same way as the decreases on the knit row, right? On the edge where I worked a k2tog, I work a p2tog. From the right side (RS) of the piece, they will look exactly the same. Then on the edge where I worked a SSK, I work a p2tog tbl (purl 2 together through the back loop, which is shown here). How do I keep track? Well I just remember those plain k2tog and p2tog stack up on the same side, and remember the “weird” ones are on the other side. Not very scientific. 😉 But if you’re ever in doubt, just turn your work to the RS and take a look and see if the decreases are slanting in the same direction.

I wasn’t initially planning to cover much about the pocket because it’s fairly straightforward. However, Ingrid and Liz discovered that the pocket, worked to the size according to the pattern, comes out a bit bigger than pictured in the pattern. My mistake for making an assumption when I hadn’t yet knit the pocket myself! 🙂

The pattern as written:

[From the “Make Up” section]
Sew on collar and pocket, working 1 row of D.C. around pocket.

Here’s the first thing to clarify that I didn’t notice was in the pattern until the Flickr discussion: double crochet in Australia and the UK is single crochet in the United States (here is a comparison chart). So when you work a crochet border on your pocket, work it in single crochet (video here), those of you in the U.S.! While the pattern doesn’t specify, you’re going to want to work in a crochet hook as close to the same size diameter as the needle size you used to knit the pocket. If you used 3mm needles to knit the pocket, try and use a crochet hook close to 3mm as you can. In the U.S. there’s no 3mm hook, so you’d want to go the next size up, which would be D, or work with a smaller hook but work pretty loosely to make up the difference.

Don’t have any crochet hooks close to the size of your knitting needle, don’t feel like getting one or don’t know how to crochet (though it’s a very useful craft to learn)? That’s okay, too. There’s no rule that says you must crochet a border on the pocket! You can go ahead and sew the pocket on as-is if you’d like.

Now here’s the second thing to clarify about the pocket: if you work it in the same size needle as the body, and work to 3″ along the side edge, you may discover it seems a little big. There are several ways to fix this.

You can try going down a needle size (I tend to for garter stitch, anyway, and did so for my collar) to make it a bit smaller overall.

You can also cast on less stitches, making sure the final number of stitches is still an odd number like the original pattern. So instead of casting on 27 and working every other row like this:

You could instead do something like cast on 23 sts (not 27), and work every other row like this:

It changes the pattern very little, but it will keep the same dimension, just cutting a few stitches from each side.

And that brings us to the last thing to clarify about the pocket: K twice into the first st is just a form of increasing one stitch, like knitting into the front and back of a stitch (KFB). You can choose whatever type of increase you’d prefer. If you plan on omitting the crochet border, I would recommend making sure your increase is at least 1, if not 2, stitches in from the edge, because it will make it a bit easier to seam. This is usually how increases are done on something that’s going to be seamed, like the side seam increases/decreases of a sweater or armhole decreases when you set in a sleeve.

Barbara brought this to my attention in the Flickr group. The pattern as written tells you to separate the front into two halves to create the button placket up the center front when your armhole shaping is complete. I didn’t actually think of this during my own knitting as I had planned the length of my own button placket from the top down.

That’s after 16 rows, according to the pattern. At the pattern’s row gauge of 8.5 rows per inch, that’s only 1.88″ up from the armhole BO row. That’s kind of low, if you ask me, when you consider the fact that you start the neckline BO at 5.5″. That button placket doesn’t exactly look 3.62″ long, nor does it look like it starts at the end of the armhole decreases, does it?

I would recommend working maybe another inch after your armhole shaping. I worked until 2.75″ from the initial armhole BO row, then I split for the two halves of the front. (Note: I worked to an armhole depth of 7.5″.) See how what I did more closely mimics the original pattern than what it tells you to do?

How did I arrive on 2.75″? I had already decided that I would start the neckline BO at 5.75″, and I wanted my button placket to be 3″ long. In hindsight, I probably would have lowered the neckline another .5″ or so, as mine is a little tighter than I wanted it, but I can likely block that out.

Hope these tips help you. This has been one of the really fun parts of this knit-along, getting to learn from each other’s knitting experiences!