Boy, am I glad I decided to do a muslin! In yesterday’s post I was all excited to try and turn Anne Adams 4855 into a blouse. Not working out well, so far.

I re-drafted my pieces, cut out my muslin and started in on the sewing. Putting together the sleeve was a bit awkward, as you sew the shoulder seam first, then turn back the seam allowance on the front and back bodice pieces, then topstitch over the sleeve. 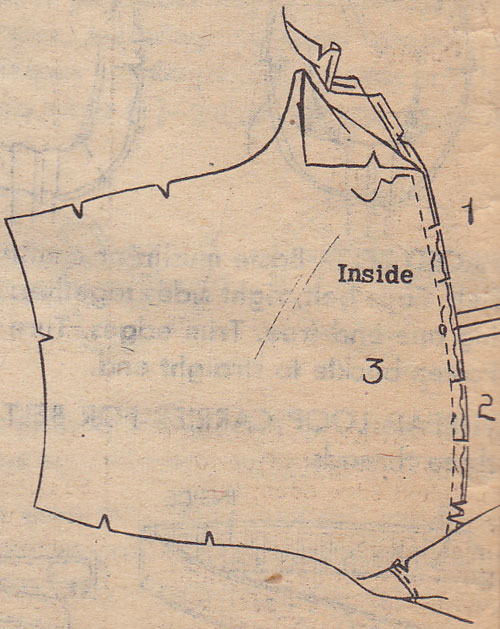 Then you sew the side seam. In my case since this wasn’t going to be a dress, I just sewed the seam completely down the side instead of leaving part open for a fastener. Easy. But when I tried it on, it was a big fail.

First, I think this was meant for someone with much broader shoulders, so I could easily trim the width at the shoulder by an inch or two. But more importantly, the sleeve is just all kinds of funky. I have no clue how the sleeve in the drawing can be so crisp and perky, because that is quite the opposite of what I got. It was floppy and acted weird under my arm and bunched in all the wrong places (as if there’s a right place to bunch). I started to think it was the muslin, which is pretty thin, and realized this type of a sleeve was probably better suited for a stiffer fabric, so I had a feeling I was going to end up abandoning this pattern for this particular fabric. But I wanted to take a closer look, anyway.

I laid the bodice down on the table and started comparing it to the pictures in the pattern. I noticed something weird going on.

Here’s the curve of the sleeve. Notice how the short sleeve comes out from the side seam and then makes a right angle. Follow the little blue dots. 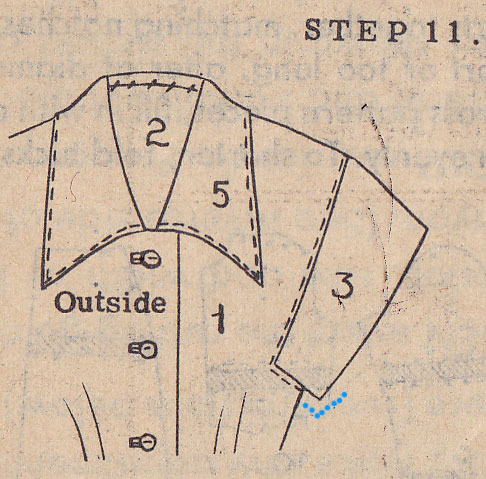 Now look at my sleeve. (Don’t mind my slapdash topstitching… it’s a muslin, after all.) 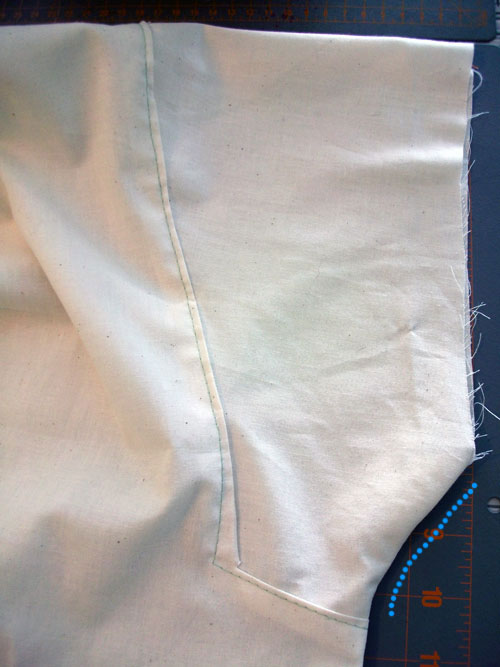 Which matches how it shows you sew the sleeve in a different diagram. 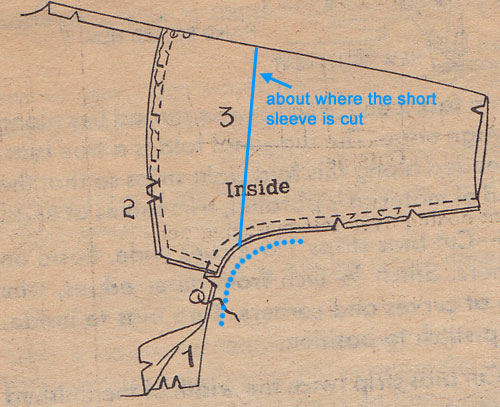 No right angle. Even though the sleeve looks perfectly innocent, like it might actually replicate the nice sleeve in the drawing, it does not.

I confirmed that I didn’t do anything wrong in my sewing. So unless I am completely crazy, that right angle is not happening. It’s just not how the pieces are shaped. And what that means is that in order to actually hem the edge of the sleeve, I’d have to do some serious trickery, because that angle does not allow you to evenly turn back a hem. I even opened up the side seam where it meets the edge of the sleeve, pinned it all back to take a look at it on me, and it didn’t help much. Not to mention the fact that with my hand on my hip, I could indeed easily see straight through the sleeve to my bra. I can’t really see a reason to alter the armhole to make it less deep so that doesn’t happen, as the sleeve still looks crappy for other reasons that the depth of the armhole wouldn’t fix.

I’m sure there’s a way to turn this around, but I’m not sure what that way is. Right now I’m annoyed and no closer to a nice white blouse.