Last night we decided to brave the labyrinth of snow walls that now make up our city to go out. Did you know some people here “save” parking spaces once they uncover their car from the snow? Really, it’s a pretty hot issue! Fortunately we don’t have to worry about it since we don’t have a car parked outside. The guy in the car in the right of this photo saw me taking the picture and joked that we should go sit down in the chairs, but agreed it was a little cold for that… 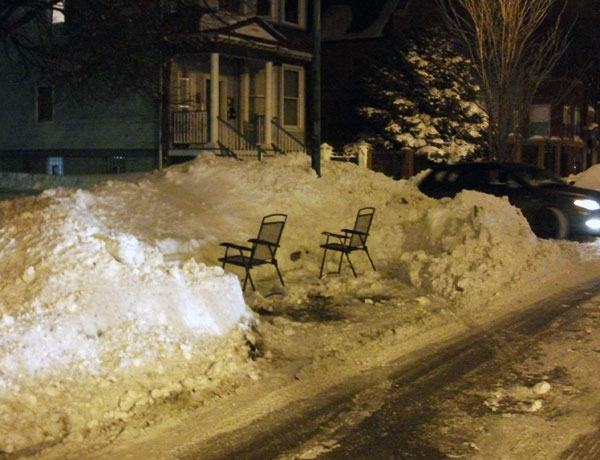 I was trying for some good outfits photos before we left, but failed rather miserably. This was the best one of the lot and didn’t even show my accessories, an ivory beaded cardigan and matching purse. 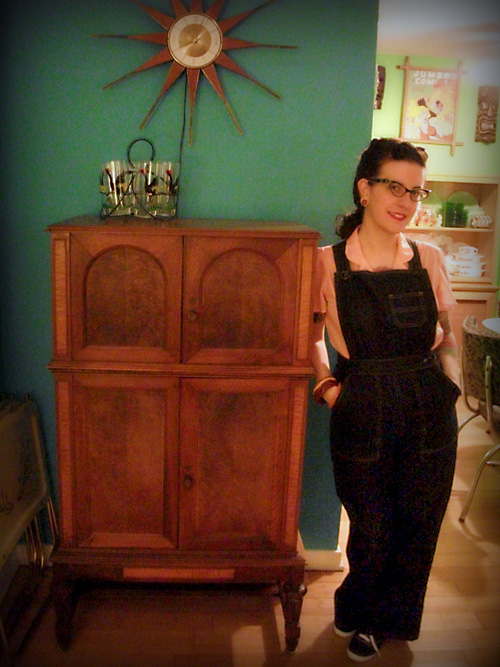 At least I was able to get a little bracelet bling… 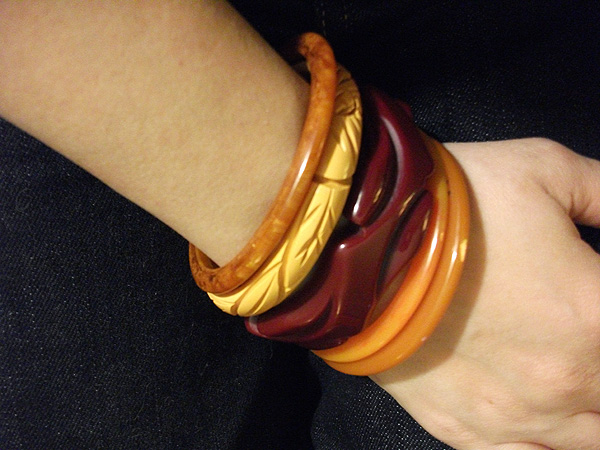 Some Bakelite and a chunky maroon vintage bracelet of unknown plastic that I bought at an antique mall in the middle of nowhere in central Illinois. When the woman took it out of the cabinet she said, “It’s not Bakelite” in a way that clearly meant “40 people before you have asked this question, so don’t bother asking”. I loved it anyway and it was reasonably priced, so I told her I’d buy it to save her the trouble of ever having to say that again. 😉 Besides, it looks great mixed in with my other bangles!

When I was haphazardly playing with my hair I did some small victory rolls, which I didn’t think would work since I’ve had a hard time with them the longer my hair has gotten, but it turned out pretty good. Knowing I’d never get them to work again (because my hair is just ornery like that), I pinned them and called it a day, and did a little curl with my bangs. I knew it would be dark and no one would notice my hair was a little frizzy. Later I discovered I had bean dip splashed on the bottom of my overalls from a recent party at our friends’ house when Elaine accidentally dropped a fresh-from-the-oven bowl of bean dip and it broke all over their kitchen floor.

Yes, let’s recap that. I went out to a show with bean dip on my pants and frizzy hair. How uncouth can you get! 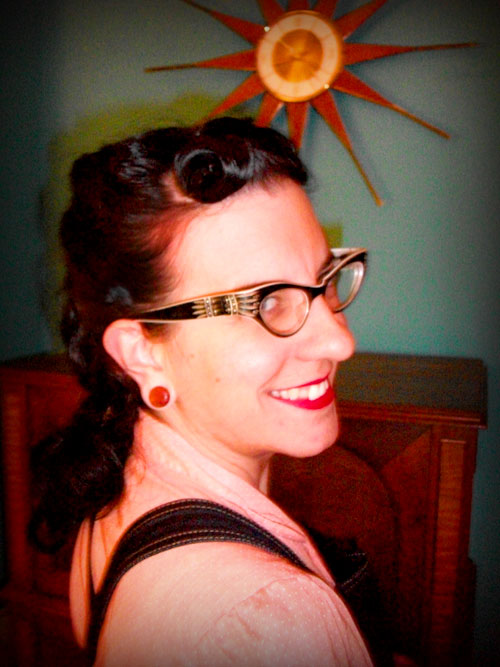 I wore my ubiquitous Freddie’s of Pinewoods overalls and navy Keds. I love those overalls so much. That’s also the only photo that shows the cute little dot print on my shirt. It’s a sheer light peach vintage Ship n’ Shore blouse with rows of tiny little white polka dots and flirty, bias cut sleeves. I seriously wish I had one in every color. In fact, I bought a much larger printed polka dot white cotton voile so that I could attempt to sew something similar. (When I ever finish my birdie blouse.)

Unfortunately, the show itself was kind of a bust. It’s a monthly rockabilly jam with several bands. It doesn’t start until pretty late for a weeknight for old timers like us, so we usually only stay about an hour and get to see the first couple of bands. It started later than normal, probably due to the weather and it still being relatively difficult to get around the city, and then the opening band played blues. Now I have some seriously eclectic taste in music, but blues isn’t high up on the list of things I like. And since it all started late, they were the only band we got to see. Oh well. You win some, you lose some. At least it was fun venturing out in the snow! 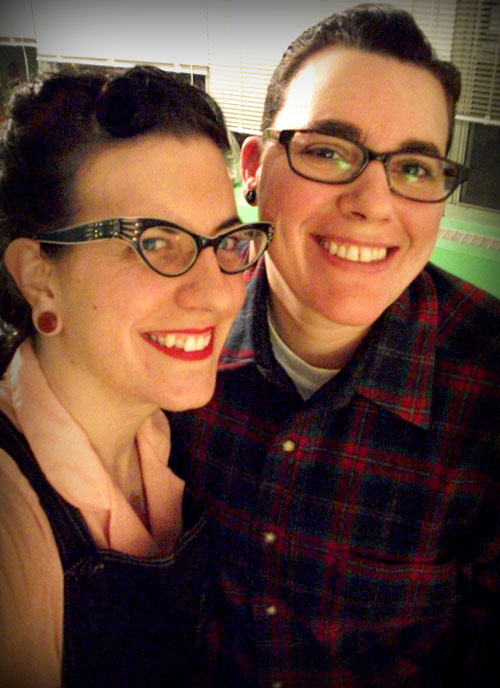 When we got home I did something that I never do: I took a photo of myself after taking off my makeup and undoing my hair. And I’m posting it. Can you believe it? Would you dare do the same? I must have lost my mind. No makeup, no glasses, just took my hair down and about to pop into bed after I change clothes (you can see in the background Pia beat us to bed). Stray hairs, tired eyes, zits and all. My ears were still red from the cold. I actually took this photo to show myself how I did my bangs, since it was something new I tried and I wasn’t sure I could repeat it in the future. I thought they looked better after I took my hair down than when we went out! 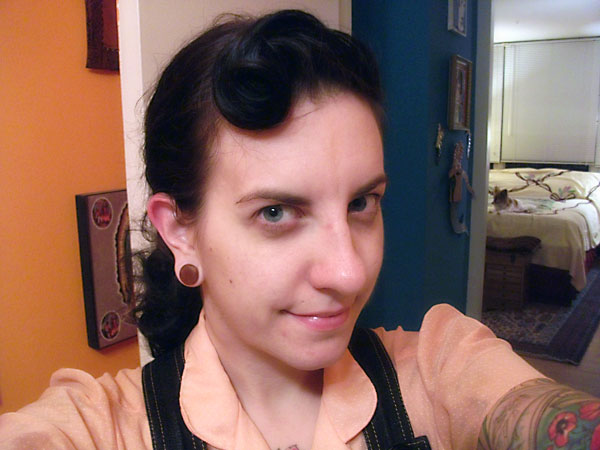 And now that I’ve bared my soul (okay, really just my skin), I wish you all a good weekend. Anyone have any fun plans?