I guess you could say it’s been awhile since I’ve felt like blogging. Nothing happened, I just kept putting off posting photos from our Fall trip to Ireland and I turned around and bim, bam, boom! Suddenly it’s 2011. Happy New Year!

While the holiday season has only just finished up, I feel I can still be justified in posting the Christmas sweater I knit in December. Last year (oops, now the year before last– look how that pesky new year confuses you) I ordered the lovely little knitting book Vintage Gifts to Knit by Susan Crawford. You might recognize the name as one of the authors of A Stitch in Time, Volume 1 (and incidentally, Volume 2 is now available to pre-order). I naturally fell in love with most things in the book, and really wanted to knit her Perfect Christmas Jumper pattern in particular.

All things considered, I made very few changes other than the dramatic change in gauge. I tried to keep my charts and pattern as faithful to the original as possible. The sleeve caps have a box pleat. Because I felt the similar type of cap on my Mildred Pierce cardigan featured in my last blog post came off my shoulders a bit too much, I made sure to decrease the shoulders in this pullover so that the cap would sit closer to my shoulder, and that worked out brilliantly. The cap is really ingenious– you work decreases that (mostly) mirror the armhole decreases on your body once you hit the desired sleeve length, work to a couple of inches short of the height of your armhole on the body, then decrease until you have about 2″ of stitches remaining in the middle, then knit a little flap for about 2 more inches. Then you seam the sides of the flap to the cast off edges just before the flap. Don’t let my simple explanation fool you though, because I literally spent hours deconstructing the sizing on Susan’s original pattern in order to reach that conclusion. I love the result and I’ll definitely use it on future projects. 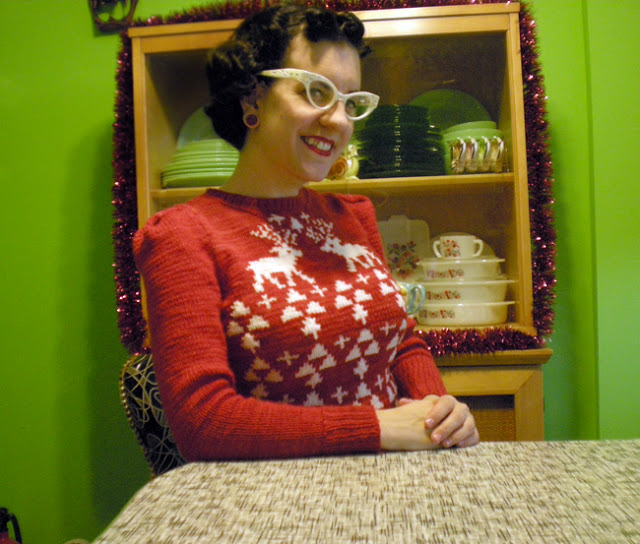 The other thing I love about this pullover is the back. There’s a little button band at the top, which is a cute added touch. I used 4 round vintage buttons from my stash. 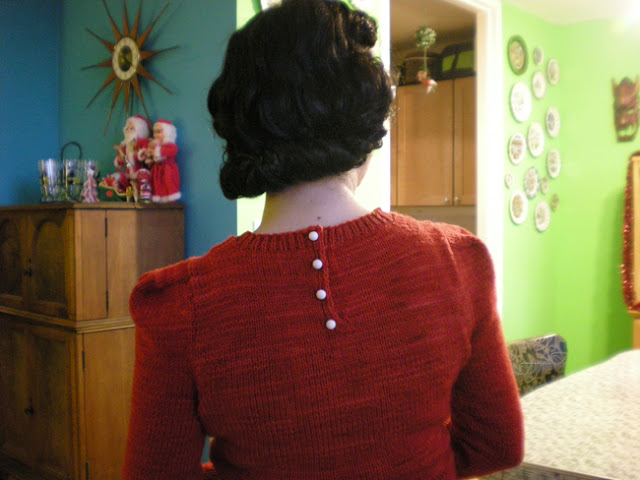 In this photo you can see that my short style is an illusion; my hair has grown quite long and I have it tucked up and pinned. It’s actually several inches longer than I’ve had it in any kind of recent memory. I’m probably going to get it cut soon, to perhaps a modified long middy that’s a few inches shorter than what I have now and layered so I can try out more vintage styles. But the length has been fun, and I proved to myself that yes, I can grow my hair long!

And just to get me back on the topic of knitting, my current sweater is coming along. Rather slowly, admittedly, as it is indeed in fingering weight–the short-sleeved Fair Isle Yoke from A Stitch in Time. Except, because I appear to be incapable of knitting something exactly as written, I’m slightly modifying the fit and I’ll be using a completely different colorwork chart featuring hearts and clovers. I’m hoping to finish up a couple of short-sleeved sweaters for Viva Las Vegas in April, but knowing how I love to jump to other projects (and that I have some sewing I’d like to do between now and then, too), I’ll be happy if I get Fair Isle Yoke completed by then.