How nice to see you again. Yes that’s right, I’ve started up a new blog. I tired of redhotknitter.com about a year ago for no particular reason, so I wanted to give it a go with a new start that focuses on all of my interests, not just knitting (though there will be plenty of knitting, too!).

So let’s have at it.

Say… what’s that up in my header? A vintage sewing pattern, that’s what. 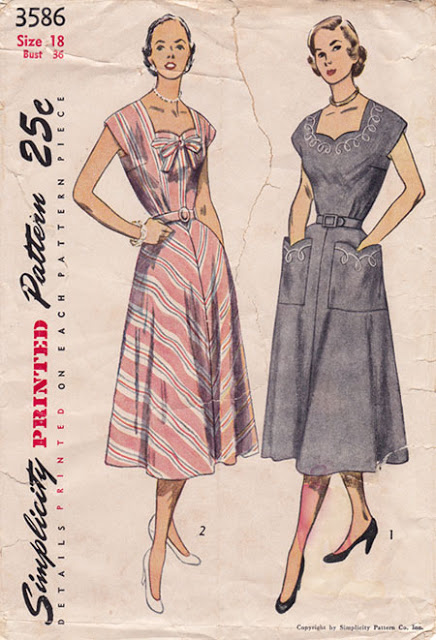 Don’t you just love vintage sewing patterns? For the most part they’re really not much different than modern sewing patterns in terms of usability, but what a feast for the eyes. And of course, I love holding a piece of history in my hands. I particularly love if the pattern has little notes or scribbles, faded pen or tailor’s chalk or other signs that someone actually made something from the pattern at some point. I think that’s just the best.

I love the dresses shown in this Simplicity pattern from the 1950s. I admit, I love dresses in theory way more than I love to actually wear them (jeans/overalls/trousers/capris are much more my speed), but that doesn’t stop me from collecting vintage dress patterns. I’m thinking someday I’ll make a blouse from the top half of the pattern, instead.

I’m actually working on a blouse from Simplicity 3963 right now. 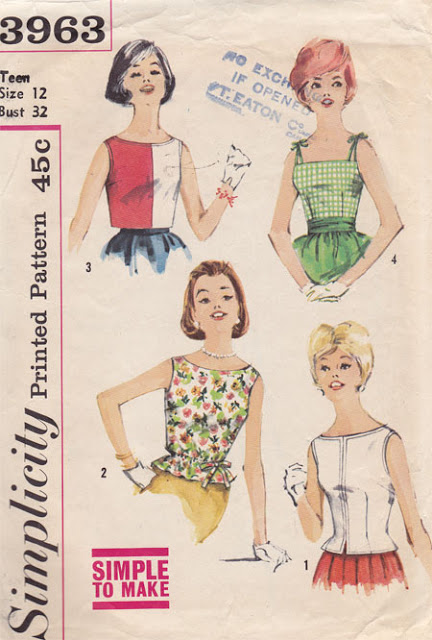 Now, the pattern is a little small but even someone with modest sewing skills such as myself can handle a little bit of alteration on something as relatively basic as this top. I’m lengthening it by 2″ and making it a little bigger. Everything has gone smoothly so far and I hope to be sharing the finished blouse once I get the zipper in. Granted, this is the first year I’ve done much sewing in eons and I can’t even recall the last zipper I installed.

Hopefully there won’t be too much swearing involved.  (I make no promises. Dainty is not my middle name. Ask my mom.)