I’ve been really busy this spring and early summer, and blogging just hasn’t been on the forefront of my mind lately. I go through periods when I just find the entire process of taking and collating photos complete and utter drudgery. Sure, taking half a dozen photos doesn’t seem that annoying, but it usually takes 50 or more to even find just a few I’m happy enough with to post. Thankfully for you, I finally got everything together to write up a blog post about a dress I sewed over a month ago!

This is actually the second version of a dress I first sewed for the Mood Sewing Network, in a gorgeous plaid silk dupioni. I made that fancy version first (although with pre-washing the silk, it downgrades it to fancy-or-casual as it can now be machine washed!) and then I went for a sweet little casual gingham cotton version. The pattern is Advance 7131, a 1950s pattern that I picked up at an antique mall last summer in northern Wisconsin. 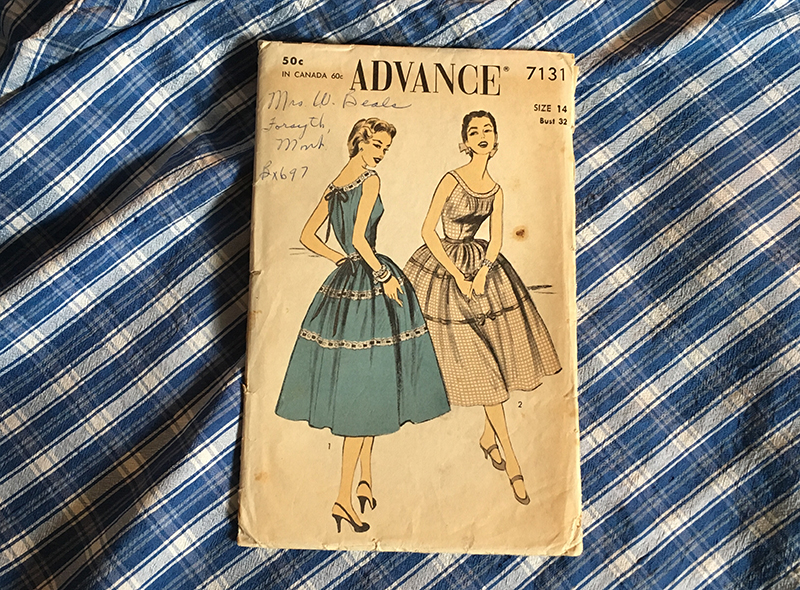 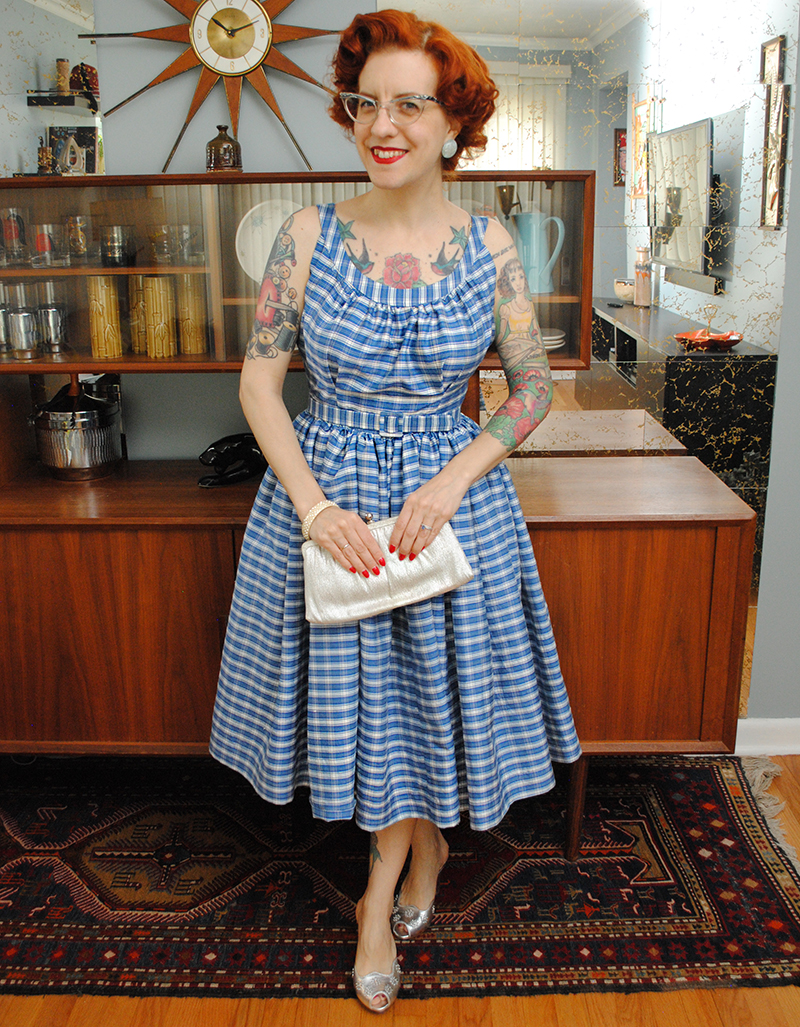 And here’s my gingham cotton version! 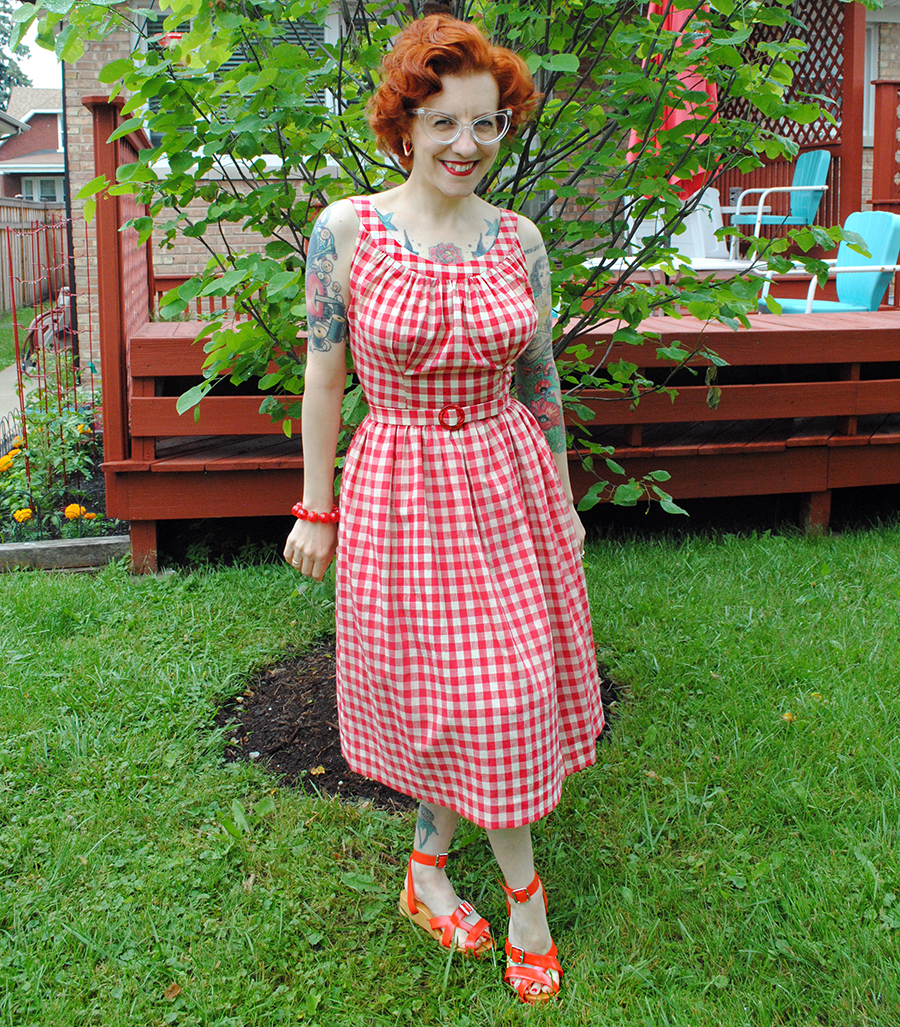 I love how they’re similar, but really entirely different dresses. In fact, the gingham version used half the yardage that the plaid version did, so the skirt is much less full as a result. It was a lovely cream and red vintage fabric that I got from Mena of Shop Make This Look, and I only had juuust enough to squeeze out this dress. In fact I had to face the neck bands with red cotton since I didn’t have enough.

Speaking of, the neckline was a new one for me to try, and I like it a lot. (I mean obviously, I sewed two in a row.) 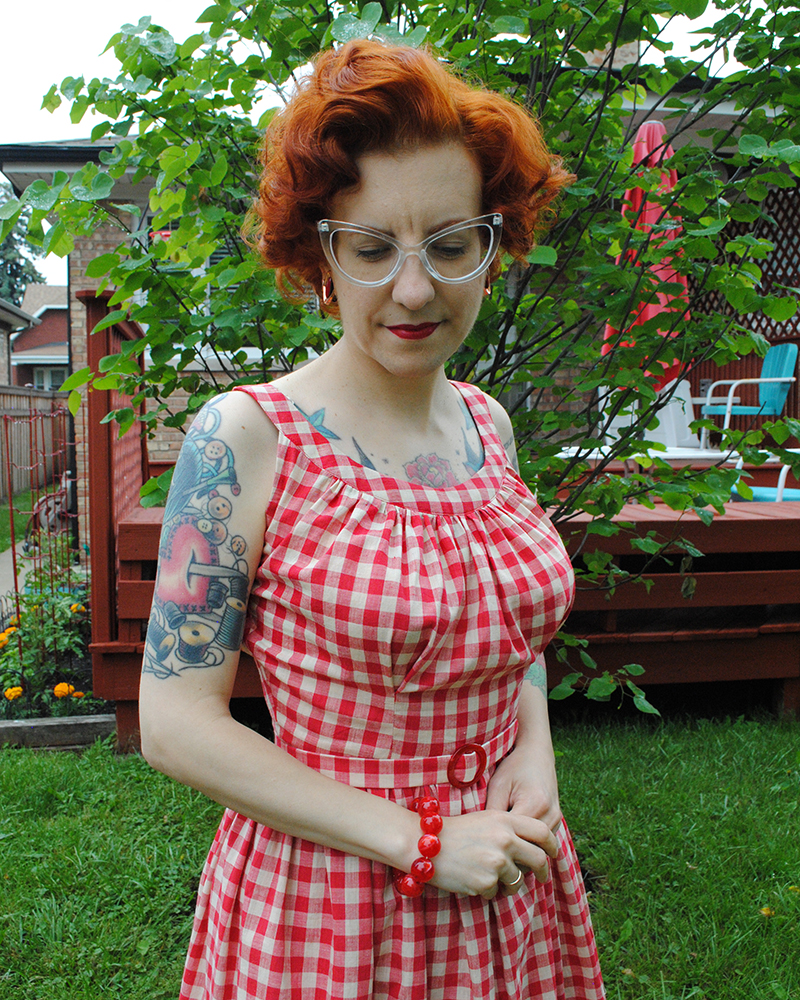 It’s overall an interesting shape with the gathered bodice and dart tucks that shape it. And kind of neat that the neckline forms the straps too. Which is a nice touch sewing-wise, as it means you can apply bias tape to the armhole with them open at the top which just makes the whole thing a bit easier in my opinion! 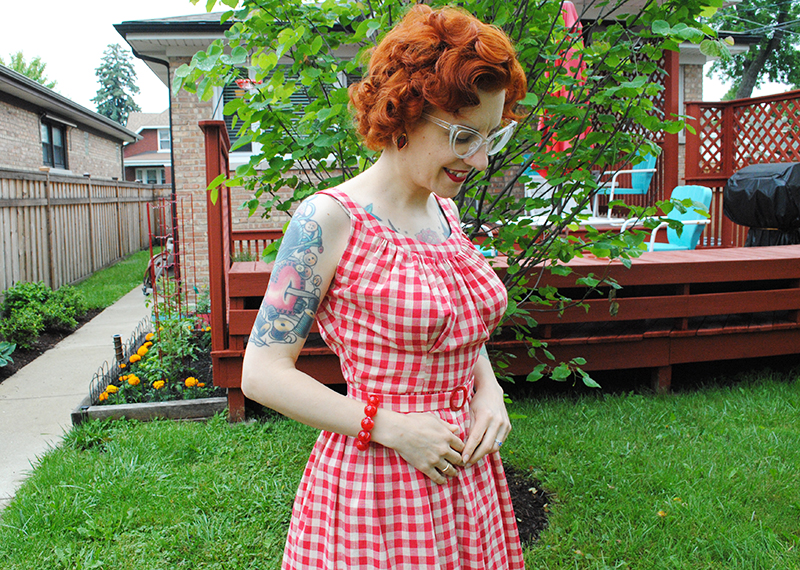 The back is a bit blousy by nature of the gathers, as you can see. You can also see that I matched up both the gingham across the back bodices at the center back zipper as well as the center back of the neckband. That was no small feat! 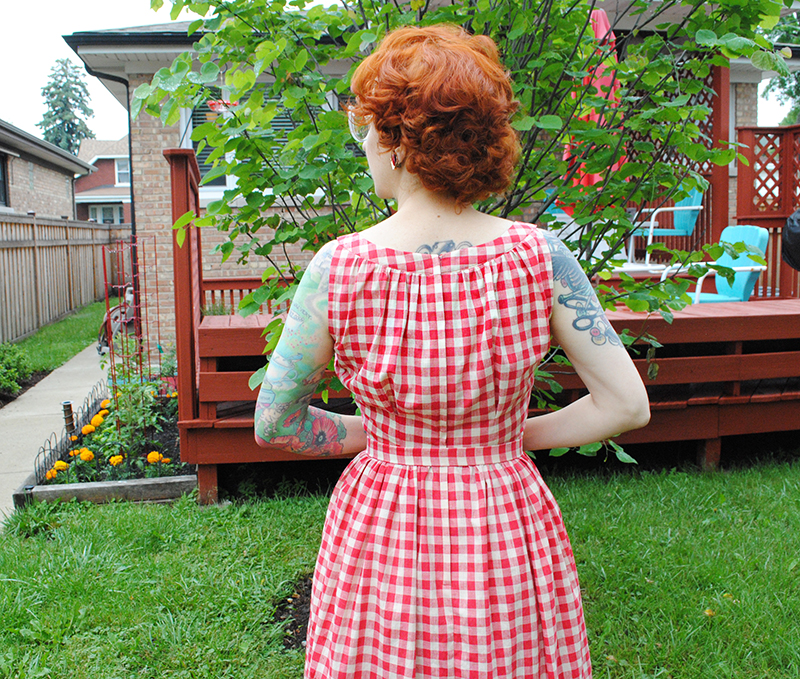 I also made a matching belt, something I nearly never used to do and suddenly started doing again last fall. I used a vintage lucite buckle. I’ve made so many dresses with buckles in the last year, I’m running out of stashed belt buckles! 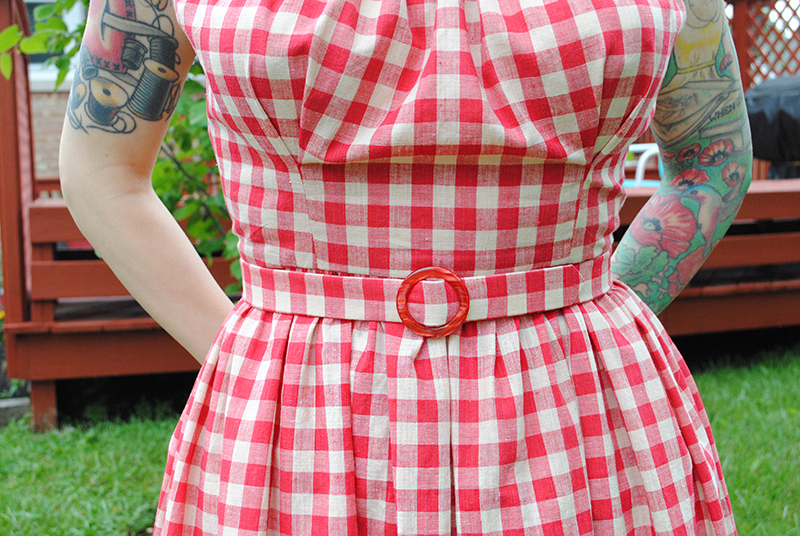 The fit isn’t 100% the way I’d like it (and nothing you can really see, but I can feel it when I’m wearing it and moving around). Sometimes that’s the beauty of repeating something soon after making it the first time: when I did the plaid one, I had to take the side seams quite a bit, so I transferred those changes to the pattern and was able to incorporate that into this gingham version. However, the plaid bodice was a bit short (I’d initially shortened it more than I needed to apparently), so I lengthened it and now it’s a bit long. I need to still find the middle ground next time. 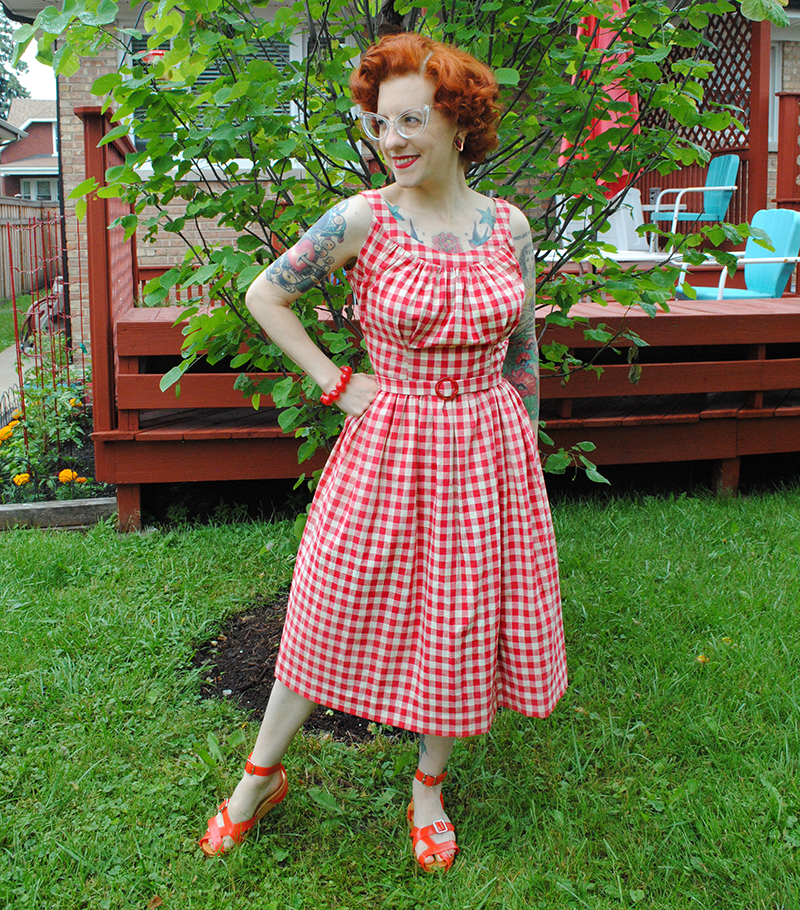 I’ve wanted a red gingham dress for a long time, and I’m so glad I finally made one! 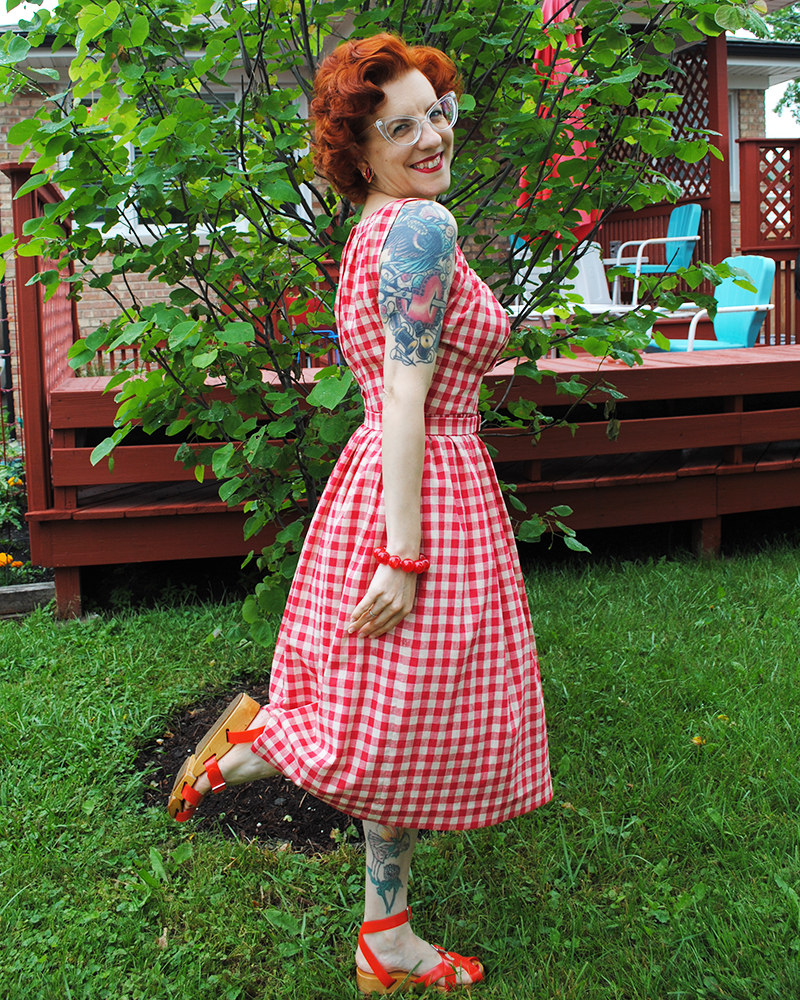