Do you ever just drop everything you’re working on to sew a quickie project? I almost never do. But I did recently, and can understand why people do it sometimes!

In the middle of my latest jeans project I suddenly had the urge to try out a pattern I’ve been thinking about non-stop since finishing my Carbeth pullover. The cropped shirt in Butterick 7557, from around 1956. 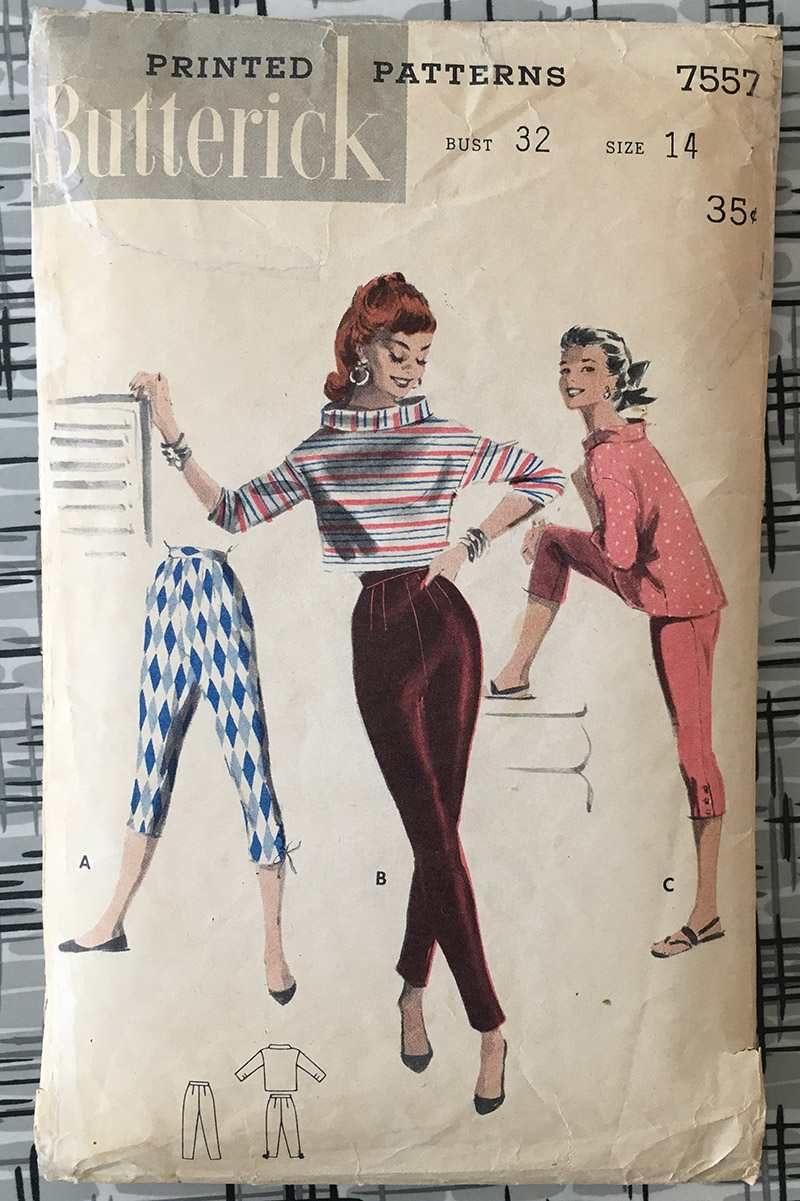 Meant to be more of a sweater, or a shirt? One can never quite tell when the pattern doesn’t specify fabric recommendations which it didn’t. But my mind first went to French terry sweatshirt version. Probably because I really needed a sweatshirt. I sewed a Linden sweatshirt once but it never clicked for me, and donated it awhile ago. I have a couple of RTW ones that are old and not ratty or anything, but I just wanted something cuter and more vintage inspired, if possible. And then after falling in love with the cropped silhouette of Carbeth, I knew it was time to try it out. I’m so glad I did! 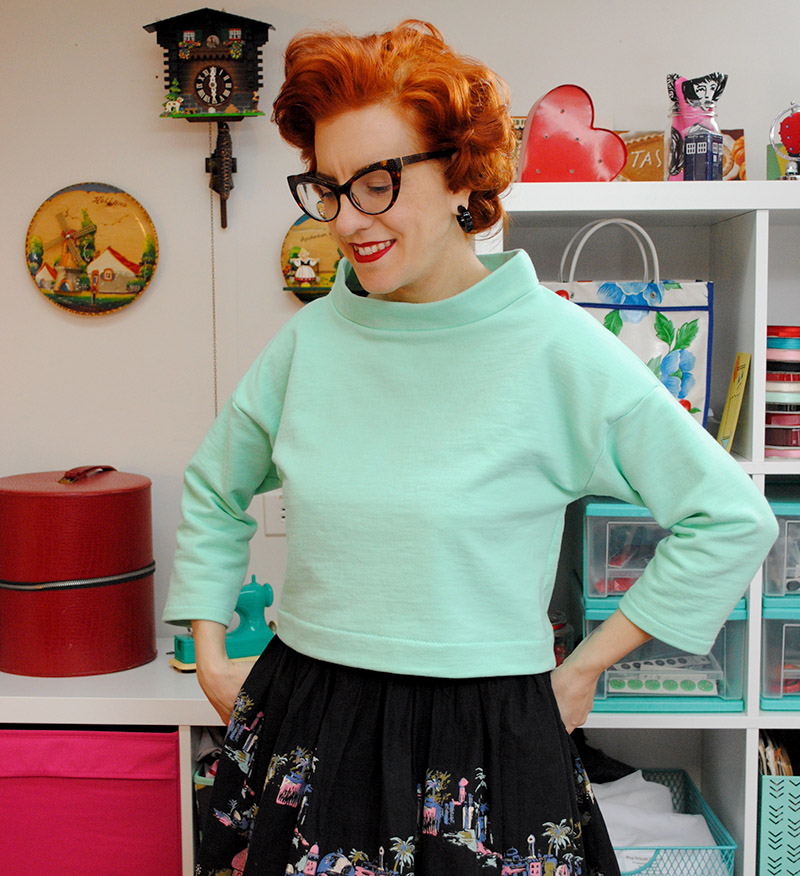 I had some mint green French terry from Mood in my stash from eons ago, and thought it would be good for kind of a wearable muslin. I don’t love to baste things together, but in this case I had NO idea what the fit would be like, so it was necessary. I sewed the shoulder seams first, and then basted on the collar. It was laughably tall! I mean, it would have overlapped the bottom part of my face. And that was after I’d taken something like 2-3″ out of the pattern piece. It seemed sooo off, but I did follow the instructions correctly. I also realized with the first go of the collar that interfacing seemed excessive for the fabric. So I lopped another couple of inches off the pattern pieces, cut a new un-interfaced collar, and liked that one a lot better. 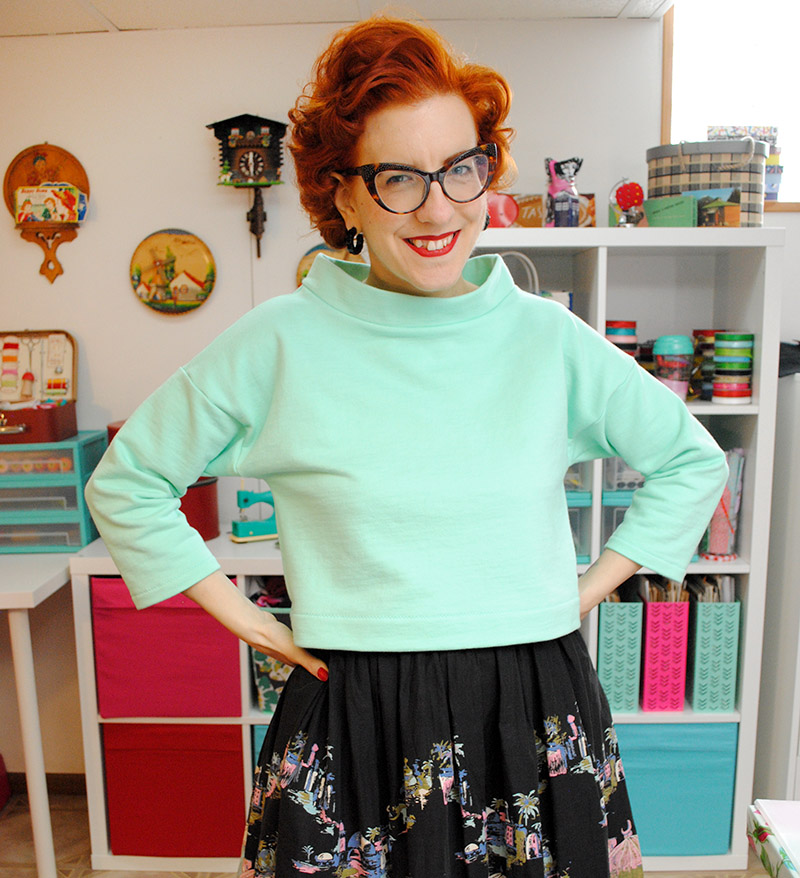 The body width and the depth of the dropped shoulder was also questionable when I basted the body together, too, even though this is the size I typically sew in 1950s patterns. On the envelope you can see this is a boxy shape, but when I basted the side seams, it was like 1980s boxy! And the dropped shoulder was sooo far down my arm. But the bodice pattern piece shape was very forgiving to change, so I simply took 1 1/4″ per side from the shoulder down to the hem and it worked out great.

I could maybe even take a smidge more off…. to get exactly the look on the envelope I bet I’d need to take another 1″ off each side in fact, if not more. But I’ll go with this size for a few versions and see how I feel over time. The comfort and roomy factor are a bit part of the appeal of wearing this, after all. 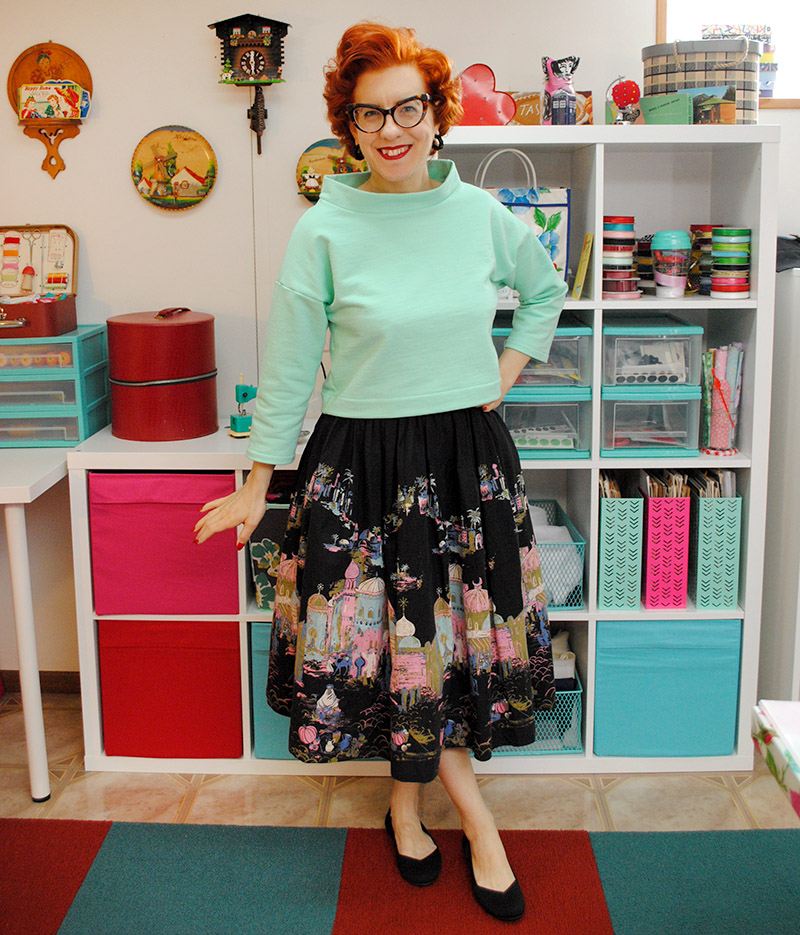 I should mention when I examined the pattern pieces I felt even as a short-waisted person the bodice length was quite short looking, so I added 1 1/2″. I didn’t need to do that, as it’s a little longer than I’d like, but I wasn’t sure until I’d worn it a bit anyway. I’ve since made two more versions and lopped 1″ back off and much prefer that length. But for this sweatshirt the length is totally fine.

I also couldn’t quite figure out why it seemed to be sliiightly longer in the back, and lo and behold preparing for version 4 (it goes fast okay! and I need tops!) I realized the back piece was somehow 1/4″ longer than the front, a mistake I made when tracing it off undoubtedly. Since I used knit fabrics I’d just eased that in and not really given it a second thought. Whoops. Fixing that combined with the 1″ shorter length and I think I’ll like the back length of other versions better. 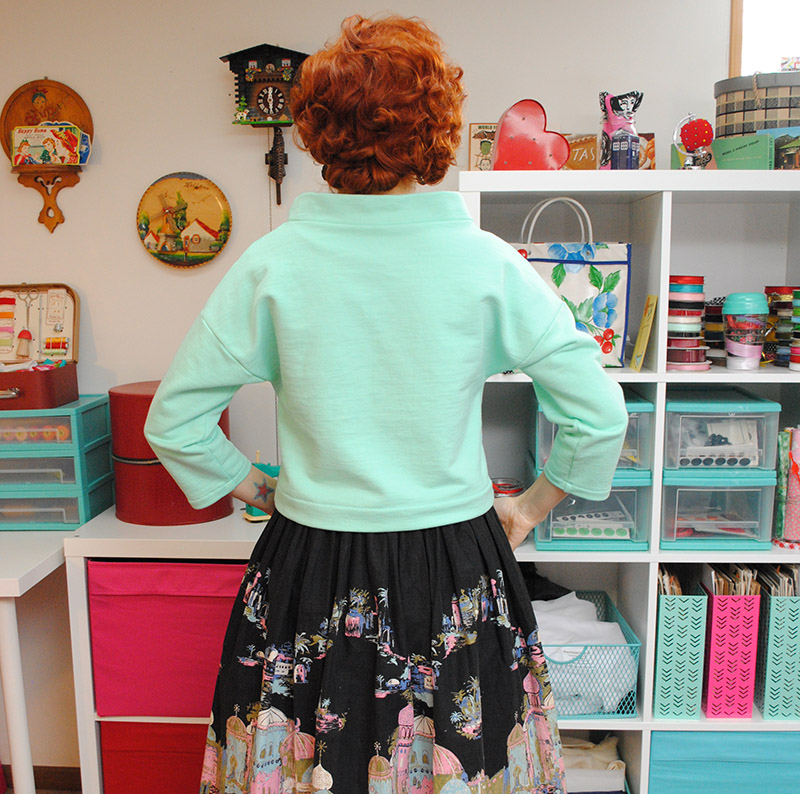 That was it for changes! I do think in a future version I may narrow the sleeves slightly, but I’ll see over time how I feel about that.

I sewed it all on my serger (but with the pattern seam allowance of 5/8″), which meant the sleeve underarm point was a bit dodgy to do, since you sew the top of the very flat sleeve cap to the body first, and then down the sides from sleeve to hem, and it’s hard to trim just in the middle of a pattern piece (i.e. just the part of the sides where the sleeve attaches). All worked out fine though, if not 100% matched up perfectly. The original pattern also called for a neckline facing, but I omitted it since I sewed this up like a knit, and think I’d stick with knits for this pattern for all future versions too. 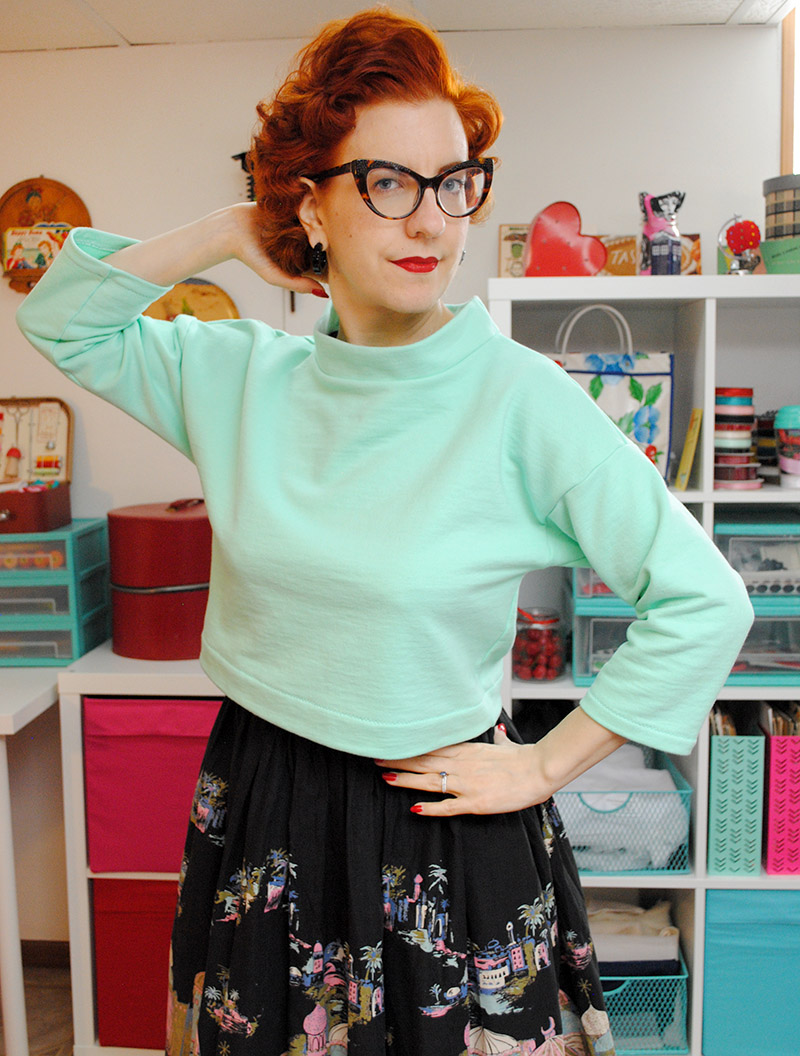 And now I have a sweatshirt that’s roomy and comfortable, has a vintage look, and is somehow cute enough to wear with jeans or a skirt. Not a combo I necessarily ever thought I’d have, and I’m pleased as punch about it. I ordered some kelly green French terry that’s unfortunately thinner than I was hoping, but I’m still planning to make another one stat, possibly with a normal neckband if I think it looks decent. And be on the lookout because my next project for Mood is going to use this pattern but with a thick wool knit plaid. Oh and then there was the wool and viscose knit version I whipped up to wear to dinner recently… Yeah. I am definitely NOT done with this silhouette. 😉 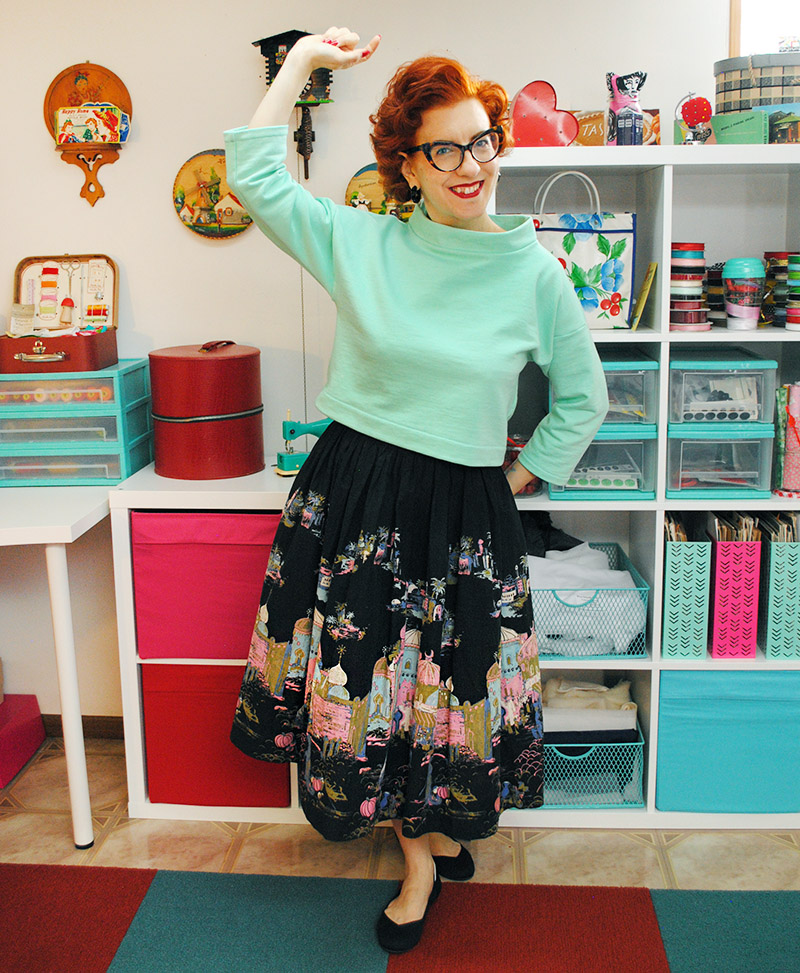 The cool thing about sewing is that you have the opportunity to make versions of things you couldn’t otherwise get… even things that maybe never existed. Like a cropped sweatshirt with a 1950s spin to it. It looks great for my modern take on vintage style and if I didn’t sew, I wouldn’t be able to have anything like it! 🙂 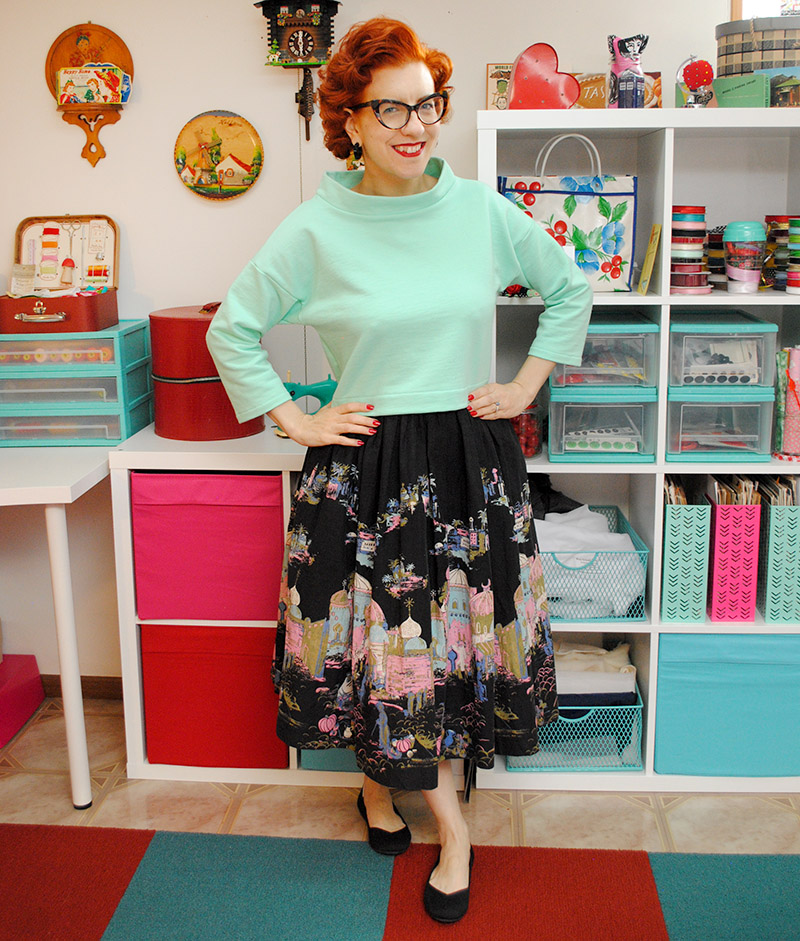