I made more jeans! And then I have some good news, and some bad news relating to that. 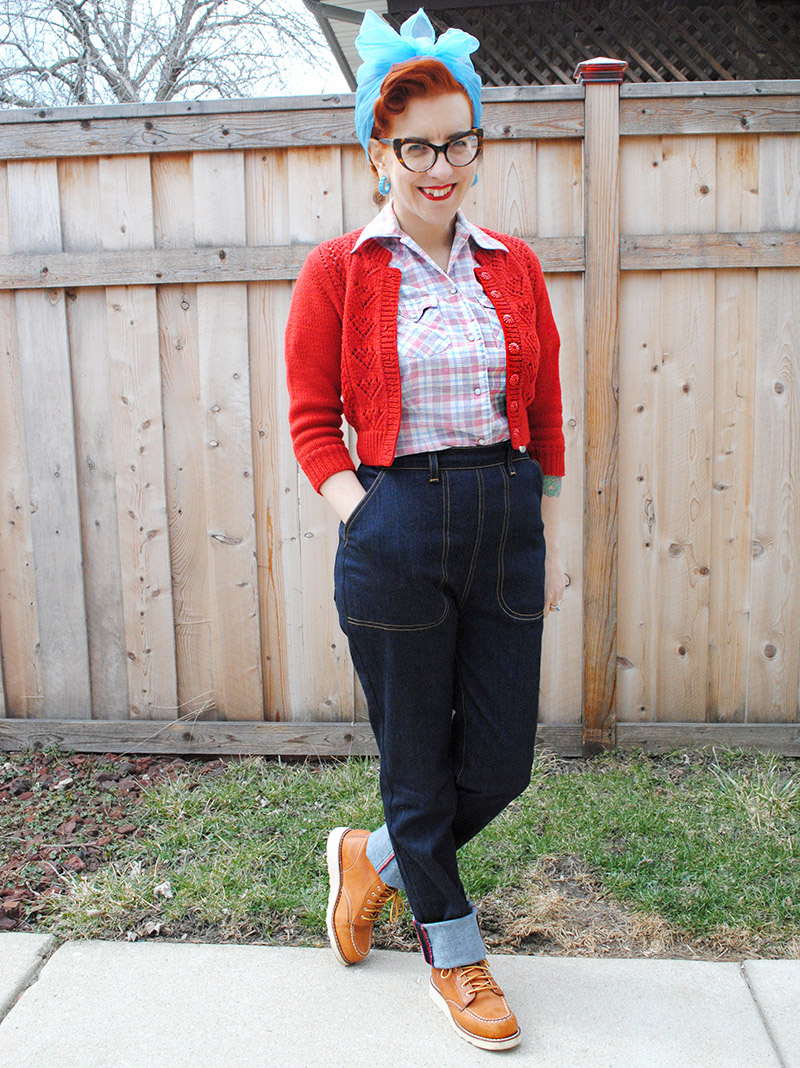 The bad news is I’ve been saying since last summer that I was going to do a vintage jeans sew-along. And I… can never get to it. Friends, if you’ve followed me awhile, and if you’ve ever read any of my tutorials, they are intense. They can take me weeks to put together just one tutorial. I rarely even do them these days because of that. An entire sew-along chock full of detailed tutorials is an epic (and unpaid) endeavor, especially for someone who works full-time and y’know, would like to go out for a drink or have a few hours of knitting time in her life, too. So unfortunately, it doesn’t seem like it’s in the cards. Never say never, but currently I’m saying no. It’s really hard to commit the dozens and dozens of hours it would take me to set it all up, all eating away massive amounts of my free time. In my heart I want to do it, but I don’t think I can make it happen. I’m sorry.

Now for the good news! I recently spent a week sewing a pair of 1950s-style jeans, and I documented the entiiiire thing in my Instagram stories. I often do sewing stories but this one was very detailed. And because Instagram now has a handy feature where you can highlight stories in curated collections on your profile page so they don’t disappear after 24 hours, I’ve saved them all in three collections—you can watch them any time! Total, it’s nearly 35 minutes of videos (with some photos thrown in) of me talking all about making these vintage-style jeans. From the construction of the hidden zipper, to tips on topstitching and navigating thick intersections. Every little thing I did. And yeah if you do the math, 35 minutes of videos broken up into the 15 second clips Instagram stories allows… that’s a LOT of videos for you! They’re quick and dirty of course, and please don’t ask about a YouTube channel as others have asked me on Instagram: that won’t be happening. There’s no way I’d put on-the-fly cell phone videos on YouTube, and I don’t have the time or desire to learn how to setup a studio properly for better video. Sewing stories are a thing to do in the moment… that’s why I find them fun!

If you’d like to see all the details (and I do mean ALL the details) about how I personally think through and construct a pair of jeans, from someone who’s made several pairs and has developed some tips and tricks along the way and mostly just likes to talk about sewing jeans, why not check it out? 🙂 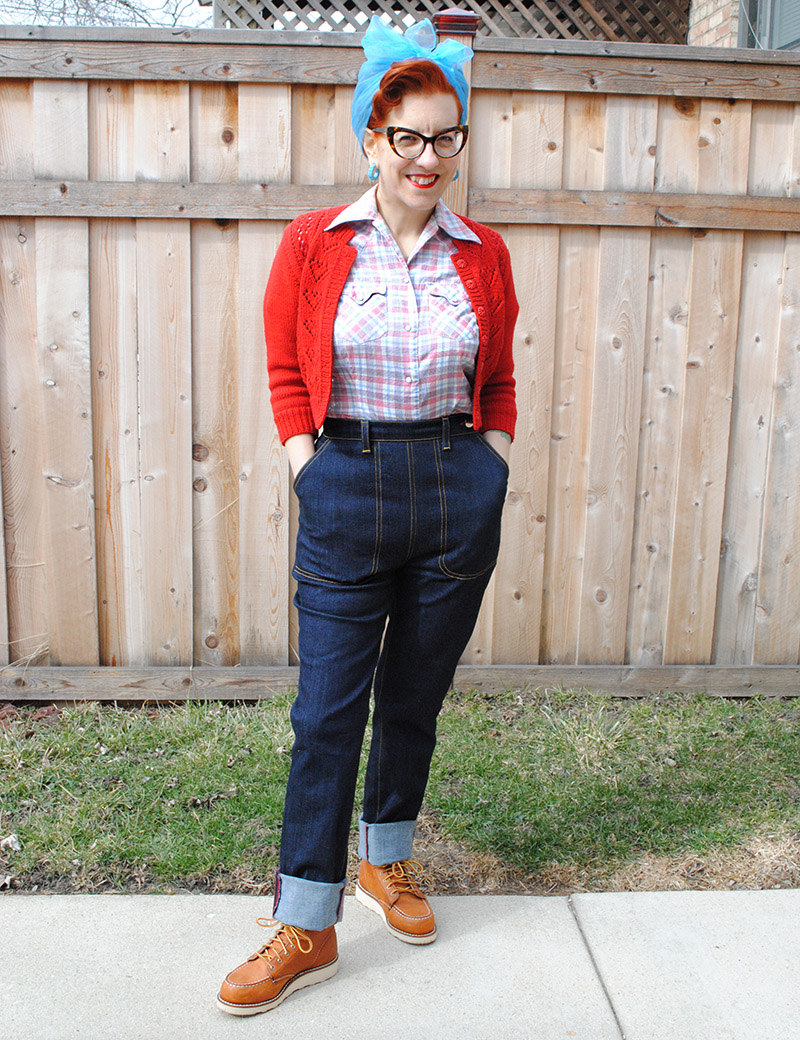 These jeans look similar to the pedal pushers I made last summer, because essentially they’re the same thing! But with more fitting tweaks and full-length legs. They’re my own highly modified version of Simplicity 4401, which has been my basic vintage trouser pattern of choice lately. I used a 12 oz stretch Cone Mills denim because I wanted these to be really comfy. My pedal pushers were 10 oz non-stretch.

They feature a hidden zipper inside the pocket, which I explain thoroughly in the Instagram videos, but is basically just an exposed zipper in a pocket facing. Yes, my waistband facing is Cath Kidston fabric! 😀 I got it on eBay sometime back.

I love these jeans but time can do some funny things to your brain like make you forget things you wanted to remember for future iterations of a pattern. Last summer I made a red twill pair from this pattern, with scooped out pockets which I like the look of, too. It also worked around an issue I have with these slash pockets (both on my pedal pushers and this pair), where the front pockets gape out a bit. You can see that in the photo below. 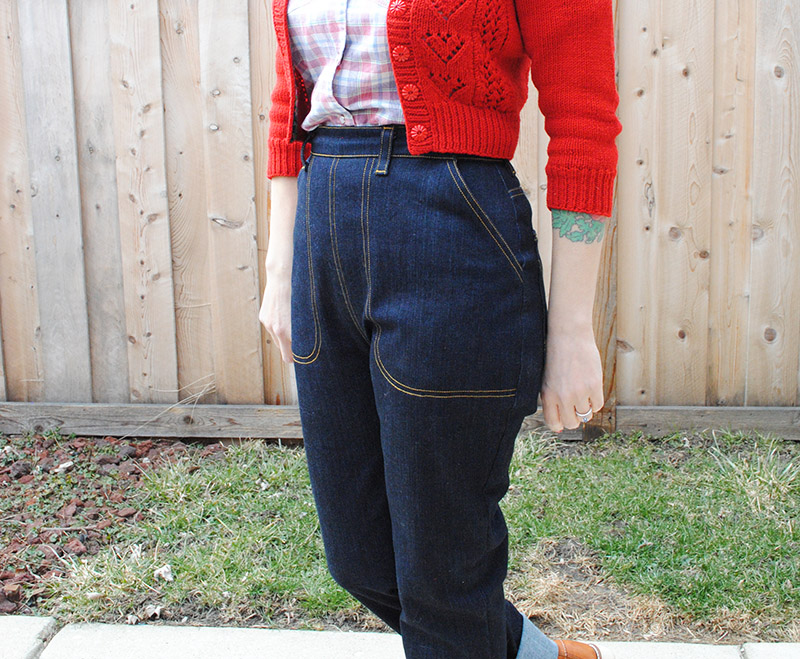 A curved pocket doesn’t do that as much, because the ‘gaping’ part isn’t there; it’s scooped out.

I’m fairly certain that’s caused by the pretty dramatic waist-to-hip ratio achieved with no darts and with such a high-waisted leg. I figured out this was likely the source of the issue with several muslins before I sewed my Spoonflower trousers. Those muslins included side seam pockets, but they will do this too if the trousers are pretty fitted.

If I take a too-big pair of Freddies of Pinewoods jeans (I still have for some reason) with the same exact style pocket that doesn’t gape, and pull them until they are more fitted around my hips, I get the same gaping. I think it’s usually less of an issue with more 1940s style wide legged jeans (like the Freddies) as they have more ease in the hip as they go down to a much wider leg. And my trouser preference has much less ease in the hip and goes down to a somewhat narrower leg. So the pocket is contorting around my hip. Anyway, it’s not just me—you can actually spot this “issue” on many true vintage women’s trousers when modeled  or in old photos, and some even had bar tacks or snaps to hold down that little gap… I can’t be sure that wasn’t just a design element, but it sure reminds me of why I put on buttons on my pockets for my Western Gingers. I’m sure it’s also different body to body since we all have different torso lengths, are bigger in the front or back, and whatnot. Obviously none of our bodies are the same, even if we’re the same size.

Anyway, I point this all out because… I don’t know. Because you follow enough sewing blogs over time and you feel compelled to point out any possible little thing that could be perceived as incorrect, lest someone then point out to you in the comments something you already know but didn’t mention or “tsk tsk” you elsewhere online. All this rambling is to say, it’s still kind of a minor annoyance to me. I forgot that last summer when I made my red twill pair with the scooped pocket instead of straight slash, I wanted to do that on my next pair of jeans, but that next pair didn’t happen until now, and clearly I didn’t remember. Whoops! Oh well. Something to do on my next pair! There’s always a next pair with me and jeans. 😉 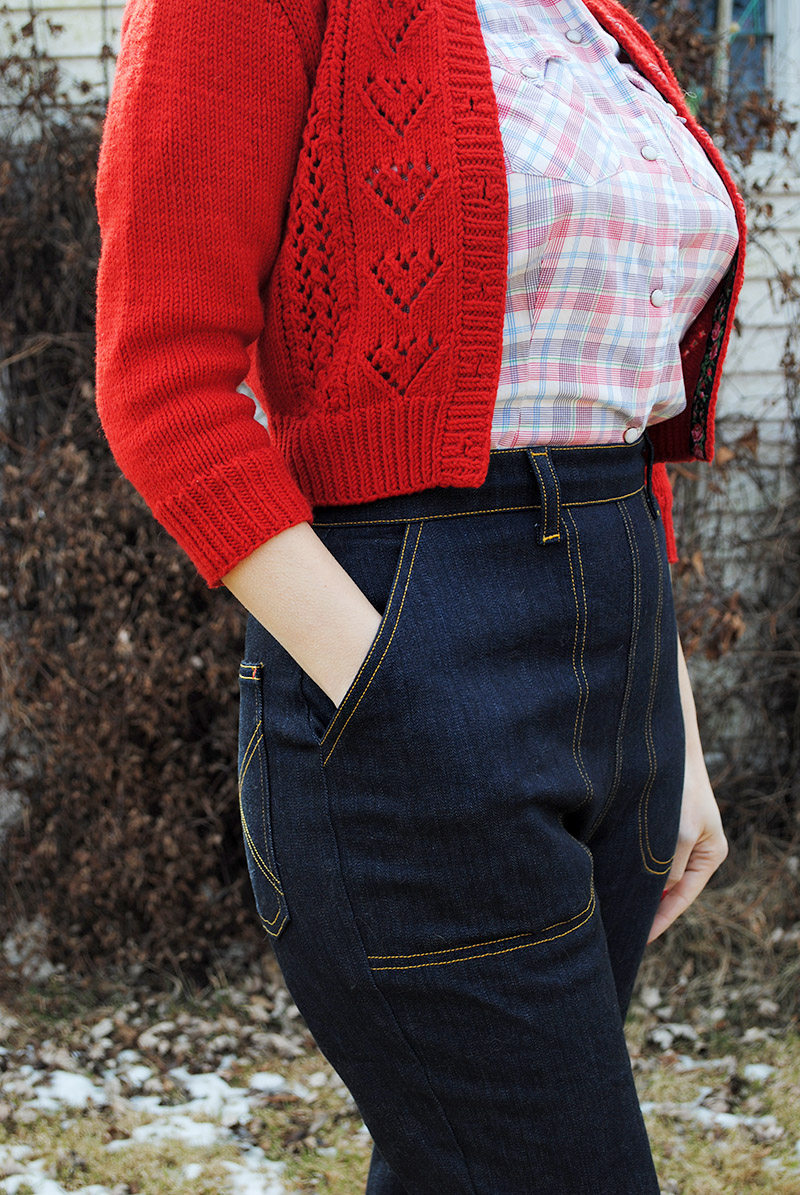 One of the things I loooove about making jeans is all that topstitching! It’s so satisfying. 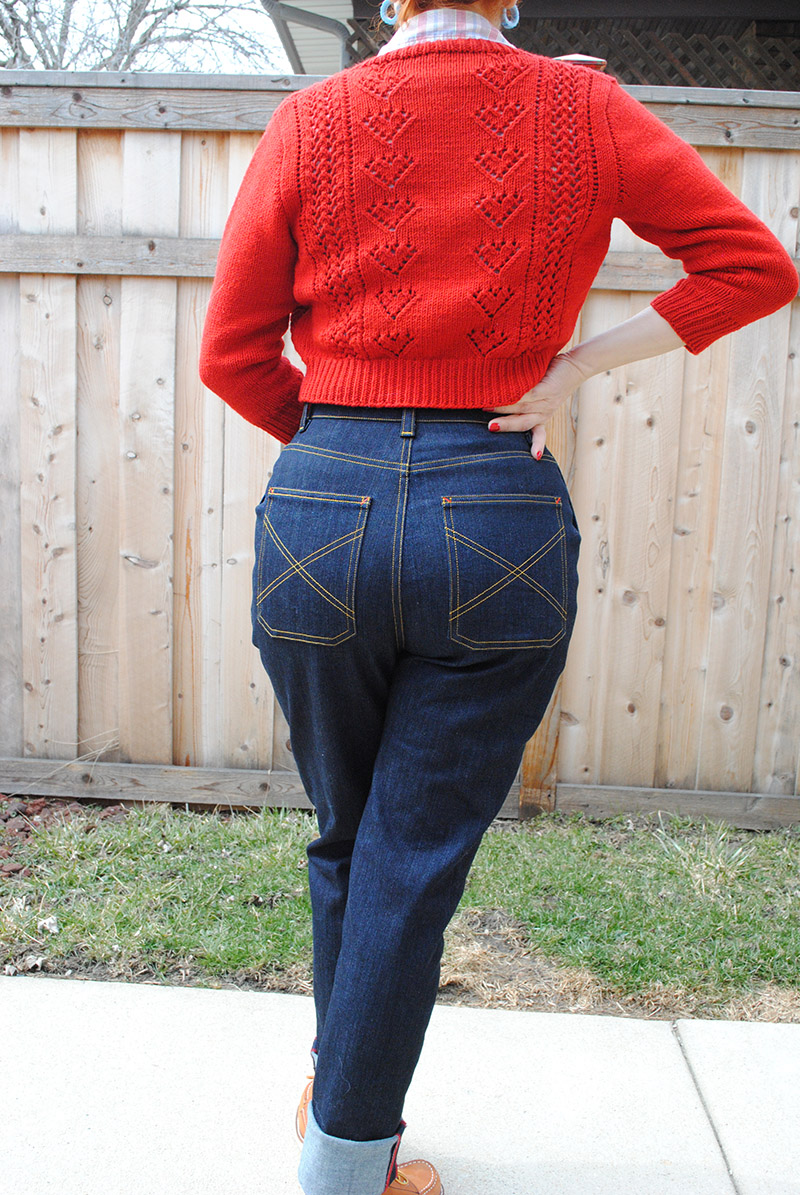 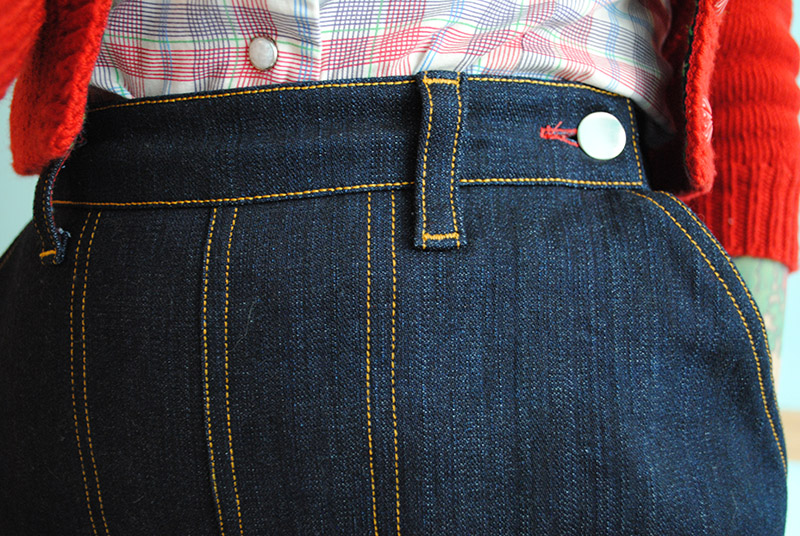 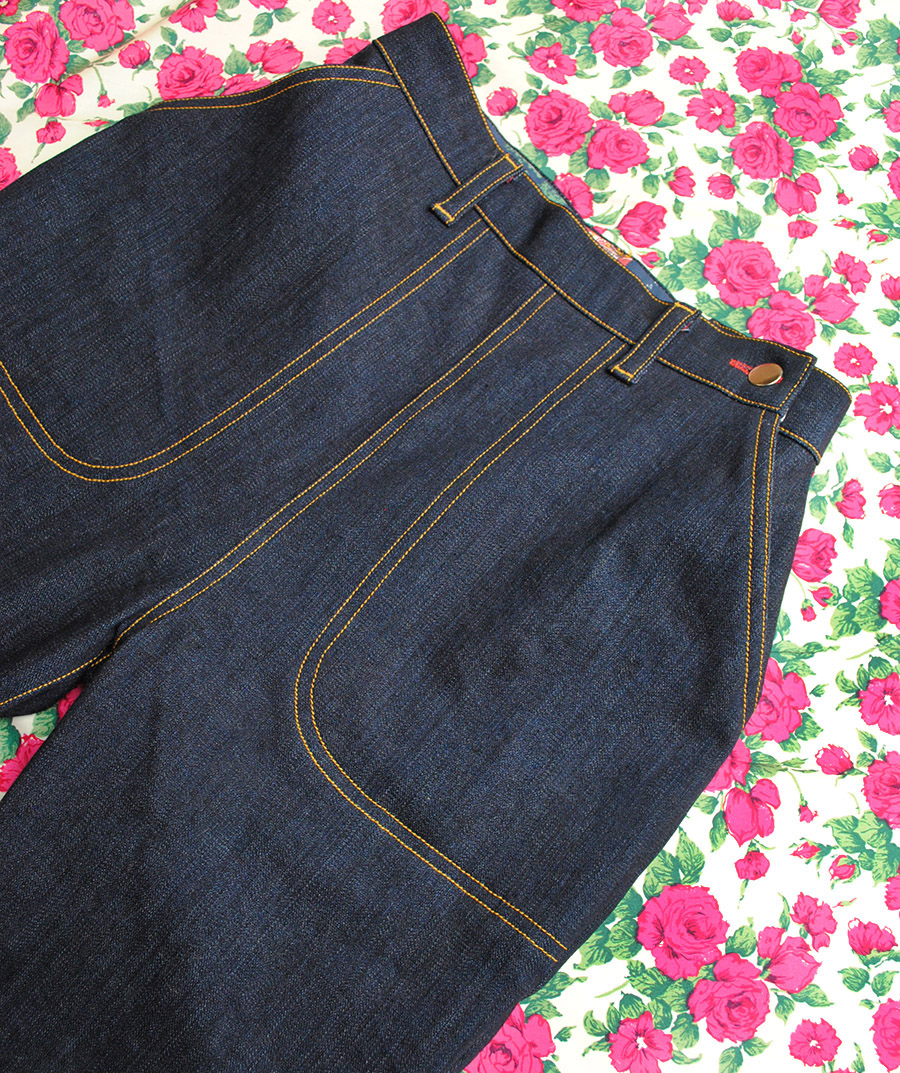 There’s not much to tell that I haven’t already talked about with my pedal pusher version and my red twill version. The construction was the same. The only thing I changed was really the fit. I applied all the changes I made in the basting stage of my pedal pushers to the pattern, but then made further tweaks during the basting of this pair. Always baste jeans!!! Every denim, every change makes a difference. This pair uses a stretch Cone Mills denim, and even though I wanted a relaxed-but-still-somewhat-slim fit in the leg, I felt comfortable removing nearly 1″ out of the crotch seam and shaved off some on the outer thigh, too. I also took a smidge off the waist at the side seams since I felt like the waistband was coming up slightly larger than I wanted for some reason. None of those were changes I could have anticipated unless I’d basted them together before sewing them up for real!

Basting fit: a terribly annoying step in jean making that is always, ALWAYS worth it in the end! 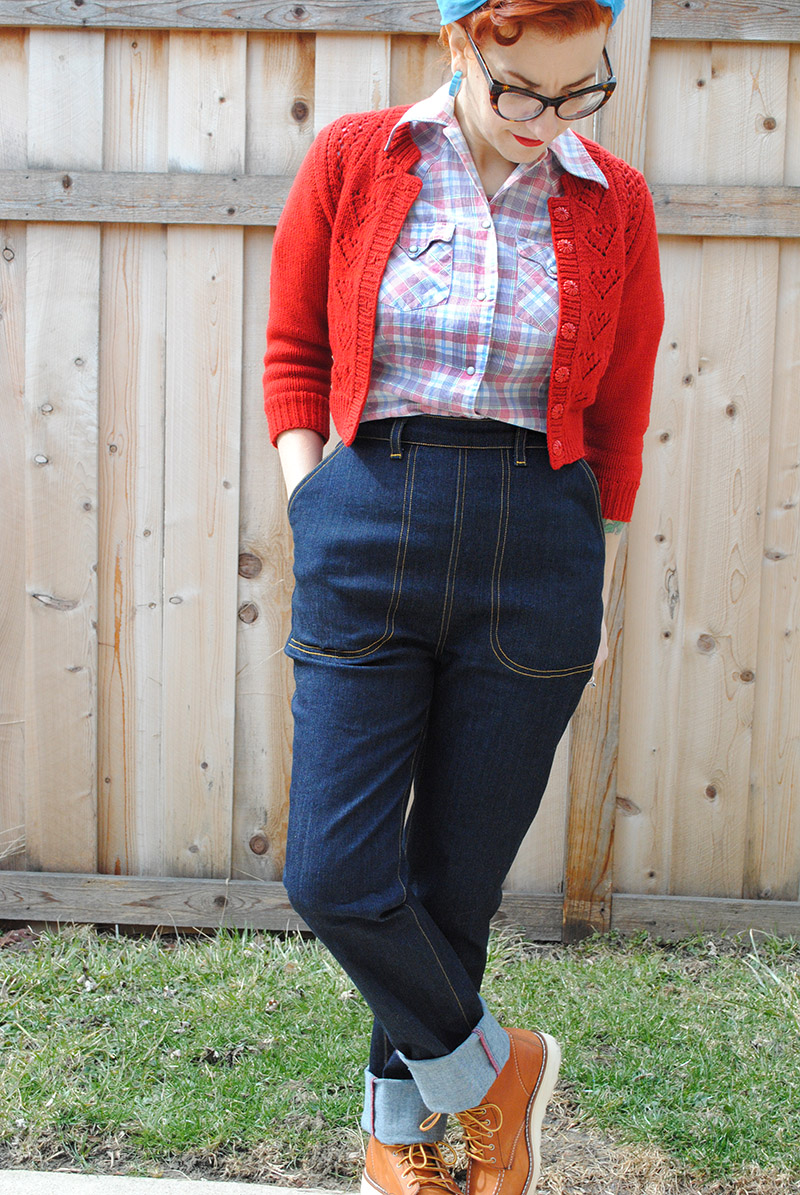 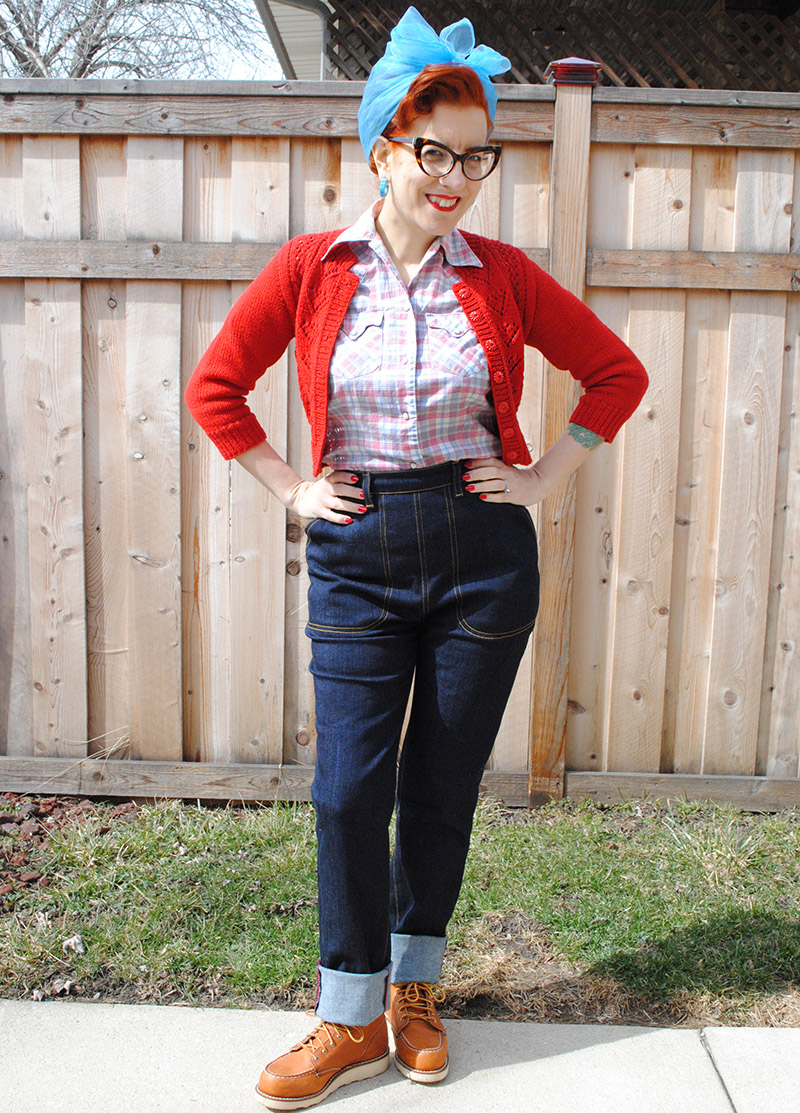 I love these jeans and I’m thrilled to finally have a full-length pair in this style and not just fly front! We’re going on vacation soon and will be staying in a cabin and hoping to do some hiking, so I had my new Red Wings and lots of plaid in mind when I was sewing these. I mean I’m a jean lover of the first order but I particuarly I love them with this kind of a look. And now I have some comfy, 1950s-style jeans to take on the trip and couldn’t be happier.

Between all my modifications on Ginger jeans and this vintage pattern, I feel pretty satisfied where I am with the state of jean making these days. I can now really execute about any variation I want, which tickles me to no end! Look for a fun variation coming up soon…

If you want to follow the making of these jeans, just visit my Instagram profile page and look for the “Sew Jeans” 1-3 series of Highlights, in the tiny round images above my feed. 🙂 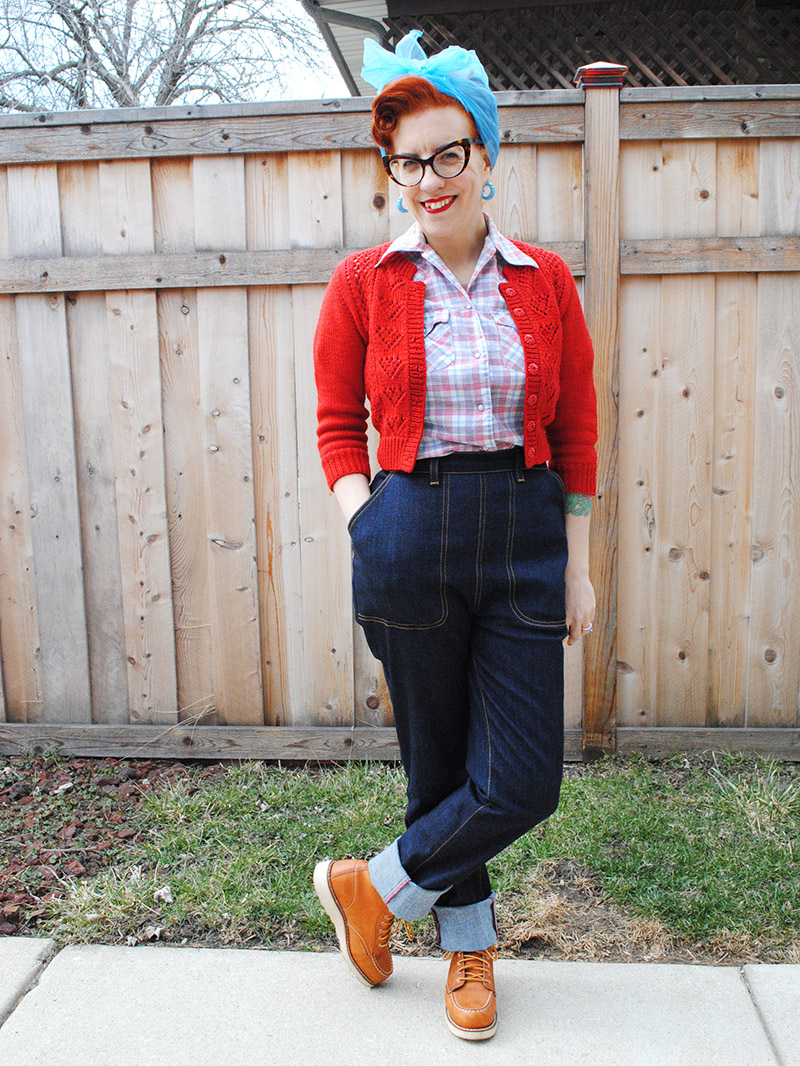 1950s style jeans – made by me
cardigan from a vintage pattern – made by me
vintage Western shirt – misc.
earrings – Bow & Crossbones
boots – Red Wing