Today I’m happy to share with you a pullover that I finished… I have no idea when. January? Maybe. Long enough ago to get to enjoy wearing it this winter, I can tell you that that much. So I realized I’d better show it to you quickly since the first day of spring has officially passed (woo hoo!). 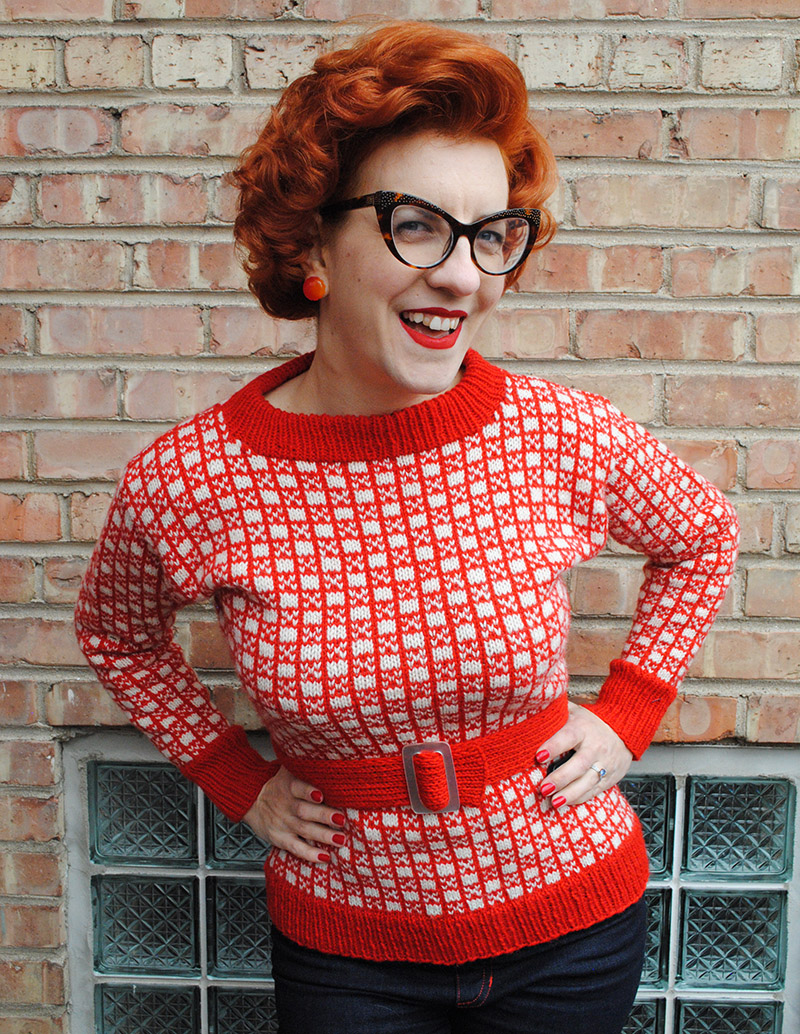 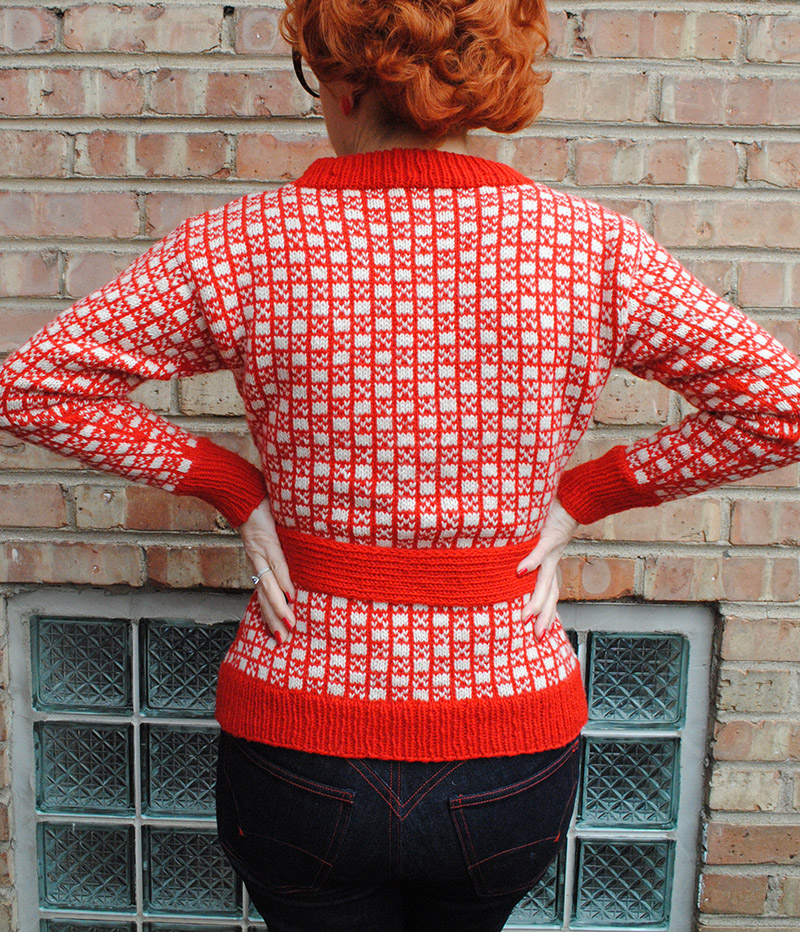 I started it way back in October. In fact, it was vacation knitting. Mel and I went up to northern Wisconsin mid-October and this was my project. I got nearly the entire body finished and a sleeve started in the five or so days we were there. That should tell you something about the lovely level of relaxation that was involved! Also, many hours as a passenger in the car. 🙂 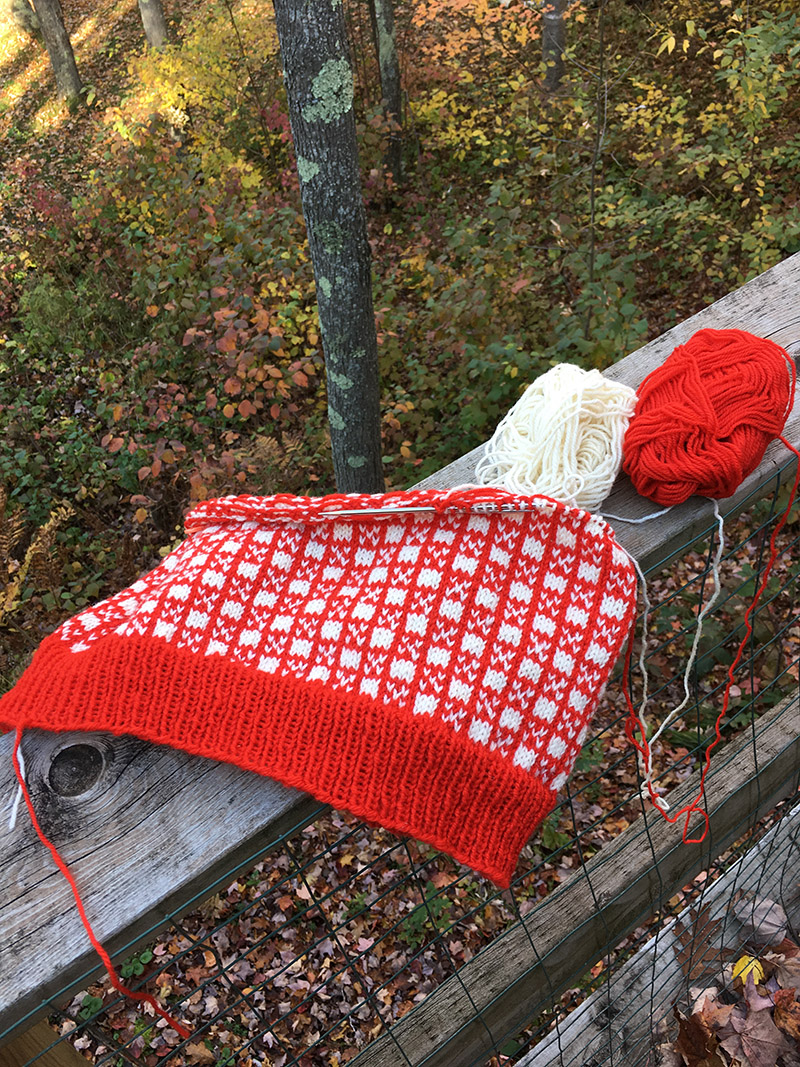 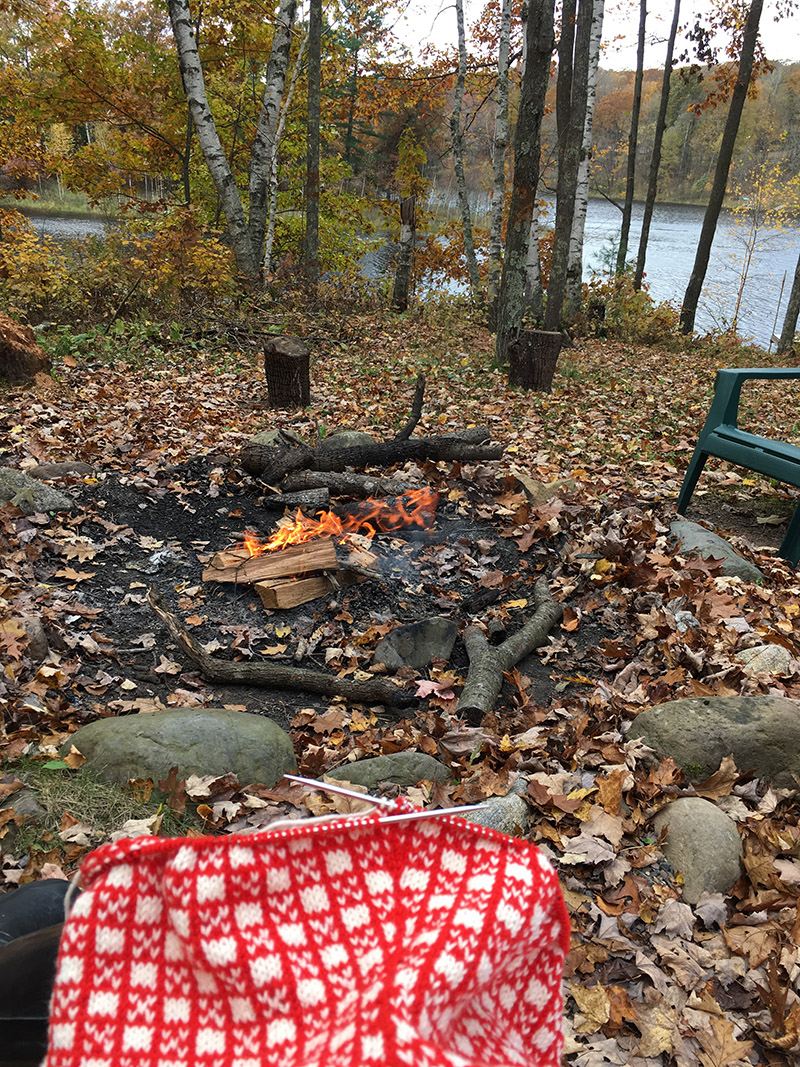 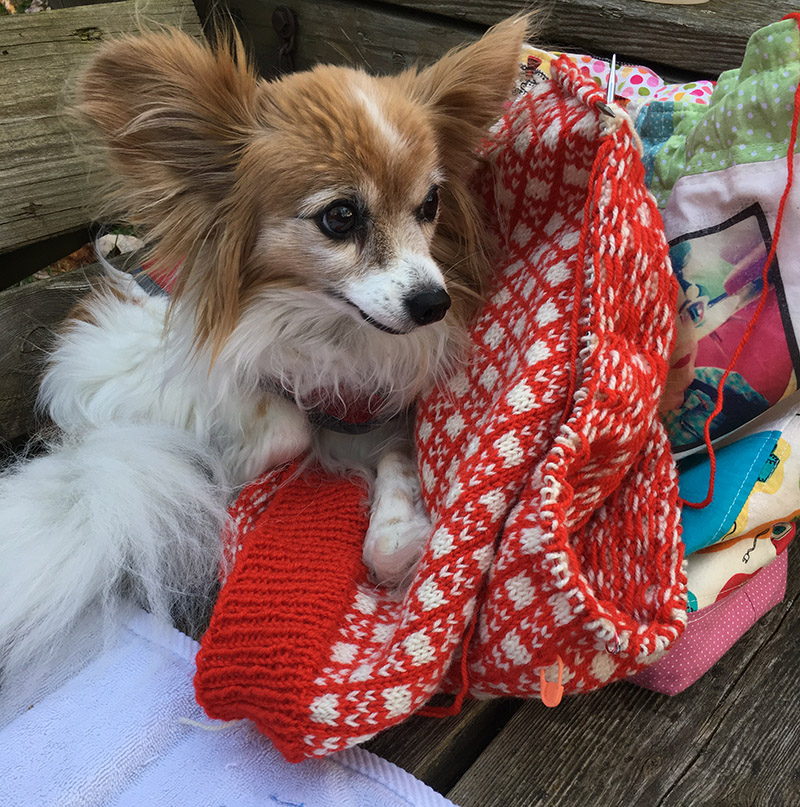 I designed the sweater to roughly emulate the look of an iconic Norwegian sweater that little Prince Harald of Norway wore in 1940 when the royal family fled the Nazis. How very poignant of a sweater to knit this fall and winter. I’ll leave it at that.

If you’d like to knit the children’s version, there’s two patterns on Ravelry by different designers: one in English (“King’s Sweater”), one in Norwegian (“Prins Haralds genser”). If you speak Norwegian (I don’t) or run it through Google Translate, you can read designer Nina Granlund Sæther’s blog post about her pattern and the inspiration, with some photos of the original sweater. I used the same yarn as the King’s Sweater pattern, Rauma Strikkegarn, a delightful wooly DK-weight Norwegian yarn that I fell in love with while working on this project.

Speaking of Ravelry, here’s my project page with some more notes and progress snapshots. My version of the sweater takes the same general idea at the prince’s sweater, and gives it a little twist. The end result is a long-line women’s cardigan with waist shaping and a matching belt. I’m calling it my Princess Harald pullover. 😉 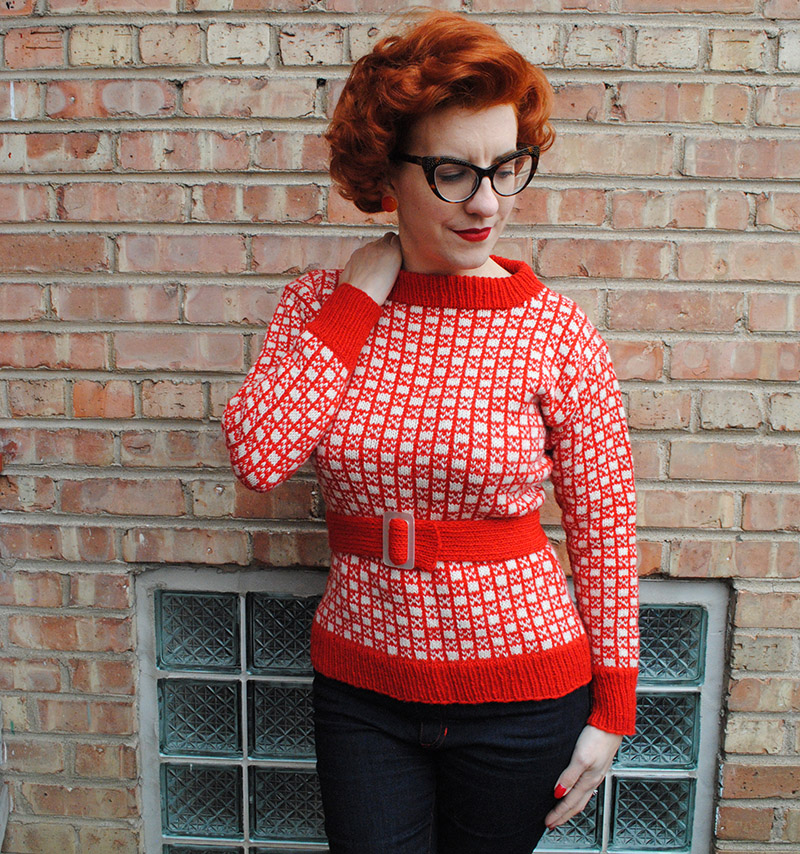 In fact, the waist shaping is one of my favorite parts of this sweater, it looks so nice! Waist shaping in colorwork takes a bit of thought to get it to look nice. The way I worked it was I used a center stitch that I kept in red, and then I worked paired increases and decreases in the next stitch on either side of the red ‘seam’ stitch. 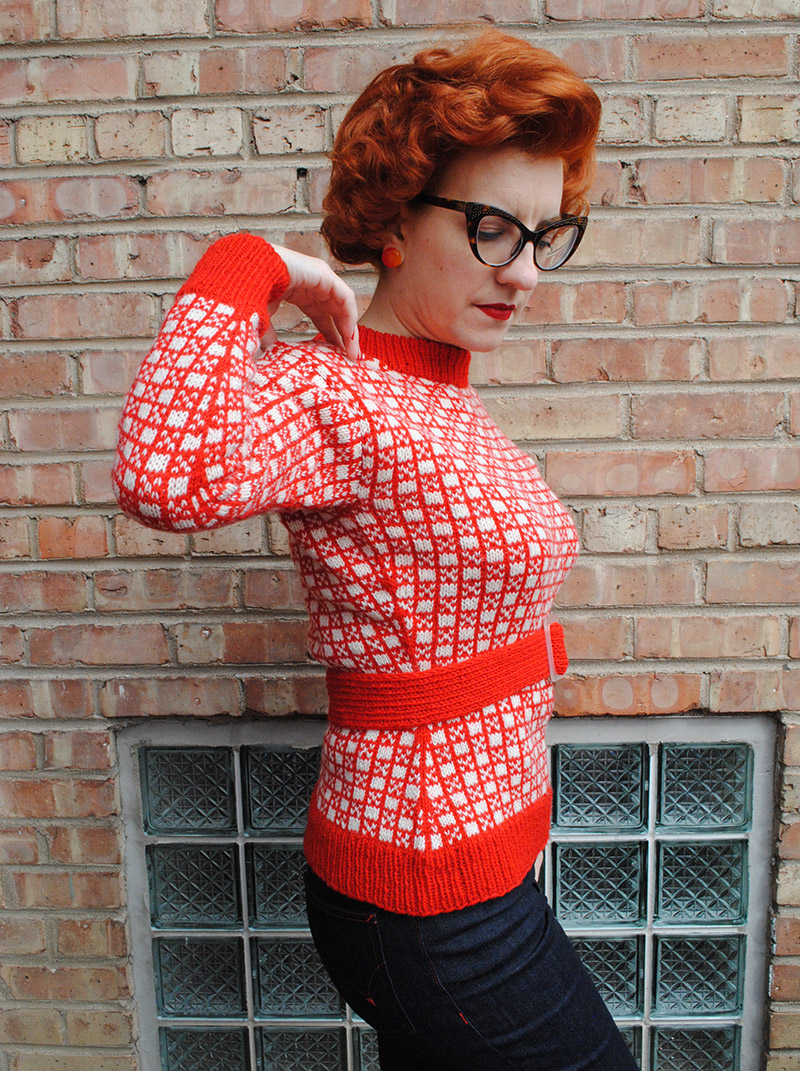 For reference, the very best way I’ve found to work paired increases in colorwork is to work a YO in the color indicated on your chart (wrapping in opposite directions on either side of the stitch to get the new stitches mirrored), then on the next row twist that stitch by knitting into the opposite side so you don’t make a hole (so if you did a front to back YO, knit into the back leg of the stitch). A much more in depth look at that technique is in this old blog post by Eunny Jang.

Here’s what that looked like in progress, very tidy and aesthetically pleasing (well to me, anyway): 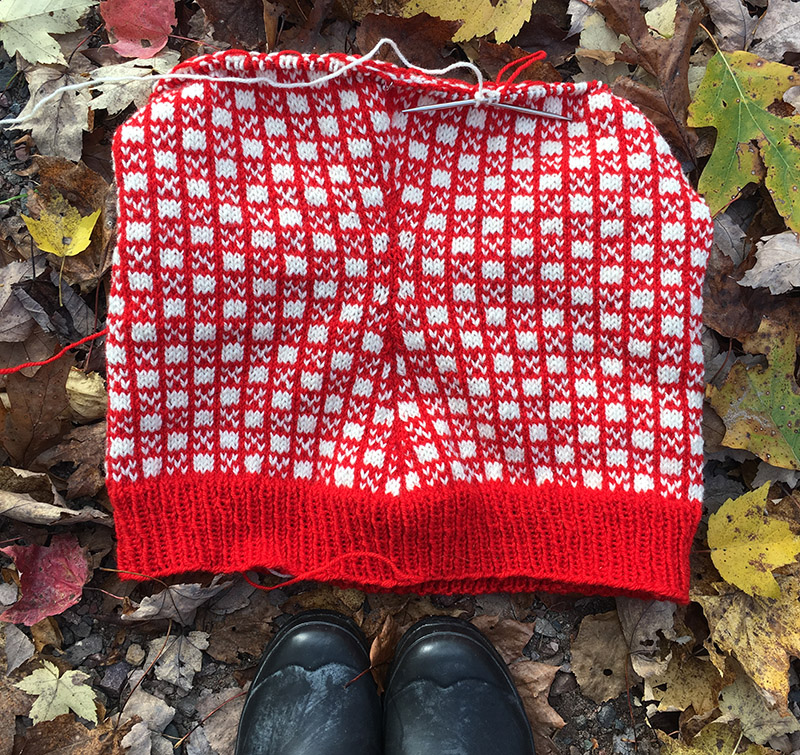 I wanted to do a dropped shoulder for this pattern, a very traditional Scandinavian sleeve. In theory this means you can knit the sleeve down from the armhole and there’s no shaping except under the arm (no sleeve cap), but I could tell that the direction of the Vs in the block next to the squares (the one that looks like the 5 on a die) would really bother me if they faced upside down, so I knit the sleeves flat and set them in. 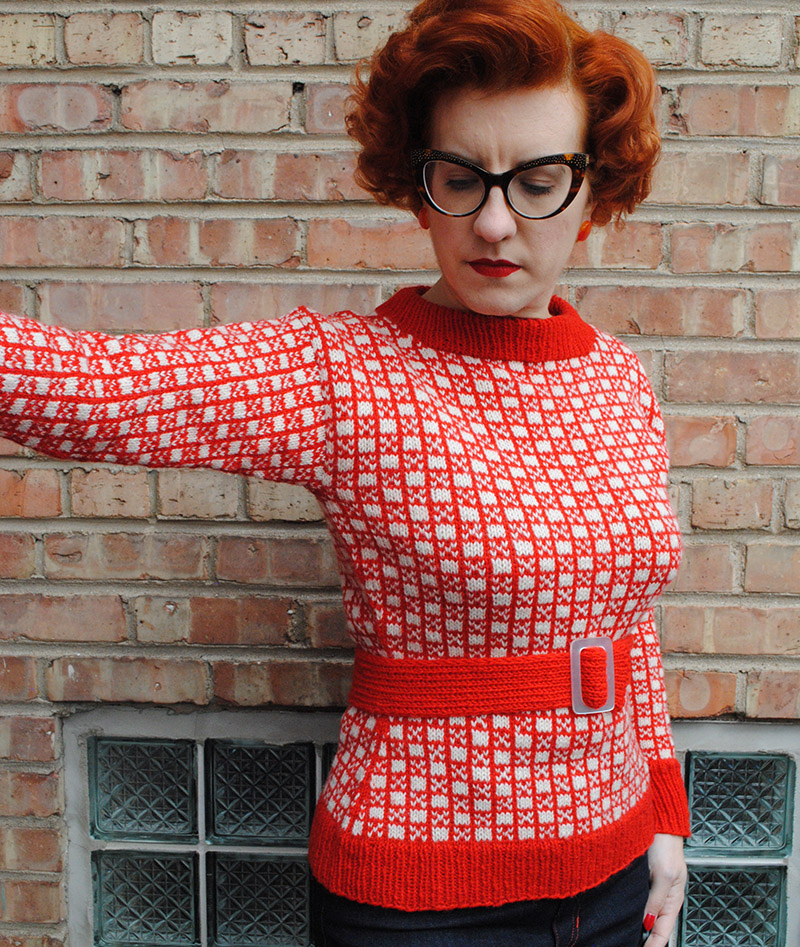 The thing about drop shoulders is they’re usually meant for pretty boxy bodies. There are a few knitting patterns out there that feature fitted bodies and dropped shoulders like Ebba so I thought I’d give it a try, but when I first tried it on, I felt it was pretty uncomfortable under the armpits. But a nice, aggressive wet blocking helped that.

Here’s a weird photo just to show the shaping on the sleeve, done in the same way as the waist shaping: 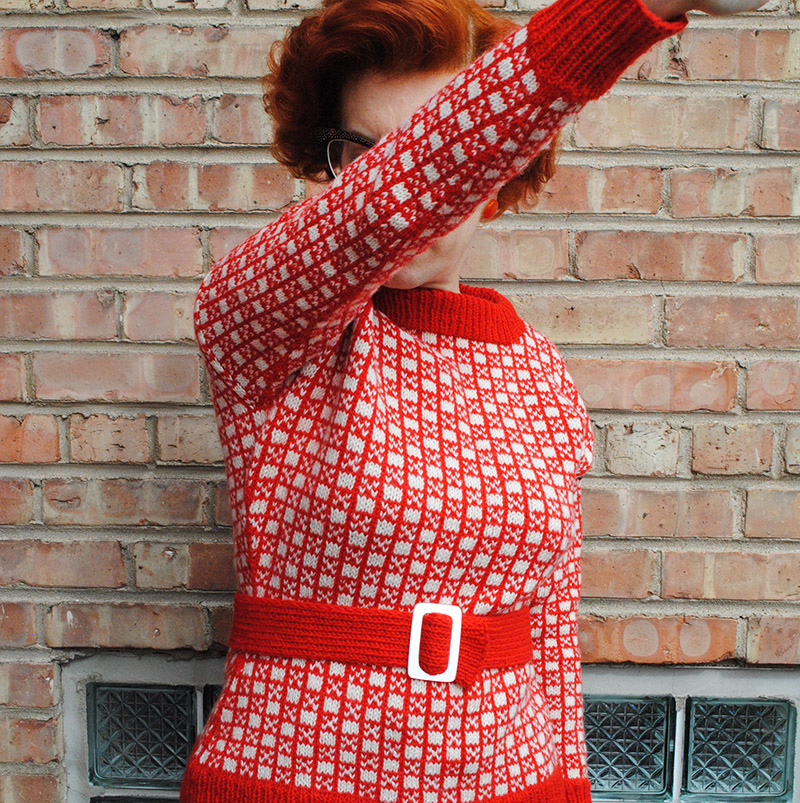 I’m very pleased with the fit overall, especially the sleeves, because gah, stranded sleeves that are too tight are the worst. (Trust me, I’ve done it, I know.) 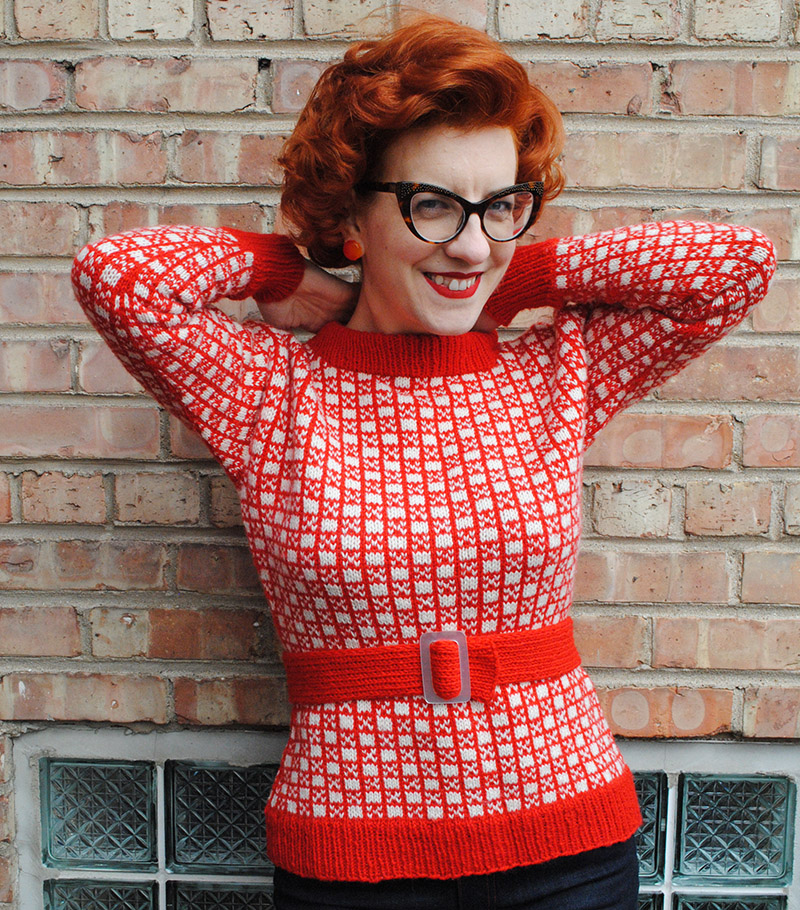 I knit the body in the round and used steeks for the armholes and neckline, a bridge of stitches which you cut later to open up the holes so you don’t have to knit those sections flat. Here’s a photo right before I opened up the neck steeks in the car on the way home, looking down at the top of the (already seamed) shoulders. I admit, even knowing how to setup and do this technique, there’s still an element of trust when you look at something like this all scrunched up looking crazy! 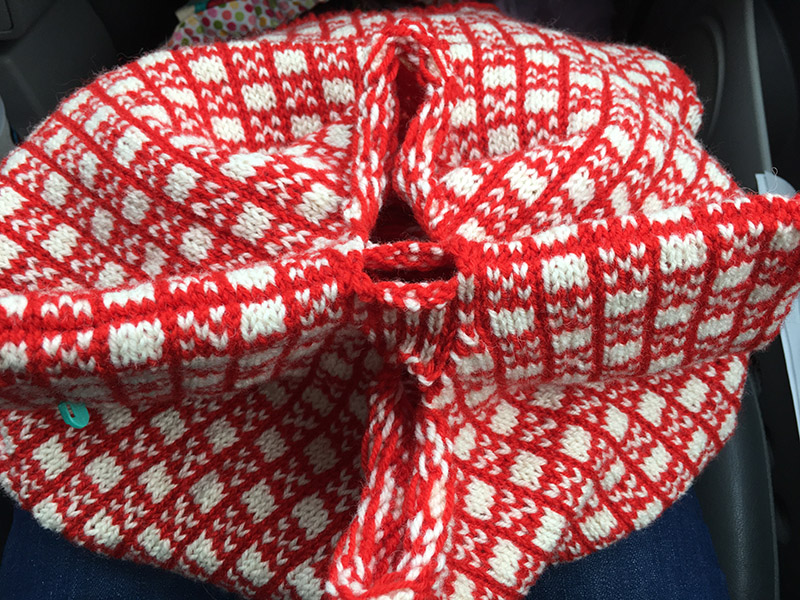 The other interesting elements are the neckline and belt. I knit the neckline in 1×1 ribbing twice as long as I wanted, and folded it in and seamed it shut, to make a nice squishy band. I wanted kind of a funnel neck in a nod to late 50s and early 60s ski sweaters, and I like the result a lot. 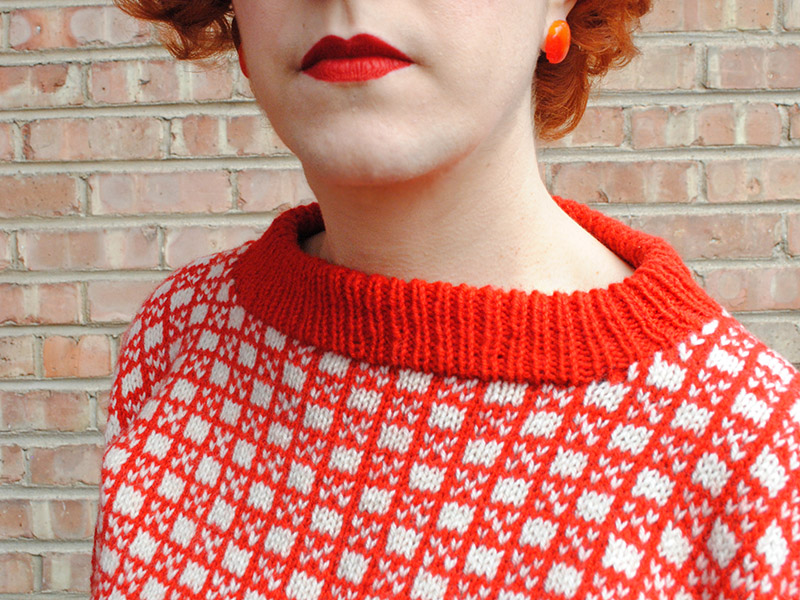 And then there’s the belt. I really hate knitting ribbing but decided the best looking result would be ribbing, so I sucked it up. It’s just 1×1 ribbing the length I wanted, slipping the first stitch of each row for a nice clean edge, and finished off with a vintage buckle from my stash. 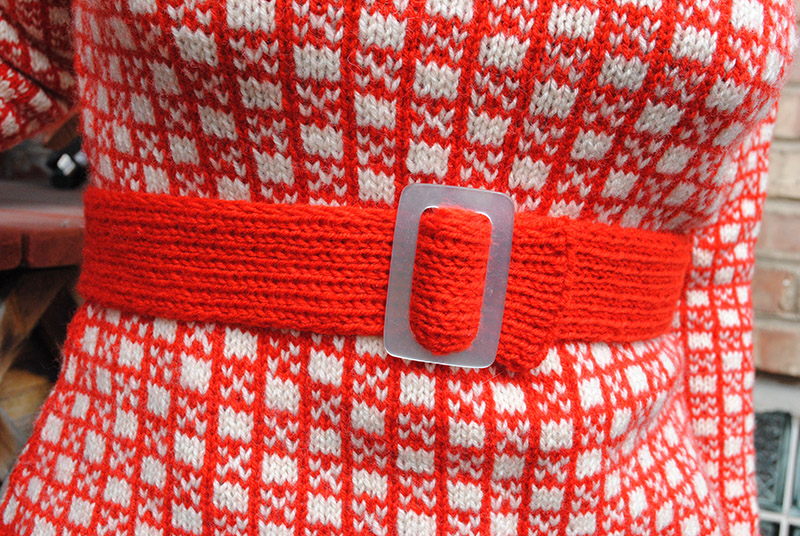 I think you can probably tell I’m pretty happy with this sweater, huh? It really was a joy to knit. A very repetitive but easy stranded allover pattern, in yarn I loved working with. And it came out exactly how I was envisioning in my head. Can’t beat it when that happens with a project! 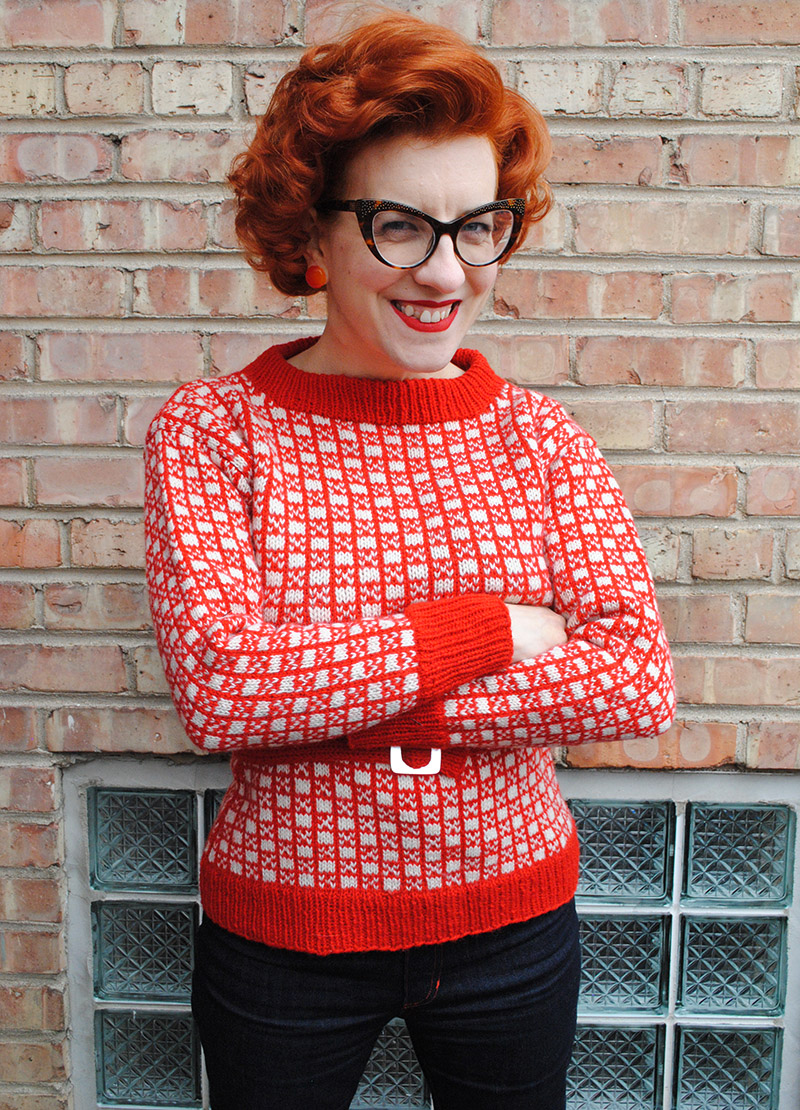 But I admit—I’m also super happy that I get to put this away until next winter now! 😉 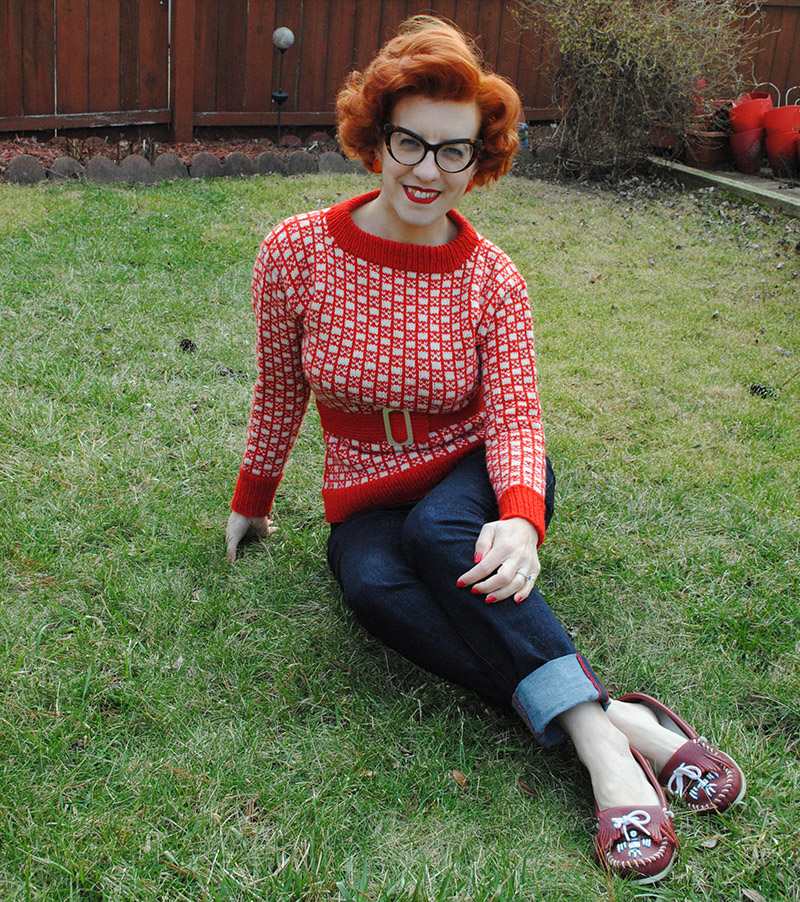