We’ve really had kind of an extended summer here. It’s late September and I still have roses and a few day lilies (?!!) blooming, and the tomatoes are going crazy. This week, the temperatures have cooled, and so the projects I’m sharing today are assuredly the last things I’ll have made for summer this year!

Rounding the bend on my third pair of jeans in a row, I hit a wall a few weeks ago. I don’t typically stop sewing mid-project. I fact, I nearly never do (unlike knitting where I do it all the time). But this time, I did. I just needed… something that wasn’t jeans! (And when I picked them back up, I realized there’s a couple of stumbling blocks I need to work through. At some point…)

Before it was absolutely too late to squeeze in any more sewing for summer, I sewed an outfit to (kinda) bridge the seasons: capris, but with a 3/4 length sleeve top that I could wear all fall. Ta da! 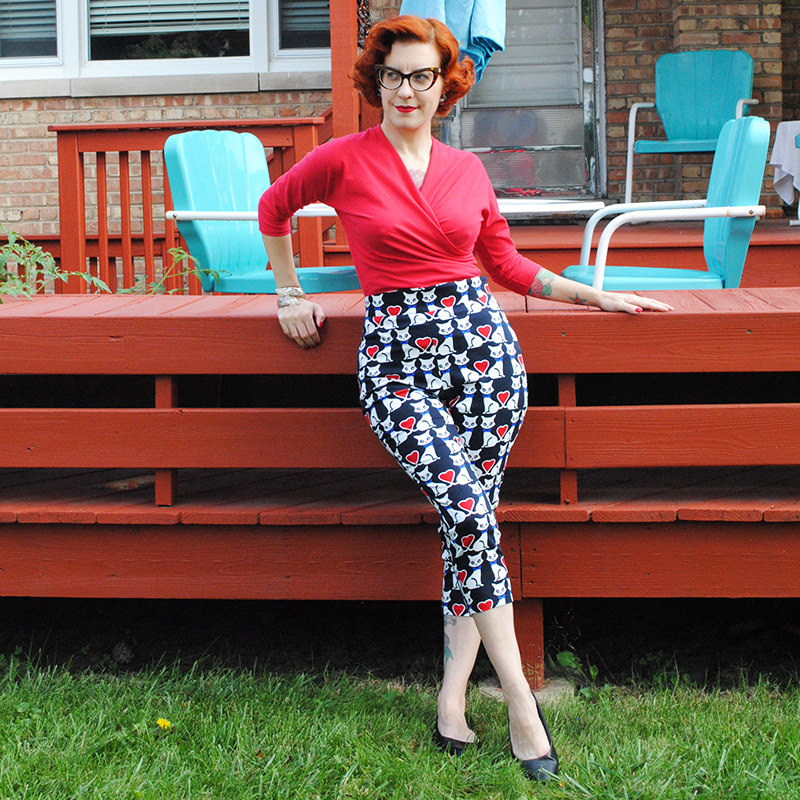 Both are Butterick patterns I’ve sewn several times before—B5895 for the capris, and B6285 turned into a surplice top (here’s my tutorial on how to do just that). I’d mostly forgotten about the surplice top pattern over the summer, but thankfully it popped back into memory as I wanted more of these in my wardrobe for sure, so I started back up with my favorite color, red! 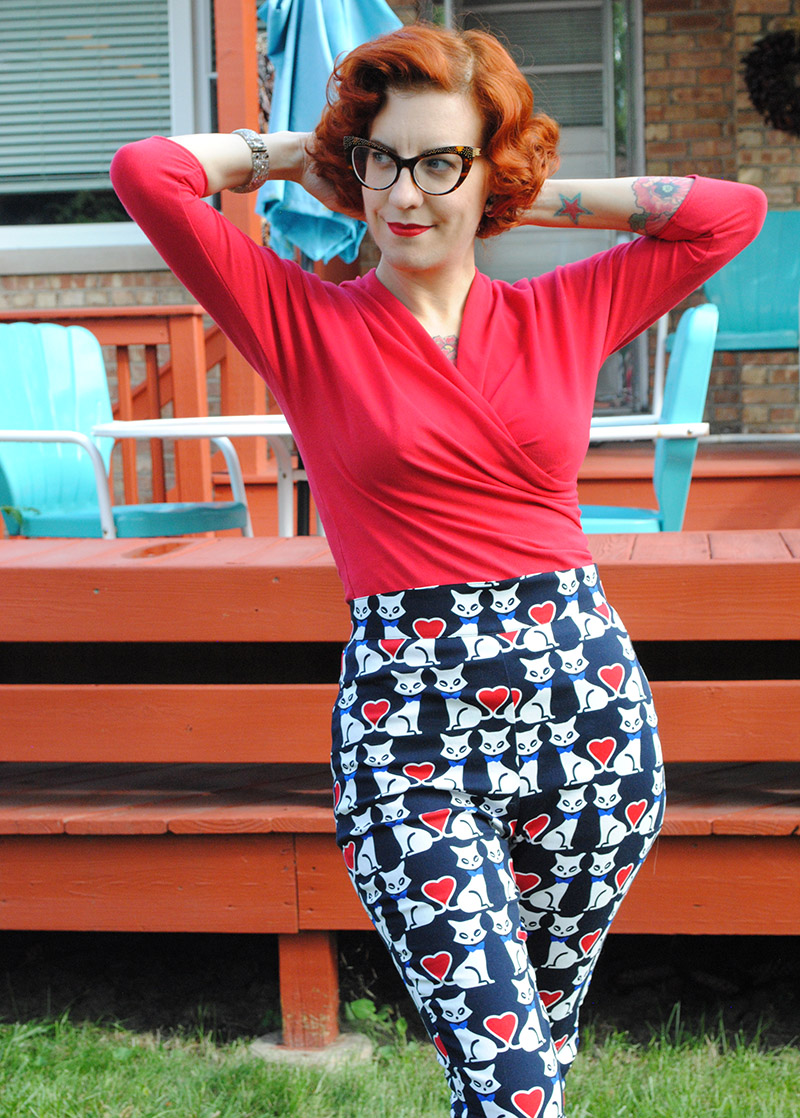 The capris I made using the same pattern I use for cigarette pants (last used on my pink leopard print ones). This is a stretch cotton sateen from Harts Fabric. The fabric is by Telio (why am I suddenly seeing this manufacturer’s name all over?) and is adorable. Love cats! There’s a big but though. I discovered it has abysmal recovery and within a couple of hours of wearing these capris, they’d stretched out considerably (all except the hem and the interfaced waistband). Ugh. Big thumbs down for that. They’ll have to get washed and dried each time I wear them, which I don’t love. 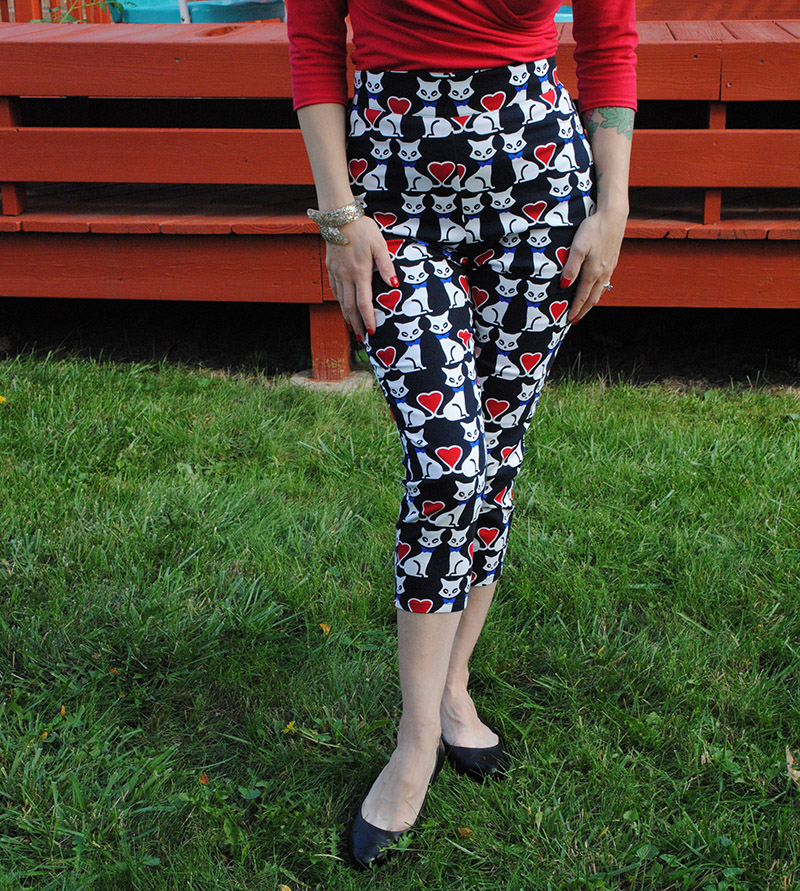 I tweak this pattern every time, which sometimes works and sometimes doesn’t. I could stand to be slightly better at documenting on the pattern pieces what I’ve done, as I have so many versions of this pattern floating around and sometimes I’d like to dial back changes, but find it hard to do so. Especially when I have notes like “maybe sway back adjustment?” Um thanks, really helpful, me. Even though I keep a pretty details sewing notebook, I’m not always great at keeping track on the actual pieces.

Style-wise, I changed the waistband so that it has a slight curve at the center front, which you can sort of see below, but the print is so busy it masks a lot! 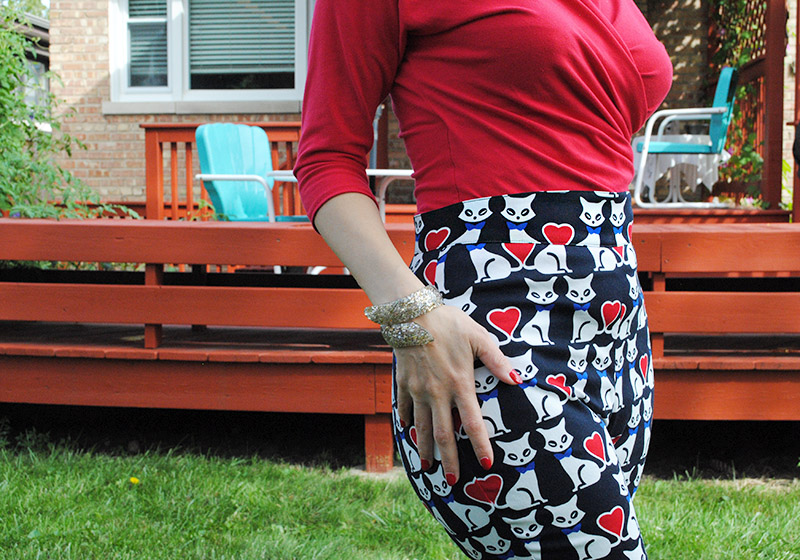 I like it, but I forgot to ease in stay tape around the curve to force it to cling towards the body. I totally meant to and forgot in the end! So it bows out a bit at the front. Not really noticeable, but annoying to me. It’s exacerbated by the waist having stretched out about an inch since I tried the capris on a few times without basting the waistband on (since I was tweaking the leg fit). I know better, but I was in a rush so I did it anyway and paid the price. Not a big deal though, certainly not worth fussing and taking the darts in bigger or whatnot to make up for it.

I also attempted to line up the print slightly, which I’ve discovered on this pattern is damn near impossible! Kind of daunted at the idea of trying them in plaid, which I’d really like to do in a stretch wool suiting for winter. I think the only places I could get the lines to match up would be the center front and center back seams, the legs seams would be basically impossible. Maybe I’ll just stick with a mini print like this houndstooth! 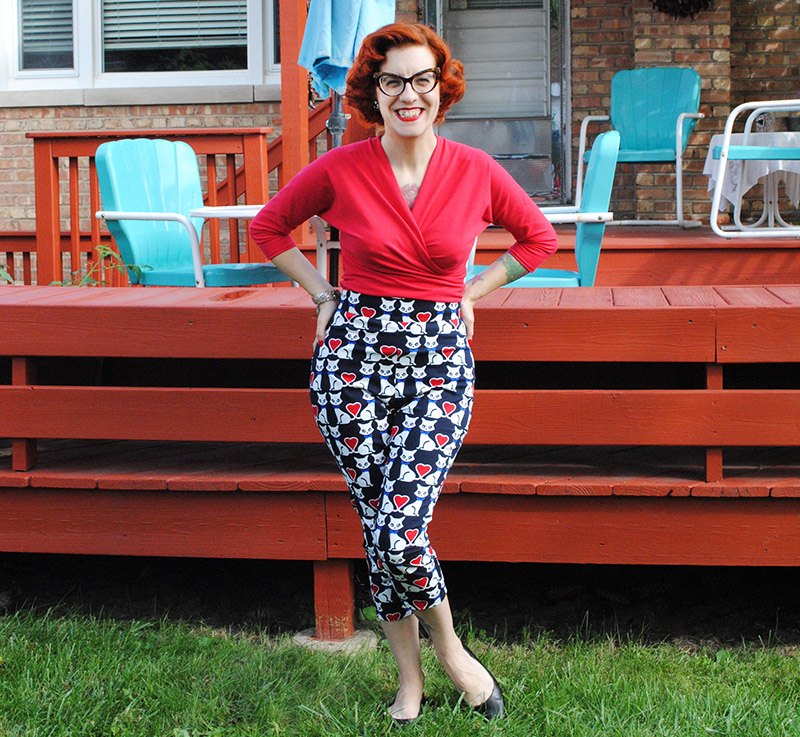 Anyway, the top was great to sew, as for once I just pulled out the pattern piece (yes, one piece) and got to sewing! No tweaking, huzzah! No issues, huzzah! Good fabric choice, huzzah!

I’ve found through a few versions that this surplice top does best with a knit that has a nice stretch and recovery, like a cotton spandex. That way the surplice front stays pretty close to the body. I’m really pleased with this version and basically now want one in every color. 😉 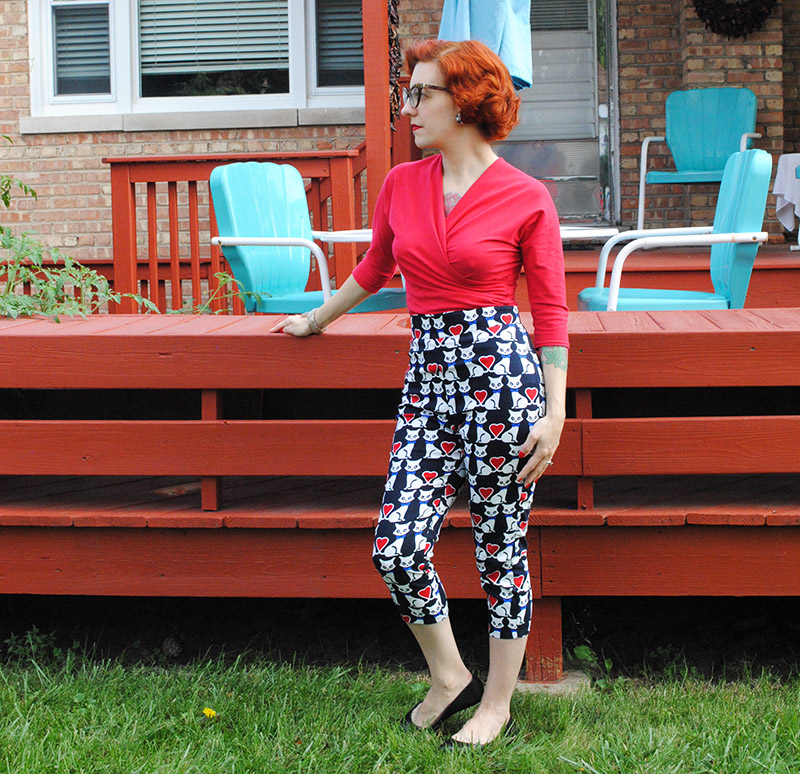 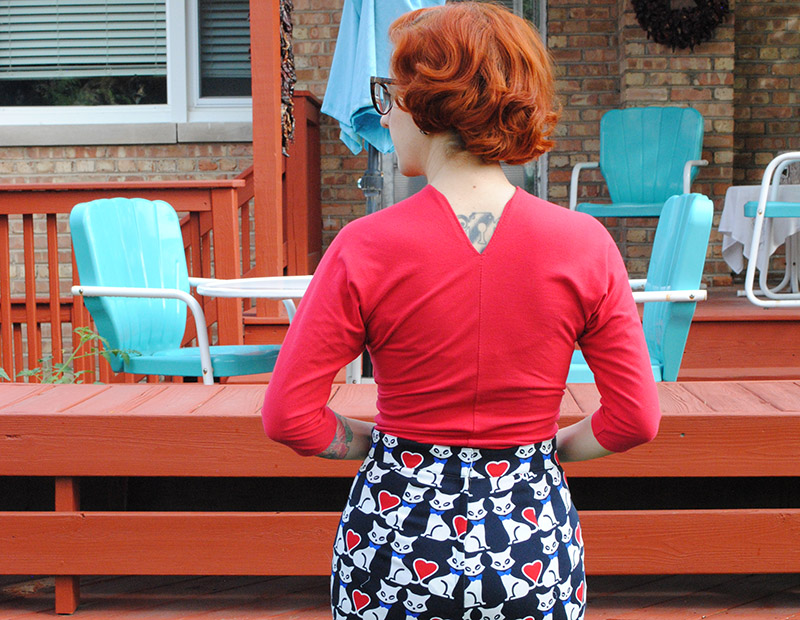 It was a fun outfit to sew, and I wore it down in St. Louis a couple of weekends ago when we went on a road trip. One of my goals was to finish the capris in order to show them off to my cat-loving 7-year-old nephew. Wish I’d thought to get a photo with him while I was wearing these!

The capris were definitely the last summery thing I’ll be making these year. My mind is all full of coats (a black bouclé Clare coat will be on the horizon!), flannel fabric, warm knits, fun toppers, and exploring some new things. I may do an inspiration post soon about it! 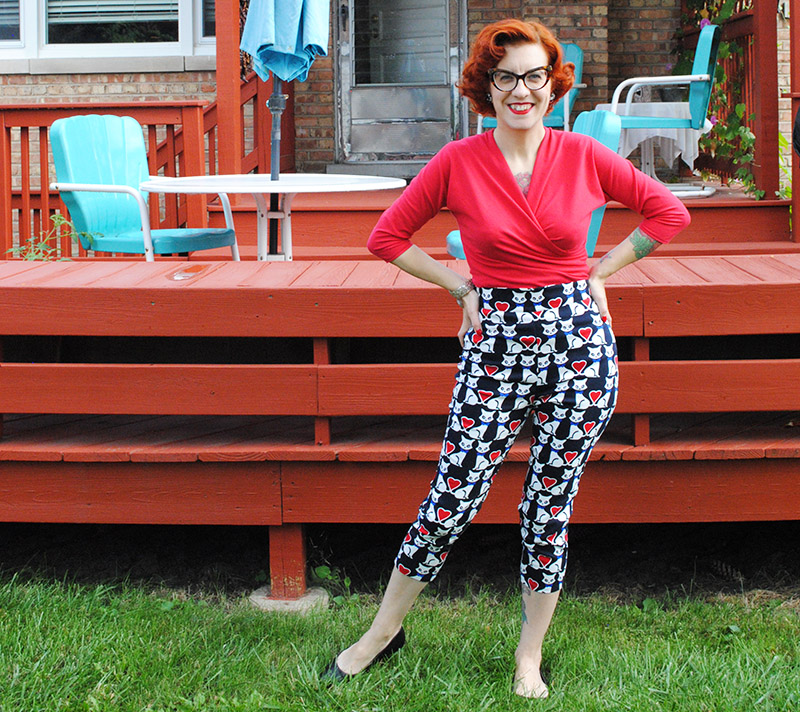 capris – made by me
surplice top – made by me
vintage confetti lucite cuff – antique store in New Mexico
shoes – Dr. Scholl’s Really flats