I have a special treat today! I was very flattered to be contacted by Deer and Doe to see if I wanted to try their latest pattern and give an honest review, and that pattern is the Safran jeans that just came out today!

Grab a beverage for a long post, I always get chatty when talking about jeans! 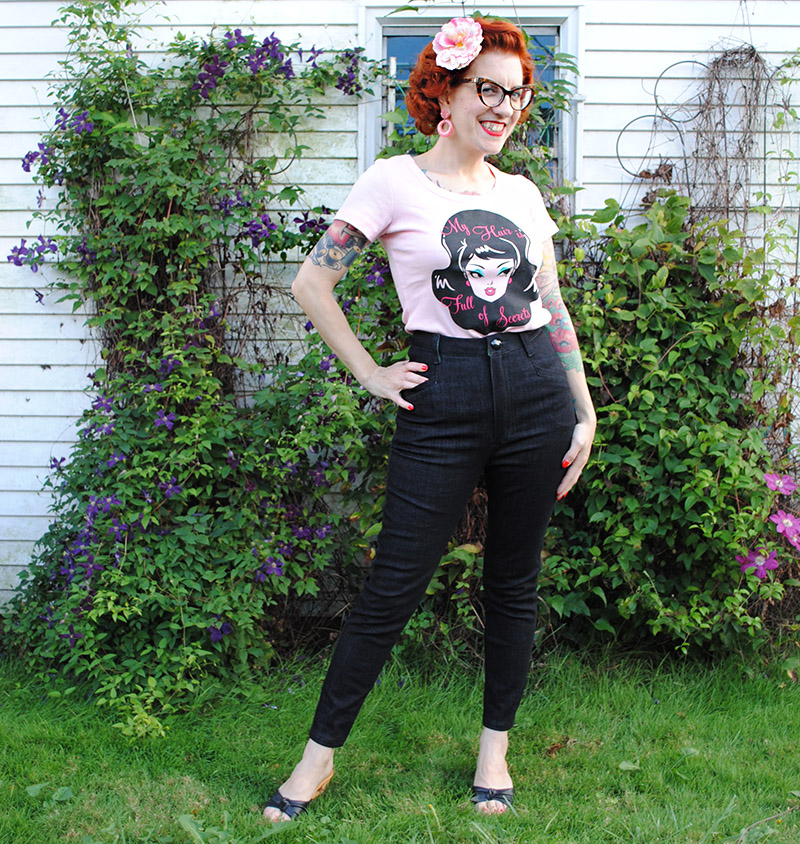 Now I’ve known about Deer and Doe but hadn’t sewed any of their patterns to date, because their general aesthetic is not usually my thing. But this was different. They knew that a high-waisted, narrow leg jean might intrigue my retro sensibilities, and they were right! One cover drawing and a butt photo and I was in. 😉

At first I couldn’t decide how I wanted to sew these. Like jeans? Like pants? Because the pattern is billed as both. They have a cool feature, with a welt in the front pocket, and that gives them a bit of a different look than typical jeans. A bit fancier, kind of. With blue denim and gold topstitching I think they could have a fun kind of Western look, and I bet they’d be really cute in a non-denim fabric, like a cotton sateen. 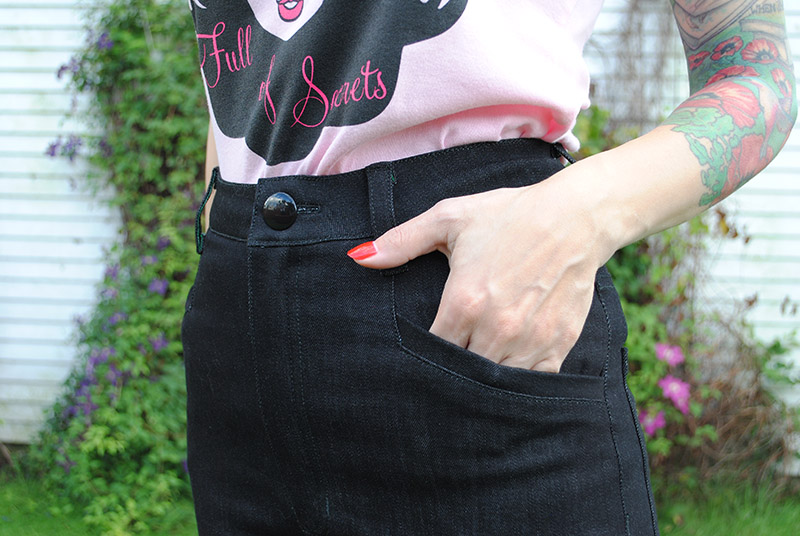 I decided I wanted them as jeans. But I had no clue if the fit would work on me of course, so I didn’t want to bust out really good denim, instead using some random black stretch denim in my stash that was decent enough fabric for a first pass. And I’m really, really happy with the finished jeans!

I went with black-on-black topstitching (and bar tacks) and while it’s somewhat freeing not worrying about all that contrast topstitching (I couldn’t even see a skipped stitch if I tried), there’s something a bit disheartening about spending so much time on something that you can’t even see. 🙂 But hey, I know it offers much-needed strength for jeans, so I’m glad I took the time to do it. I’d really like to try a pair of jeans with a unique contrasting color topstitching soon (turquoise? red? green? orange?). 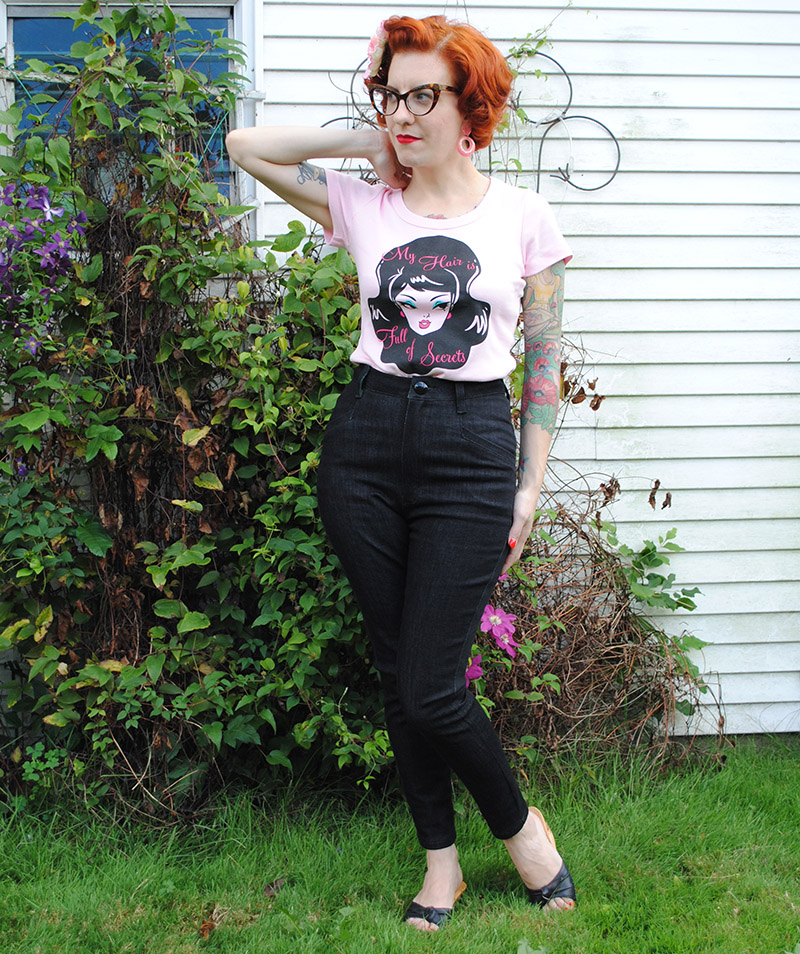 I only thought I had a copper jean button at the time I sewed these which didn’t jive with my sense of matchy matchy, so I went with the black plastic shank button you see in these photos. But I hated how cheap it felt opening and closing it, and then a day later discovered an antique brass jean button lurking around. So I swapped it out and am happier, but the swap didn’t happen until after photos.

I cut a 38 and graded to a 36 in the legs 3″ down from the crotch curve, knowing I might need to take the waist in. Which I did. When I basted it together the back was gaping badly, so I cut a 1″ wedge out of the center back seam, tapering to nothing around my mid hip. In the end I also took the legs in another 1/2″ total in the thighs down to 1″ total in the lower calves, and I think it’s resulted in the best fitting/feeling legs I’ve sewn on jeans to date!

Overall that probably means I could have sewed a 36 waist/34 leg, and you can see the pattern doesn’t fit as skintight as it does on the Deer and Doe women, but I like how they fit me and they’re super comfy. 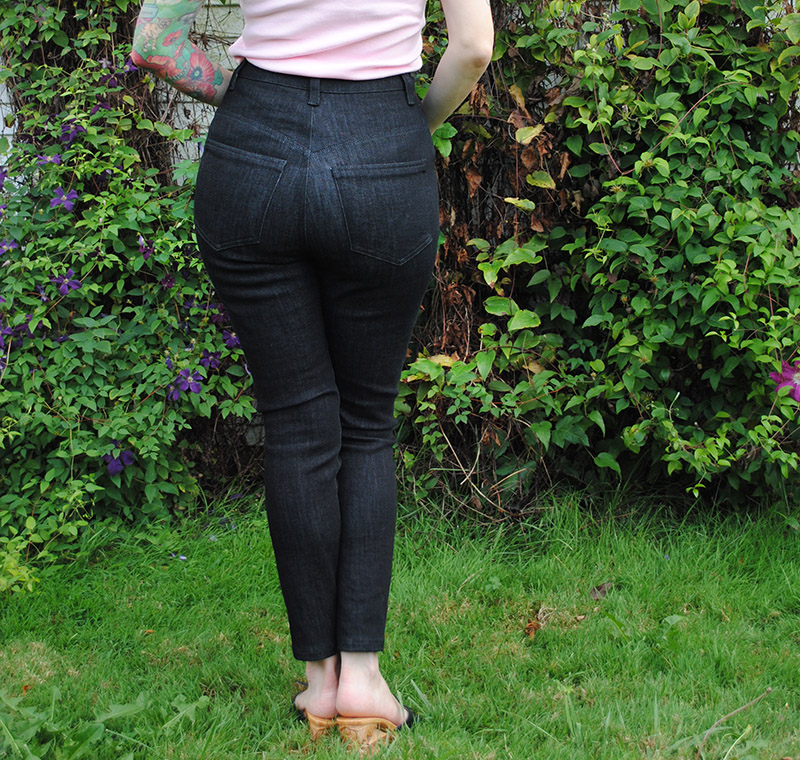 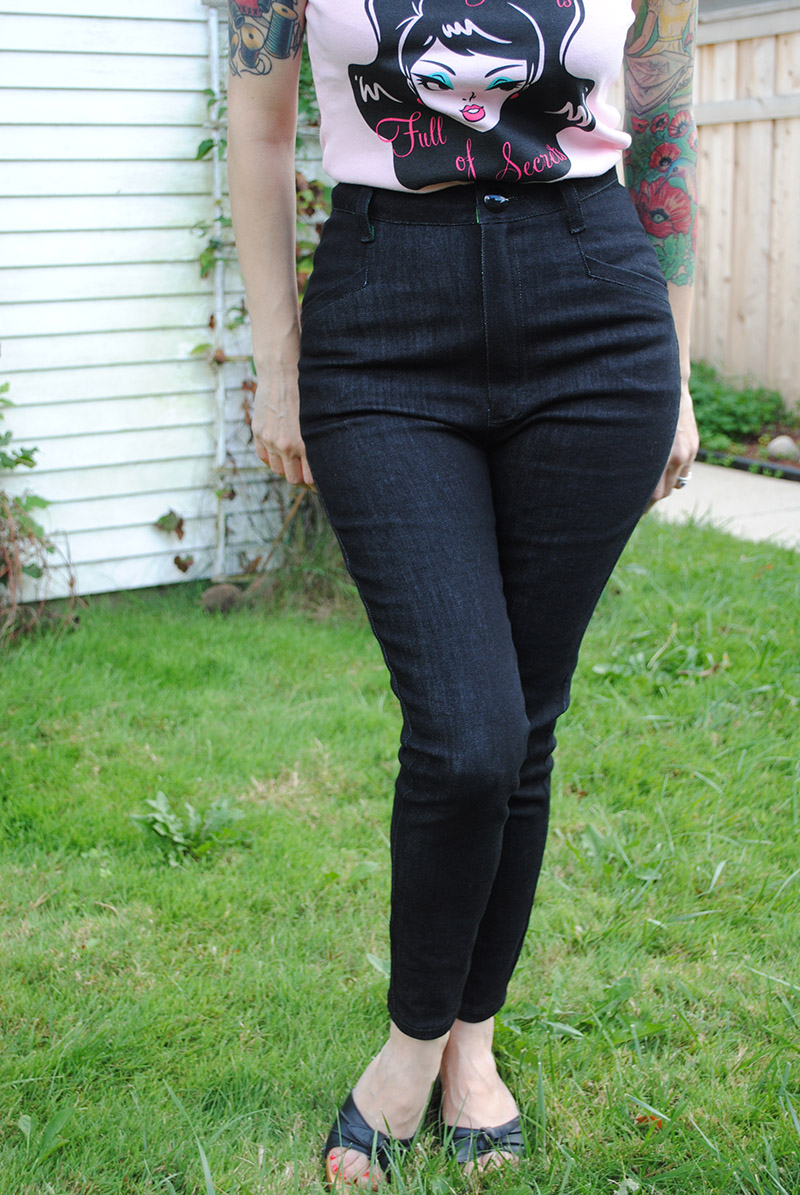 I did make one design alteration, ugh, I can’t help myself! In part because I wanted every opportunity to tweak the fit if I turned out to have any horizontal fabric pooling issues or something. To do that, I basically just drew the curve I wanted onto the back leg piece, cut it along that line, and added a seam allowance to the back leg and to the new yoke piece. I love how the shape turned out! I might make it even more heart-shaped next time. Not bad for just basically pulling it out of my head! 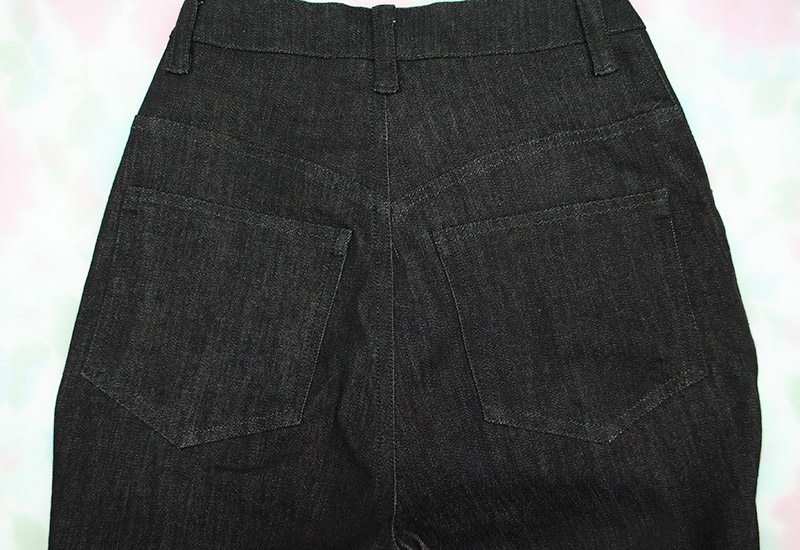 And speaking of the back, the waistband dips down a bit on me, but it’s just about THE only pair of high-waisted, slim fit pants I’ve had that didn’t result in a pool of fabric at my lower back after several wearings (even pants that are perfect when finished eventually do this). So I may add about 1/8″ – 1/4″ to the center back of the back leg, but that’s it. I think it’s partially because these sit at my natural waist, but at the lower part of the narrowest bit, not the higher part, if that makes any sense. I think that means I may even lower the rise on my Gingers and Butterick B5895s (my two standby pants patterns at this point) by 1/4″ or so in the future and see if I end up with the same long-term result, or maybe it’s just some Safran magic. Regardless, the center back looks just as flat after wearing these a handful of times as it did in these photos. Woop! (The bump you see on the left yoke is just my shirt.) 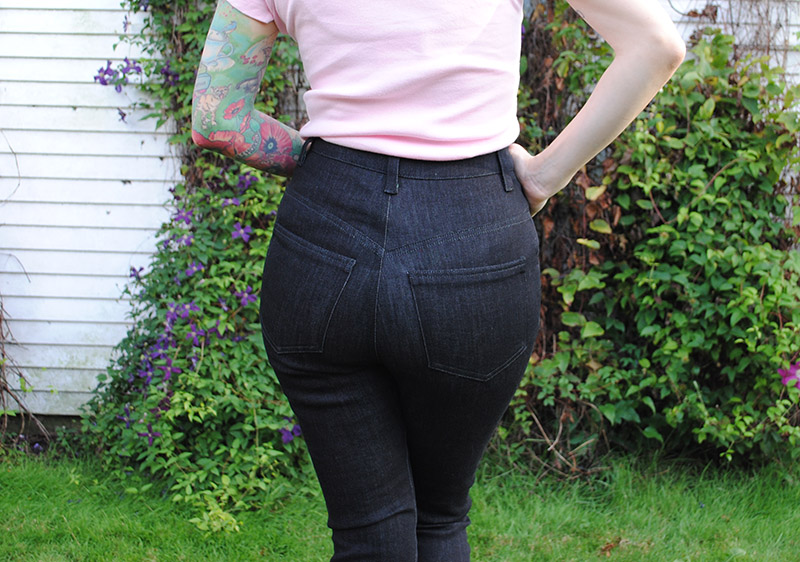 I added 3/4″ to the rise of Safran (front leg, back leg, fly shield), and that hits me just at the bottom of my natural waist, as I said. I’ve learned that while I’m short waisted on the upper half of my torso, my lower half makes up for it, so it takes more length in the crotch/rise for most (not all) patterns to get to my natural waist, even if they’re high-waisted patterns.

So speaking of adjustments, here’s what I did…

Adjustments I made to the pattern pieces, before I started:

Adjustments I made on the fly while sewing and basting:

The thing I’d like to change for future versions is the shape of the front waist of the pattern. It dips down a lot lower in the front. You can see this on me, and also if you look at the pattern piece itself. 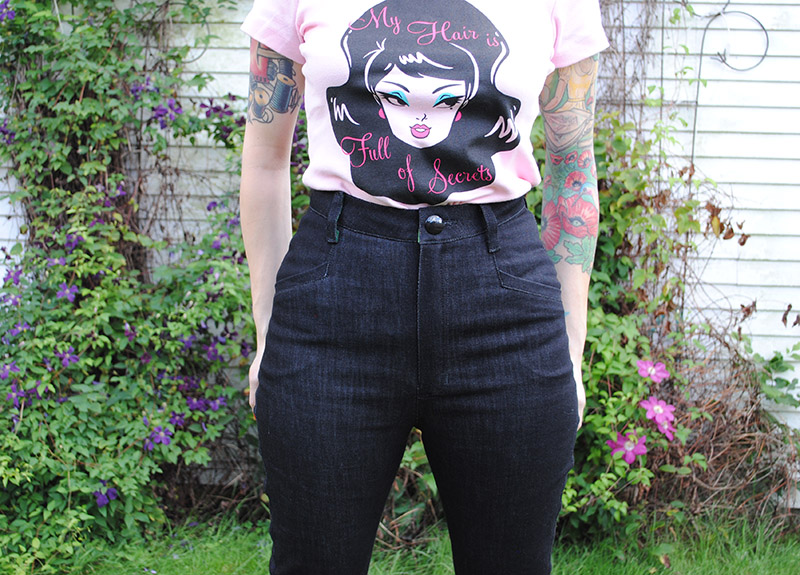 That is obviously by design, but I prefer it a little more straight across. Seems like an easy fix. The waistband piece is also very curved, which isn’t a problem, but because so much of it is on the bias, it makes it a bit difficult to handle without things wanting to stretch out. Between that and the un-interfaced (except belt loop areas) quilting cotton waistband facing I did, it doesn’t keep its shape quite as well as I’d like and gets a bit bunchy in spots (but, this could also be partially due to the denim… you never quite know what the culprit is when sewing with stretchy wovens). Next time I’d probably either use a less curved waistband, or interface the facing entirely. That being said, I still like using a non-stretch for the inner waistband because I can’t stand waistbands stretching out, and this one doesn’t stretch out. So I would only use stretch denim as a waistband facing if I interfaced it with a non-stretch interfacing. Yeah… I’m really specific about my waistbands, I admit! 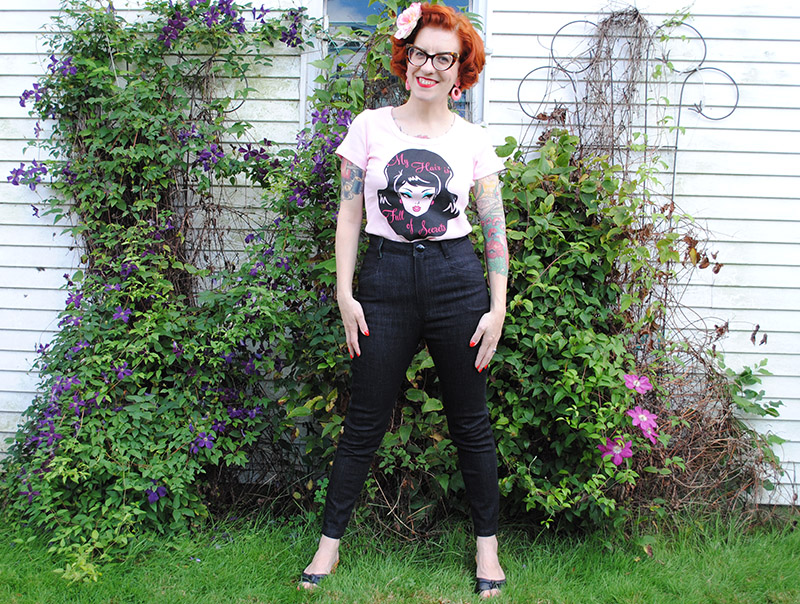 How about the pattern itself? It’s detailed but not super hand-holding, so keep that in mind. I’m happy I’d sewn a couple of full-fledged pair of jeans first (meaning all the hallmarks of traditional jeans—coin pocket, miles of contrast topstitching, hardware, etc.). That made me a lot more comfortable with the Safran pattern for sure, although I’m sure I could have tackled it even if I hadn’t, so doesn’t let that put you off! (Plus, they plan to do a bunch of Safran posts on the Deer and Doe blog in September.) I think of this pattern as kind of “jeans light”. I kicked it up a notch by adding more of the traditional elements with topstitching the inseam, topstitching and a bar tack to anchor the pocket bags on the side seams, and bar tacks to secure the belt loops… again, not that you can see any of that, it being black-on-black. 😉

I specifically deviated from the pattern in two major places: the fly and the waistband. I’ve found over the years that I personally get much nicer results with zippers of any kind if the seam allowance is basted first, so the Ginger fly instructions are a winner for me as it’s approached in that matter. Your mileage may vary, and the Safran fly instructions are certainly detailed. That’s just my personal preference.

I didn’t like that Safran had you attach the belt loops to the waistband before sewing the band on, which seemed more complicated than it was worth. You have to break your topstitching on the waistband to get around them, which I was never going to do in all honesty. So I sewed the waistband on, then topstitched all around the entire band, then sewed on the belt loops. Also, personal preference. (Typically, if I find a method of construction I prefer, I don’t deviate, even if the pattern says otherwise.)

I think the only thing I’ll change in future pairs is to make the front and back waist less curved and to add a smidge more room at the front hip to prevent the pocket pulling in the corner. But really, that’s it! I’ve never sewn a welt before, and I think it’s a unique look for the front. I’d like to make a pair with contrast topstitching to emphasize that.

Overall I’m really pleased with my Safran jeans and I’ll definitely make another pair in the future. I’m thrilled to have another pants/jeans pattern I’m happy with as well, as lately that’s all I’ve been wanting to wear and sew!

You can purchase the Safran pattern here, and read more about it on the Deer and Doe blog. I can’t wait to start seeing them pop up around the web, for more inspiration, too! 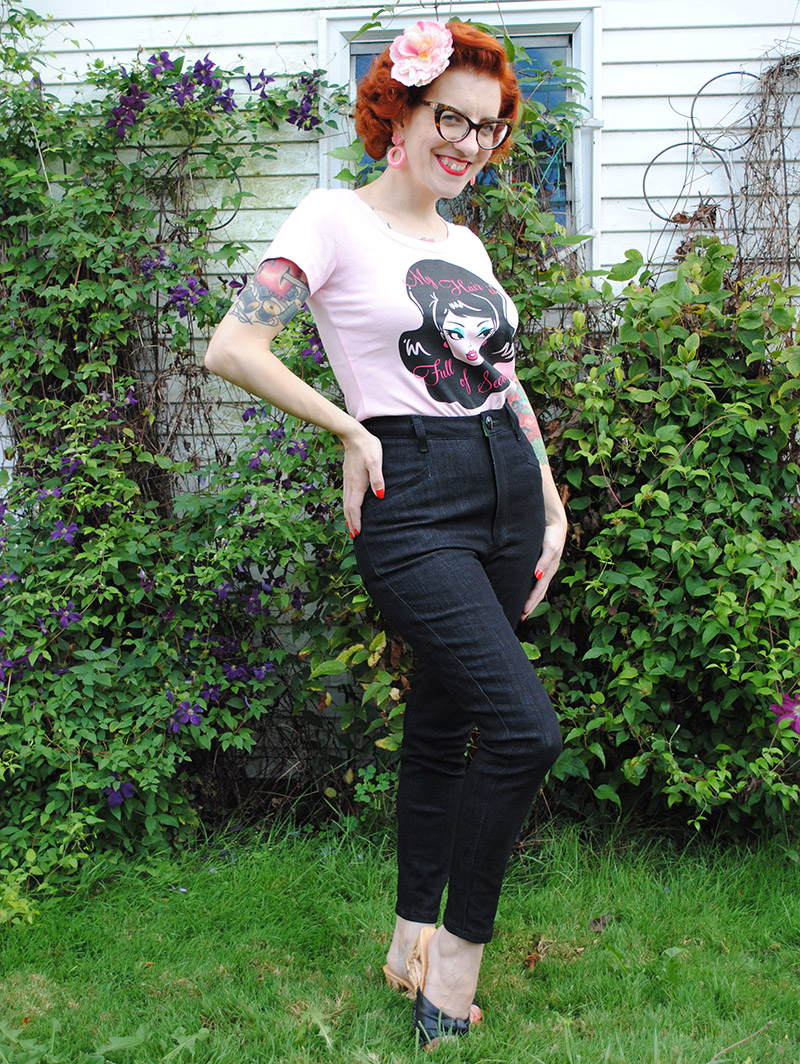 Safran jeans – made by me (new pattern here)
t-shirt – Doll Me Up
shoes – Lucky Lou
earrings – made by me
glasses (new!) – Bonlook