Cross a major goal off my list this year: sewing with knits! 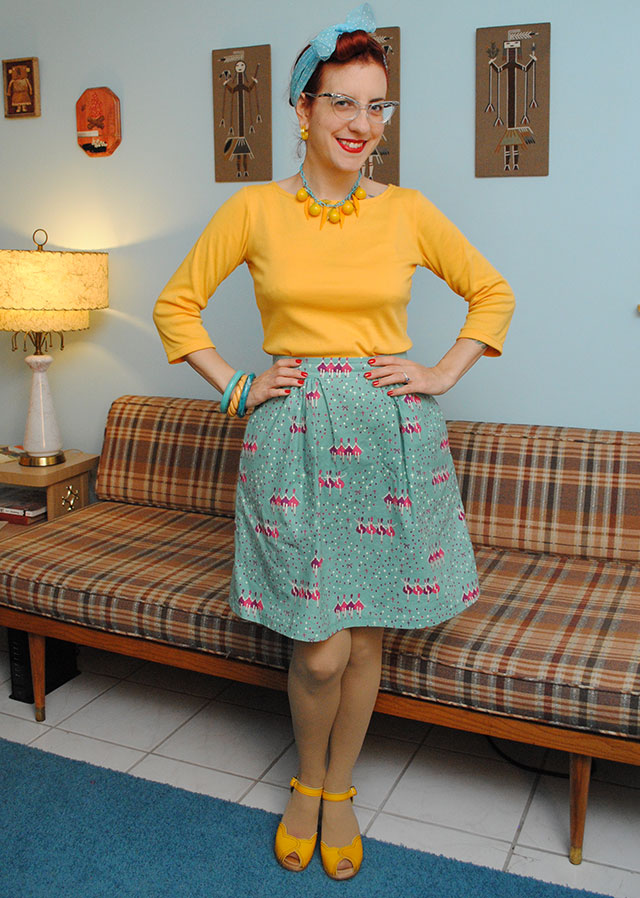 Meet my very first Coco top, from Tilly and the Buttons. I’m excited. Can you tell?? 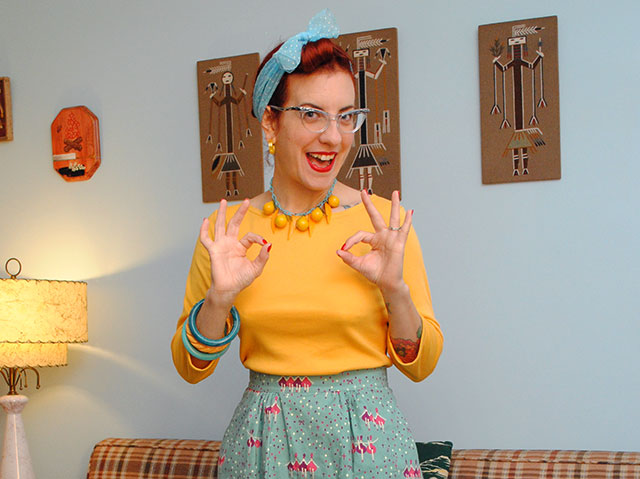 When I set a goal earlier this fall to learn to sew with knits, I prepared by, well, reading everything under the sun about sewing with knits. The Colette Guide to Sewing Knits by Alyson Clair, the instructions for the three knit patterns I bought to start off (Coco, Lady Skater, Moneta). Every tutorial and post I could find online. You name it, I researched it. I didn’t want to be scared when I tried it for the first time, and I wanted to be armed with as much info as I could find. And I was damn prepared, if I do say so myself. I’m so glad I was, too, because when it came time to actually sewing, it really was nowhere near as bad as I expected!

I started with a medium-weight jersey (I think interlock? I’m still learning—it’s the same on both sides) in a bright, sunny yellow. You know I love me some yellow, and I knew a yellow tee would get a ton of wear. It wasn’t as non-stretchy as the pattern called for, but I figured it would work well. 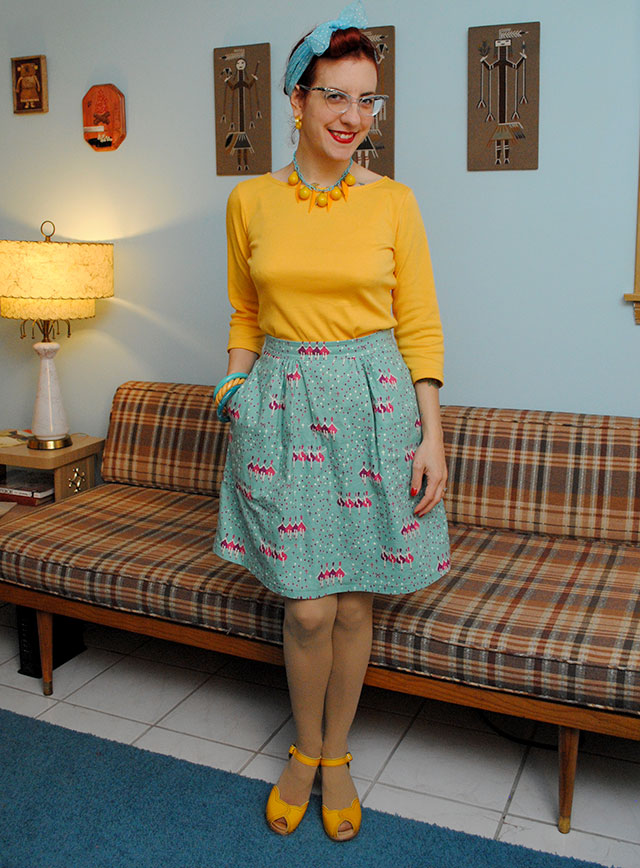 I cut a straight size 1 with no changes, since I wanted it fairly fitted (my measurements would otherwise have called for a 2). I sewed the side seams shut at the bottom (after cutting 1″ off the length), instead of the little split because, well, I forgot.

Not that I’d likely wear it untucked over a skirt like this, but it gives you an idea of the full silhouette. Really, the fit is exactly spot on to what I wanted! I think if I were going to do the dress, I’d go up to a size 2 so it wouldn’t be too fitted. 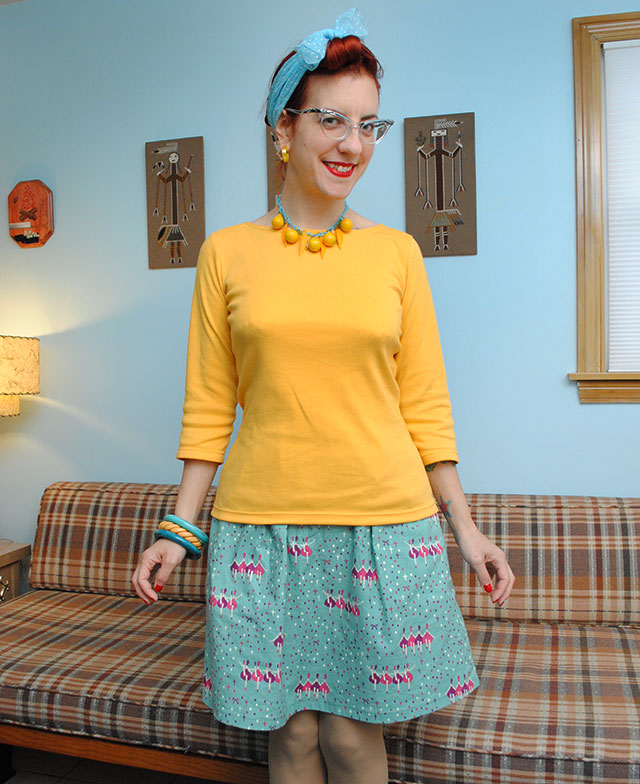 I sewed the entire top except the hems on my serger, which was new for me (and a wee bit frightening, sewing a seam and cutting at the same time). I used a twin needle for the hems after serging the raw edges. The nice thing about serging first is that between that and the twin needle zig zaggy bobbin thread, it kind of all hides a few spots where I wasn’t exceptionally even with pressing the hem up before sewing, so it looks pretty professional!

I should clarify that the pattern doesn’t require a twin needle or a serger, but I took it on as an added challenge. You can definitely sew the entire top on a regular machine with a zig zag stitch, and Tilly meticulously walks you through all the steps in the pattern. 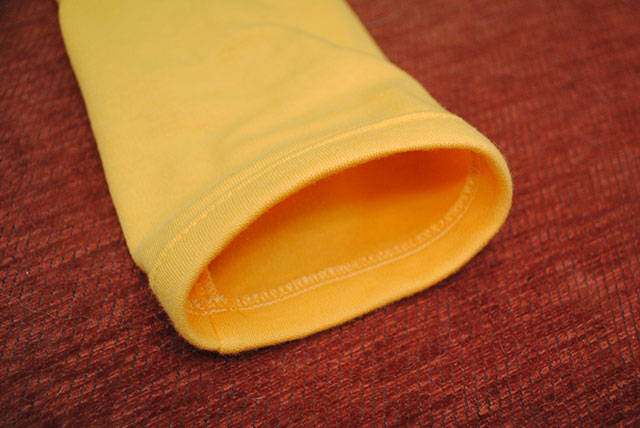 I used Wonder Tape on the hems just like a ton of people say to do, and let me tell you, it’s the stuff of the sewing gods! It meant I didn’t have to fuss with pins when hemming, which was great. And with a walking foot (new purchase for sewing with knits), I had no stretching or distorting of the fabric. Yay! A bit of tunneling (worse on the neckline, which I did first), but not bad at all, I don’t think. And way better than my samples without Wonder Tape. 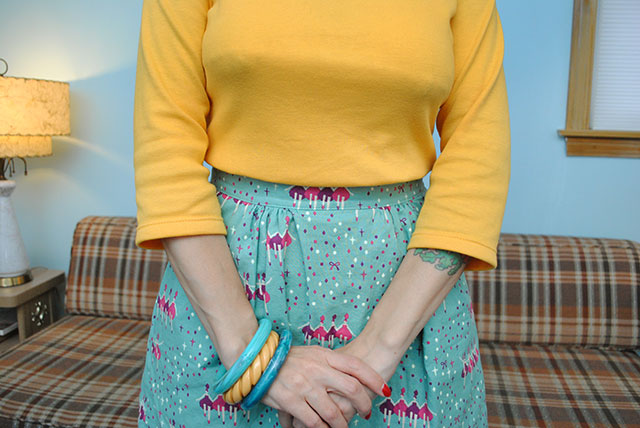 The only thing I’m not sure about is I don’t feel the hems are particularly stretchy, but I think that’s because this hasn’t been washed yet and so the Wonder Tape hasn’t dissolved.

Well actually, there’s one more thing I’m not sure about! I had a really hard time getting the tension right for the twin needle. I know the bobbin is supposed to zig zag between the needles, but I had to ratchet up the tension way higher than normal before it stopped being a straight line (from 3 to 7, out of a possible 9). And even then, I could still tug the bobbin thread out if I tried to. I did that on a few samples and was worried. But all sewn in a tube with the ends secured it’s not an issue. So is that just the way a twin needle works? Is the bobbin thread kind of loose like that since it has to stretch and give? I can’t find anywhere that addresses it, but I just had my machine serviced and it otherwise seems to be in working order. So I might just be paranoid about it. 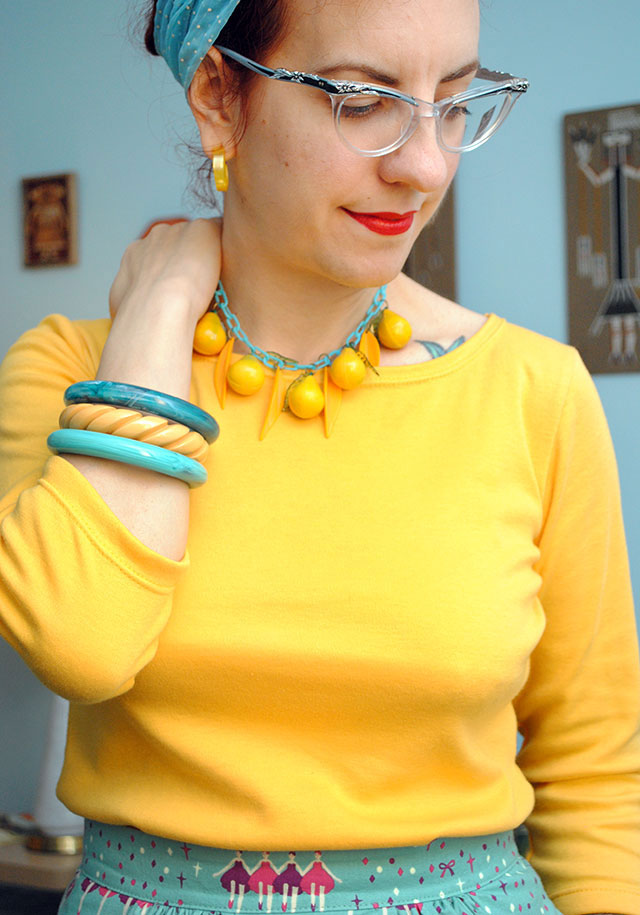 Anyway, I’m over the moon about my Coco! I paired it with a skirt I just finished up last week (which I should have ironed first, whoops), using a delightful Japanese cotton featuring Can-Can dancers. Because, why not! 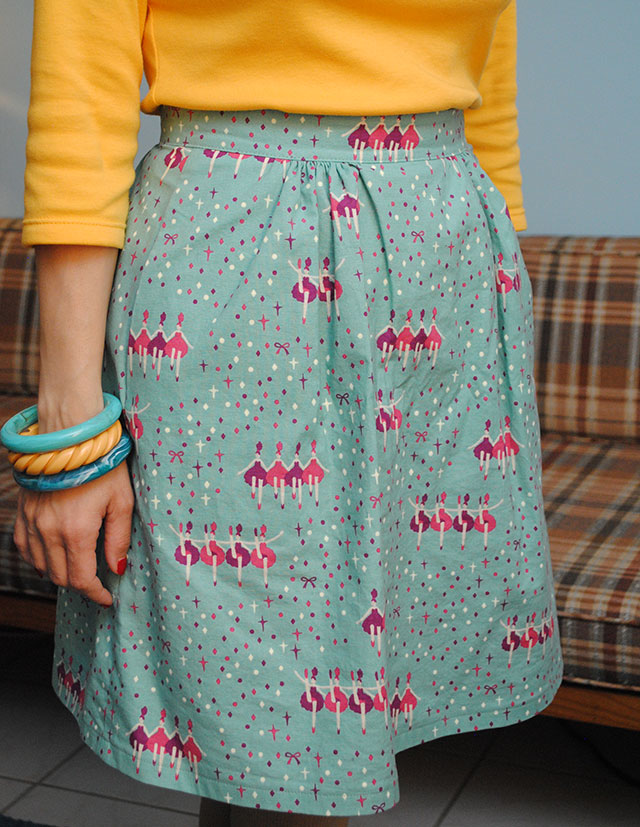 This is actually the skirt from my Singin’ in the Rain dress (and various others at this point, it’s one of my favorites), with a waistband to make it a skirt with a center back zip and pockets. I really wanted a nice a-line basic, but did a muslin of both Tilly’s Delphine skirt from her book and the Colette Ginger skirt, neither of which were working for me, for various pear-shaped-related reasons which I’ll work through in future muslins. But damnit, I really wanted a skirt ASAP, so I popped this out instead. And I’m actually pretty thrilled with the results! I even dared to go above the knee! 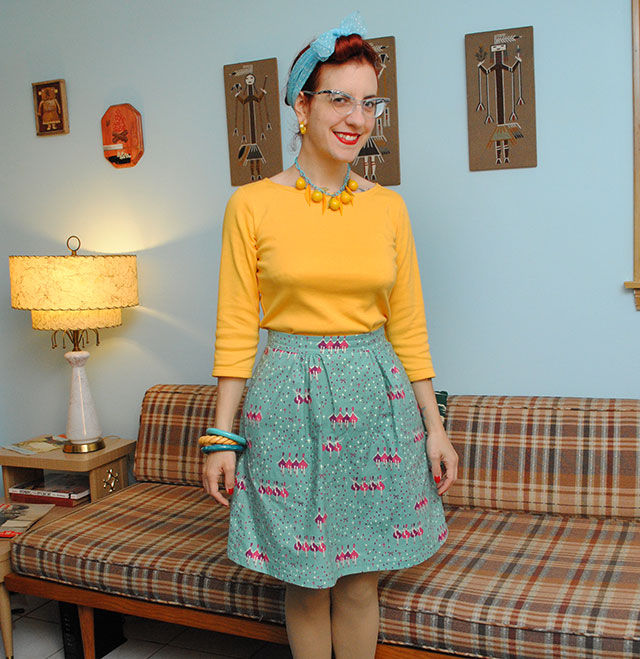 And by the way, I hear some of you saying, “Didn’t you just tell us you weren’t going to wear shorter skirts without tights?” Wellll I’m technically wearing tights! But yeah, in principal, you got me there. I tried it on with black tights and didn’t love it, so I went with these nude ribbed ones (wish I remember where I got them). And the skirt isn’t so short that I feel weird without dark legs. 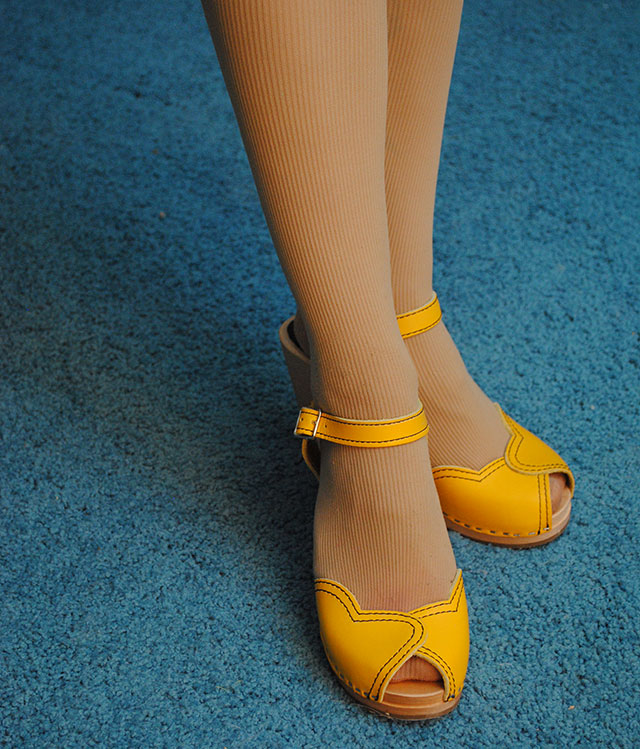 I quite love the shape of the skirt above the knee, actually! It hits a nice balance between gathered skirt and a-line. I mean obviously, since it’s both. Whatever, I’m excited and overstating the obvious. You get the idea. 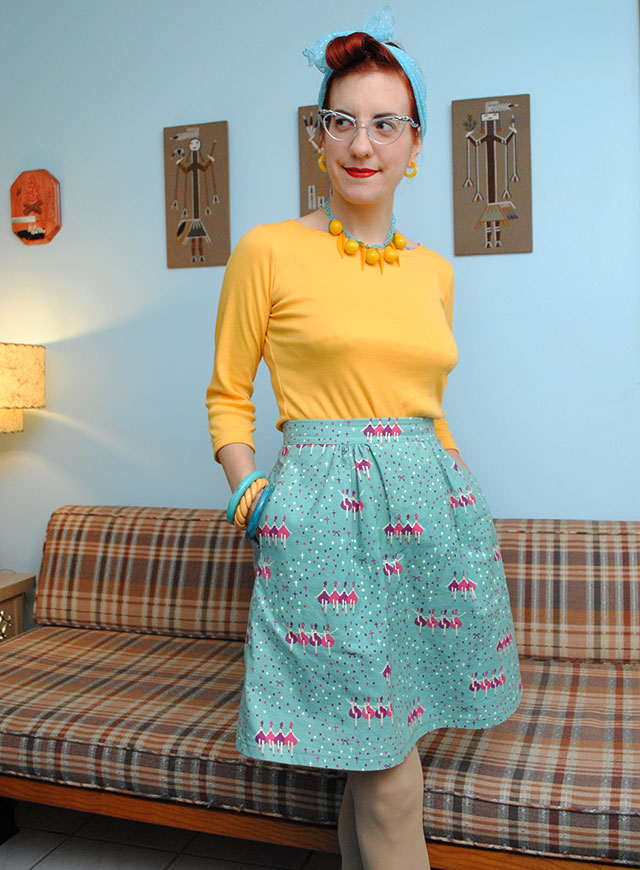 I’m totally going to sew this skirt again, and may even do a scalloped hem version! And I’m going to sew Coco again. And again and again. In fact, don’t be surprised if you see this exact outfit repeated in different colors and patterns for the next several months (soon with added winter-appropriate wooly layers thrown into the mix).

And one more cheer for Coco: it really was easy to put together, even for a newbie to knit fabric. I love the shape, and couldn’t be happier about it. There’s a reason so many people have sewn this pattern! I’m delighted, and happy to have my first knit sewing project behind me. And a successful one, at that.

Maybe it’s just a basic yellow tee, but it means so much more than that to me! 🙂 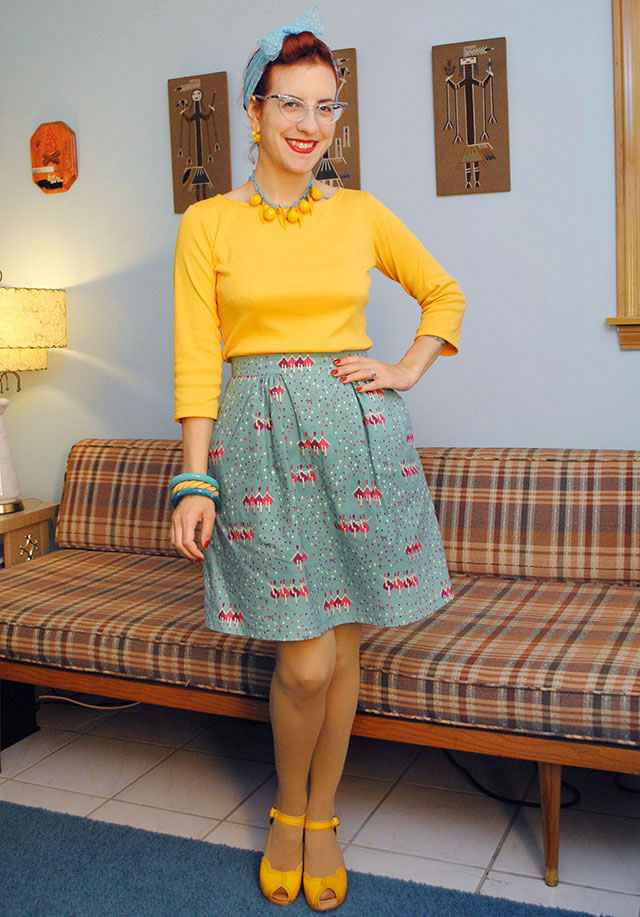