Today is day two of my nail care mini series. Hoorah! I’m going to talk a little bit about why I love using gel nail polish. For the vintage gal who loves to look polished but don’t want to fuss with her nails several times a week, gel nail polish is for you!

I converted to using gel nail polish a couple of years ago. I seriously haven’t looked back since! It’s been kind of my little nail miracle for my previously short, stubby, and troublesome nails (which I talked about in my series intro post). Basically, its big claim to fame is long-lasting polish without having to get acrylic nails at a salon. There are many brands available so there’s lots of options, which I’ll talk more about this week.

So why do I love using gel nail polish so much??

Actually, instantaneous! This is one of THE best things about gel polish. You cure each coat under a little LED lamp for 30 seconds (which I’ll talk about that more in tomorrow’s post). There are alsoUV lamps as well which take a little longer to cure, although I get the impression LED is the new direction and more and more polishes say for UV and LED lamps, which is great.

When you paint your nails with a gel polish, there’s no waiting around, no dents in your nail polish 10 minutes later, no impressions from your sheets the next time you sleep. When you’re done, they are 100% dry. End of story. Go eat a hamburger or go knit. Amazing.

I love for my nails to look great, but I don’t love having to think about them a lot. Gel polish can last up to about two weeks! And not like some regular nail polish that claims it won’t chip for a week–I’ve never ever found that to be true. But gel polish, yes, it really does last! This is pretty awesome when you’re used to having to paint your nails every few days!

Mine usually lasts 10-14 days, although I most recently had it on for 16 days. My nails grow quickly, so the regrowth shows pretty soon, and sometimes it’s enough to bug me before the polish even starts to look a little tired at the tips or edges. 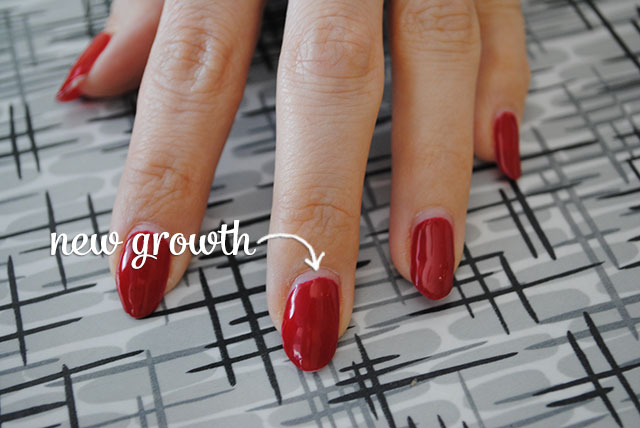 And what do I mean about it looking tired? They say gel polish doesn’t chip, but that’s not really true. Yes, under most circumstances the polish won’t chip for quite some time, but by about day 10 you might start to see it peeling off (aka lifting) a bit at the tip of one or two nails, or at the side edge. For me, it’s often on the fingers I use the most: my pointer and middle finger, or my thumb.

Although in the photo below, I managed to chip my thumb nail somehow. Normally I would just paint back over this if I wasn’t ready to change my polish (which you can do quite easily), but I wanted to show you that it can happen.

(It’s worth noting that the shorter my nails are, the less likely this is to happen.) 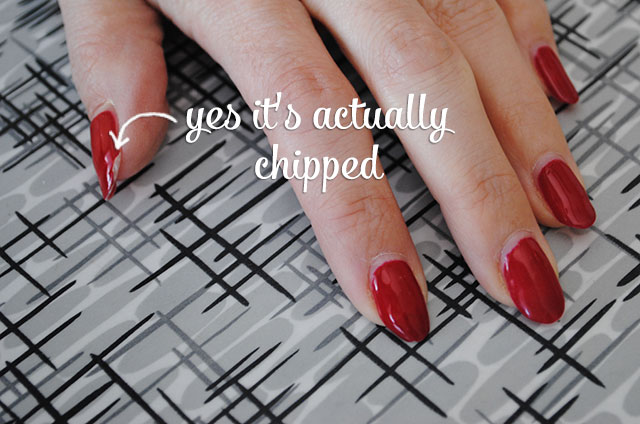 Gel nail polish is thicker than normal nail polish, and when you’re using a base coat, a top coat and 2-3 coats of color (I often do 3 since I like my colors really opaque), that’s a lot of polish. It really makes for quite strong nails! This is a huge bonus for women like me who are less than delicate with their hands. It’s almost like a thin layer of plastic on your nails. For me, it holds up to way more than any normal polish ever could. Great news if you use your hands a lot, especially for work!

Now, your nails themselves aren’t really that much stronger, it’s the thick gel polish that’s almost like a lacquer coating the surface, acting like a protective barrier. Normal nail polish does add a little bit of durability to your nails, but with gel polish it’s a lot more noticeable. Those thick layers of polish really makes for a huge difference in the day-to-day feel of your nails and how they’re protected. Before I switched to gel polish, my nails were pretty easily bent once they’d get a free edge, and now that’s not the case! They’re not impossible to break by any means (and I have… I did the other day), but the difference is dramatic. Dramatic enough that I can actually allow my nails to grow, and they don’t break or crack in the corners, with the gel polish protecting them. The difference is astounding. 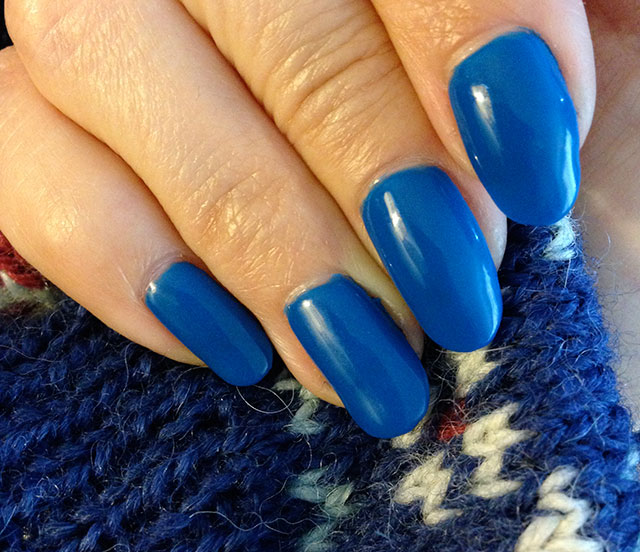 And let’s do a before and after like yesterday, just to show you the worst case of how my nails used to look. The photo on the below left is terrible since you can barely see my nails (I had a hard time even finding a photo like this since I was obviously doing my best to not have my nails looking their crummiest on camera). But I think you can see enough to get an eyeful of the difference..!

I could never, ever have worn my nails like the photo on the right prior to using gel polish. Not once in my life were my natural nails ever this long before. Literally not one single time. This may not be long for some, but it’s an astounding difference to someone who was used to often having little kid nails!

I mentioned in my intro post that my nails naturally aren’t that strong. They peel and break easily, which is why I could never grow them to any length whatsoever. But from years of biting them, a few of them had uneven ridges or little kinds of hills and valleys and just were otherwise not always perfectly smooth. They were always just a little bit raggedy and dodgy looking.

However, now? Most of that has smoothed out over time, and of course I’m able to wear them longer as you’ve seen. Honestly, they don’t even seem like the same nails as before I used gel polish! 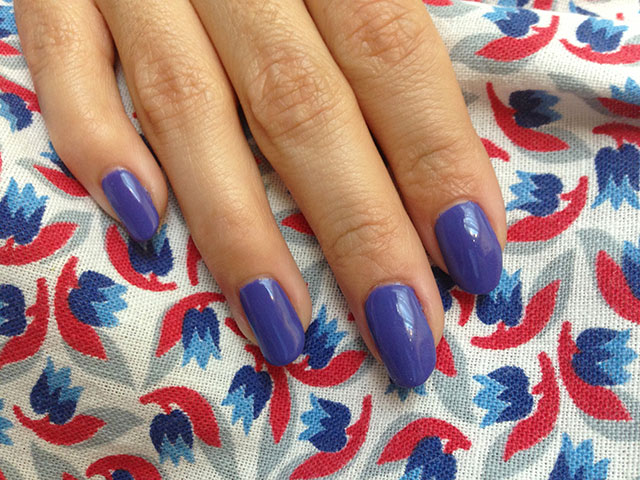 Gelish polish in He Loves Me, Le Loves Me Not

Of course, if you’re planning to wear polish basically all the time, you’ll always want to make sure to keep an eye on your nails between polish to make sure you haven’t developed a fungal infection, because that’s certainly not happy. It’s something that can happen on toes or hands alike with any kind of polish or lack thereof… I’ve fortunately never had an issue with this at any point in my life. That’s one of the reasons that I prefer to to my own nails versus going to a salon, because I’m paying very close attention to my nails.

I don’t know why, but I think a combination of a glassy finish and self-leveling polish makes nails painted with gel polish look so good! Wouldn’t you agree? 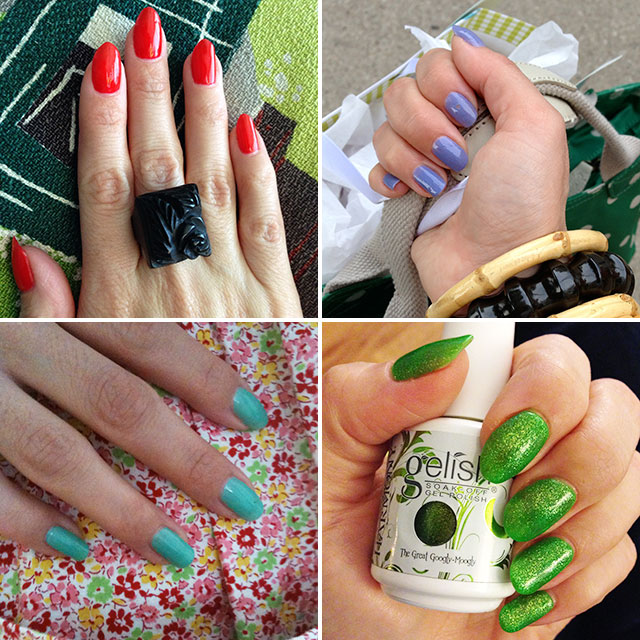 It does take a bit more time and effort to paint your nails with gel polish than normal nail polish, but let that thought fly out of your head. Okay yes, if you only paint your nails once or twice a month then gel nail polish would take you more time to apply and remove. However if you’re a regular nail painter like me, then the amount of time you spend each week currently is probably more than you’d end up spending every 10 days to 2 weeks using gel polish! It may take more time each sitting, but you have to do it way less often!

You also have to be very accurate painting your nails with gel polish, as if you get any on your skin (and I mean ANY), it will cure solid with the lamp. So if you have some polish going from your nail to your skin it’ll make a hard little bit that will likely lift off and peel. Good news #1: I find it much easier to be accurate with gel polish (I accidentally confirmed this looking back at some of the less-than-stellar ways my nails were painted beforehand, ha ha). Good news #2: If you do get polish on your skin, simply wipe it off with an orange stick or cotton swab before you cure! No big deal.

And some people say that your nails peel more easily with gel polish. Since my nails were already prone to that when they had any length to them, it’s hard for me to compare. On occasion I do get a bit of peeling at the edges of the nails on the fingers I use the most (only my thumb, fore finger and middle finger ever, and that’s when my nails start to get quite long. So it’s usually a sign that it’s time for me to give them a bit of a spa day. It’s really nothing that’s every been a problem for me, and I’ve been using gel polish for around 2 years or so. Though everyone’s nails are different, of course, so your mileage may vary. But later in the week I’ll talk about my daily nail care routine that helps the overall health and happiness of my hands and nails!

Tomorrow I’ll show you what it’s like to apply and remove gel polish so you’ll really know what the routine is like, and give you some tips and tricks I’ve learned along the way from doing it for so long!