Hi everyone! Today I’m going to start off my posts for those of you who are knitting my Victory pattern as part of the Knit for Victory knit-along.

What to know before you start 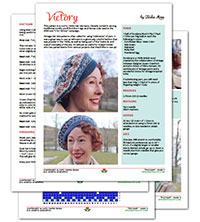 Victory is a fair isle pattern knit in the round, using 2 colors of yarn in many rows. As I’ve mentioned before, I’m gearing my posts for those relatively new to stranded / fair isle knitting, but not for those new to knitting. I’ll touch on some topics like:

I hope that if you’ve ever been interested in knitting fair isle projects but were intimidated, and you want to start with something small, that this part of the knit-along will help give you a bit of hand-holding along the way to increase your confidence. It’s something that looks more difficult than it is. Once you get the hang of it, the sky’s the limit. You’ll get there!

Don’t forget to join our our Ravelry group (over 100 members and I only created it a few days ago!) and our Flickr group to connect with your fellow knit-along friends along the way!

What yarn are you going to use?

Why? When you’re just starting off knitting with two colors at a time, it can be helpful to use a yarn that wants to ‘grab’ its neighboring stitches a little bit. Traditionally, stranded patterns were knit with yarn that did just that. It helps keep your stitches even, it helps the floats (strands of yarn between colors at the back of your work) kind of become one with the knitted fabric, and it’s a necessity for unsecured steeks (knitting that’s cut at openings but where the edges aren’t secured with crochet, machine or hand stitching… don’t worry, there’s none of that in Victory!). You may even find a stickier wool blocks better in stranded designs.

Take a look at the strands of these two Shetland wools: 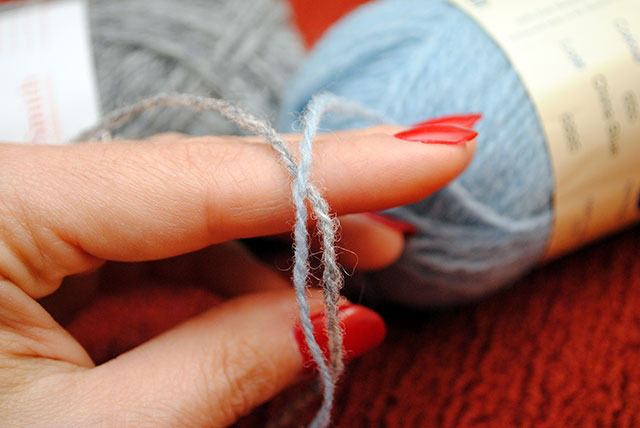 Wooly wools and stranded knitting were made for one another.

That being said, some of my first stranded projects were in smooth superwash wool! So consider it a recommendation but certainly not a requirement. But if you’ve tried stranded knitting before with smoother yarns and struggled with your tension and finished pieces, it just may help.

If you want to order within the U.S., a few yarns to consider are Harrisville Shetland, KnitPicks Palette, and Quince and Co. Finch.  Jamieson’s Shetland Spindrift and Rauma Finnulgarn can also be purchased in the U.S. Of course there are plenty of others possibilities! These are just a few to get you started.

What if you want to change up the color palette?

I’ll be knitting my own Victory in the original Excelana color palette of the pattern, which uses a deep blue (Cornflower Blue), a somewhat muted red (Ruby Red), a pale green (Nile Green), a pale yellow (Powdered Egg) and natural (Alabaster). Here’s a photo of the yarn from the Victory kit promotion. Aren’t the colors gorgeous? 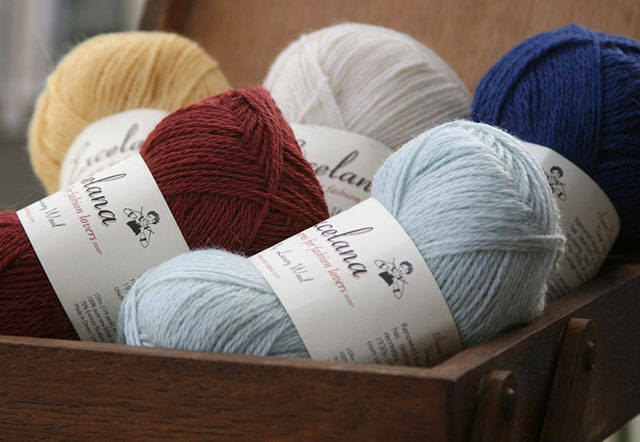 There’s already starting to be examples of great color schemes in finished Victory berets showing up on Ravelry, so look there as a starting point. Ravelry projects are a great place to get color inspiration! For Victory, essentially you need two dark colors and three light colors… or if you want to reverse it completely, two lights and three darks.

If you’re stumped and don’t have any ideas, one thing you can do is take a photo of Victory or a copy of the chart and put it into any picture editing software that allows you to play with things a bit. I love to do this. I use Photoshop, but in the Ravelry group, Ingrid mentioned pixlr.com, which is an online photo editor worth checking out if you don’t have something you like!

Check out what a normal photo of Victory looks like compared to one in black and white and you’ll really see the values. Note that the pale yellow and green used in the band of stars around the outside edge of the beret are very similar… so you could choose to do the same, or give it a bit more contrast. 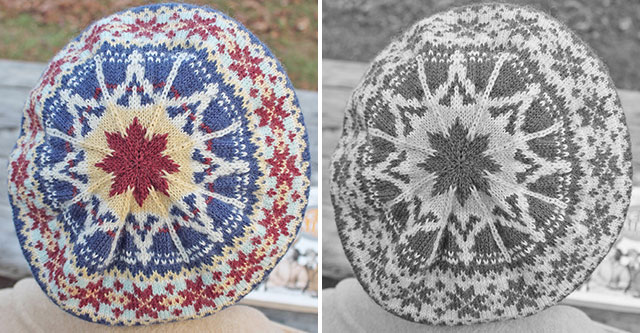 Try playing with the hue or saturation, to get some instant ideas for new color schemes.

(And now I totally want a Victory in green, turquoise, cream and lilac, by the way.) 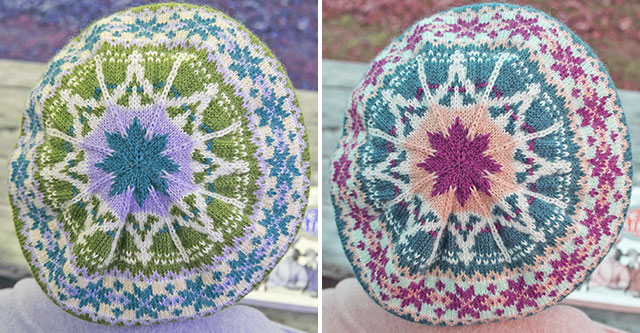 Or amp up the saturation, too. That can really change the intensity of the overall effect. 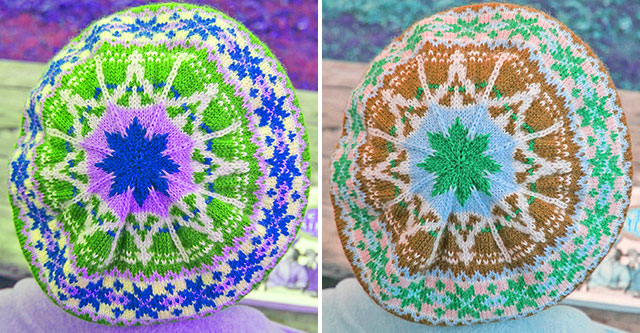 Same if you invert the color palette. Look how vibrant these versions would be! 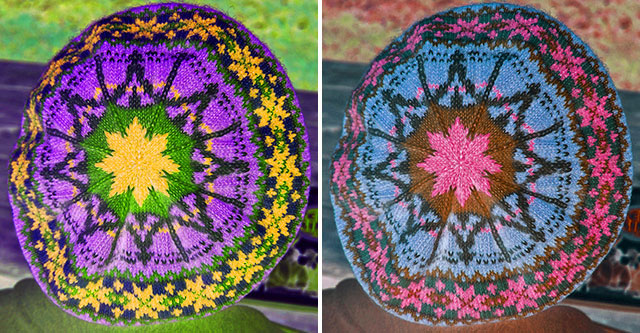 But the low tech way works nicely too! Grab some balls of yarn and see how they look together. Or pull out colored pencils and sketch out what you think you might like. There’s no right or wrong way to decide what color palette you’ll like best. 🙂

When it’s time to start swatching

Once you have the yarn, it’s time to think about swatching. Of course, you’ll need to swatch first so you can make sure to get gauge for the pattern. But if you’re new to stranded knitting, you may already feeling a little stumped. How do you swatch for a project with two colors, in the round? Don’t worry. I’ll talk about it, and you’ll find your swatch will actually be good practice for knitting your hat!

In my next posts, I’m going to first talk through some tips and suggestions on carrying two colors of yarn in a pattern (since you’ll need to know that in order to swatch), and then give you a couple of suggestions on swatching for Victory.