As I mentioned in my last post, while I’m in bathroom-land I’m going to catch you up on some of the things I sewed towards the end of winter and beginning of spring! I think after this post I still have three things (with a possible soon fourth) left to show you, one of which may even result in a mini tutorial when I come back up for air in June after our trip.

What can I say, sewing has really become a big deal for me in so many ways, especially this year. And speaking of which, if you haven’t already you need to go read Rochelle’s beautiful sewing manifesto, especially if you are new to sewing. I just love the online sewing community!

Anyway, today I’m sharing a gray wool skirt and feedsack blouse, both from 1940s patterns I’ve sewn up before. 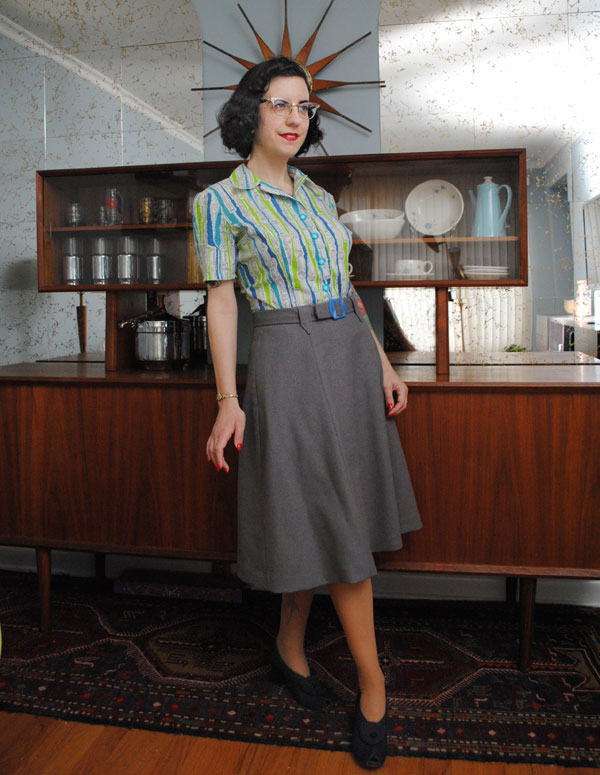 (Oh and hello, welcome to my step-grandmother’s hutch. Remember how I said my mom and step-dad drove it across country a few weeks ago? You’ll be seeing lots more of it, for sure! And yes, I still ‘squee’ every time I look at it, thankyouverymuch.)

I finished this skirt and blouse back in—my goodness, I think the skirt was completed in January and the blouse in February. I actually wore this outfit (along with my Curlicute cardigan) to the Chicagoland Vintage Clothing, Jewelry and Textile Show at the end of February, so Liz and reader Molly and her friend are the only ones who’ve seen it!

In fact I actually bought these shoes at that show. Navy blue heels from the 1940s, and pretty comfy. Swoon! 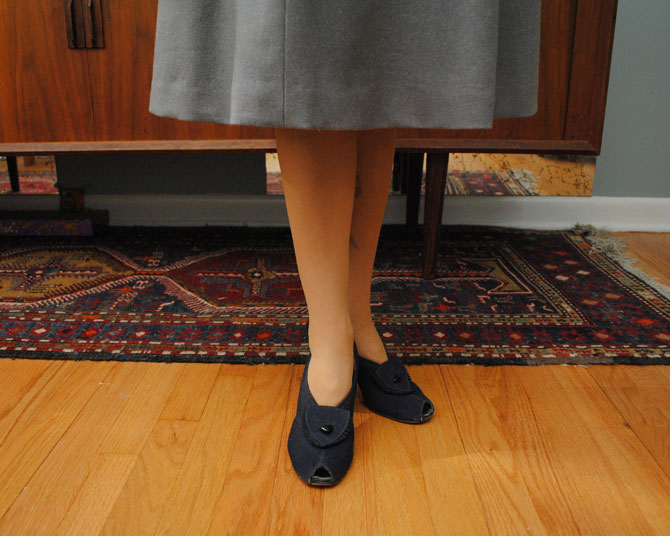 The skirt is a second version of Simplicity 2211 from 1945 (the first was my diamonds skirt), using a nice gray wool, lined with poly lining. I usually don’t bother lining skirts as I wear slips, but I’m starting to come around to the idea of doing it here and there. This was the first one I did before moving to the wonderfulness that is rayon bemberg lining. The skirt is a little big, because I sewed it before discovering I was wrong about my waist size (it was just after this and before my pinafore skirt that it dawned on me), but with the belt I can cinch it in slightly. 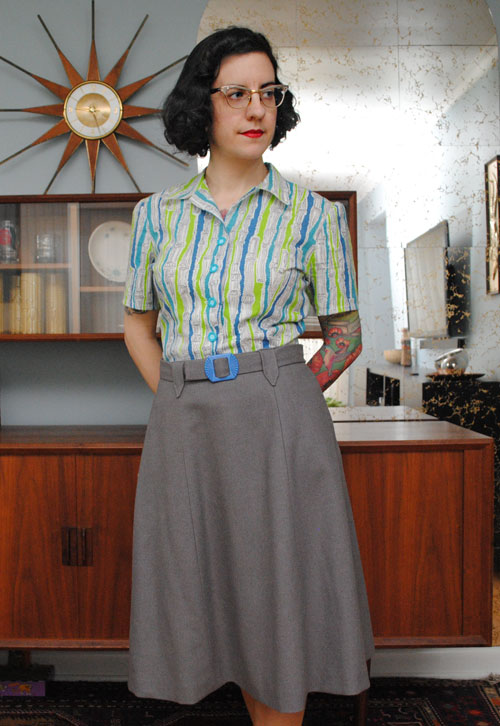 Due to a boneheaded cutting error, I ended up having to piece together the waistband, with a seam strategically placed at the side seam of the skirt. Due to said same boneheaded error, I also had to do that with the belt. But while a seam in a waistband isn’t the end of the world, you really don’t want to see that on a belt! So wide belt carriers were my answer to that. (I’d call them belt loops except they aren’t very loop-like.)

The seam of the belt is hidden exactly behind the back right tab. Pretty sneaky, huh? Boy was there some math to get that just so. 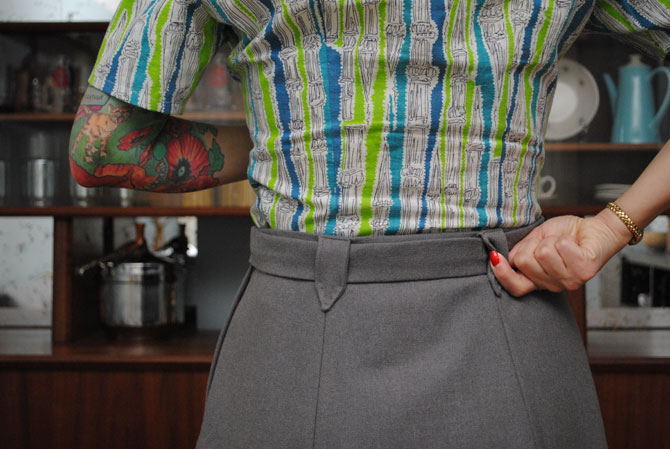 I think the first time I noticed similar belt carriers outside of Western-wear was about 6 months ago, on a 30s-style skirt from Nabby’s Vintage Life. I loved her skirt so much I pinned it for safe keeping. While I was trying to decide if similar belt carriers would look nice on my 40s gored skirt, I encountered this circa 1940 Hollywood pattern online, and that sealed the deal! 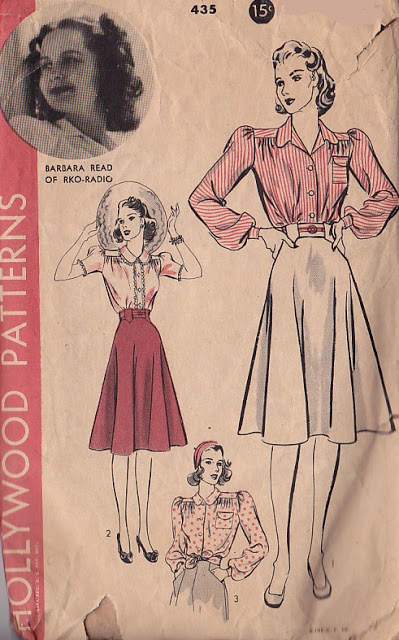 I created my own little pattern piece to sew them. I find for fiddly things, pressing is way easier with a cardboard template inside. You can see the difference it makes below! 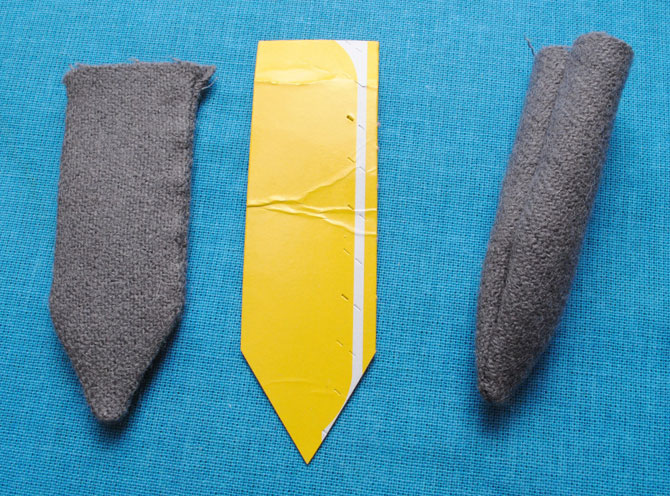 The top of the tabs are machine-stitched to the waistband, but my mom had a great idea for how to attach the angled part of the tab to the skirt: since I hand pick-stitched the lapped zipper, she suggested I mirror that in the tabs and pick-stitch them, too. I love it! 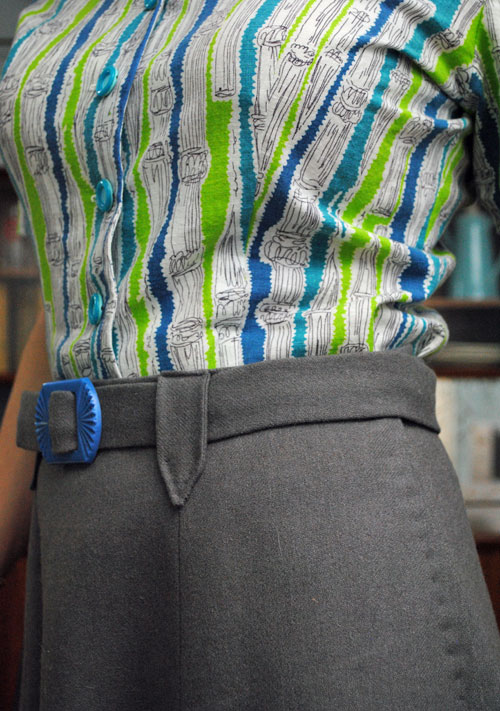 I couldn’t decide on a buckle for the self belt, so I used a blue plastic vintage one and just tacked it down in the back with contrasting thread. That way I can easily remove it and swap it to something different if I’d like down the road! In the meantime, it’s a swell match with this blouse. 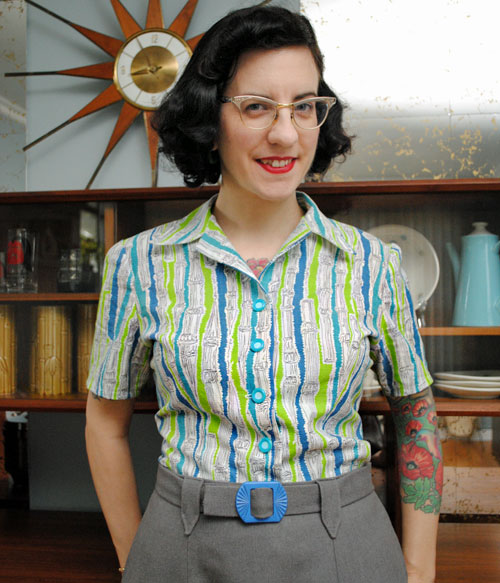 The blouse is my first button-down made from a vintage feedsack, sewn using McCall 4820 from 1942. Can you believe how vibrant the colors are?? 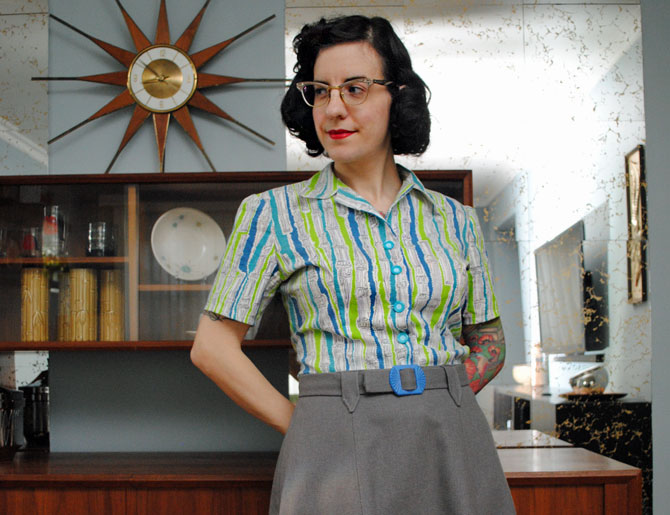 Now seriously, it’s been a goal of mine since I started to sew again in 2011 to be able to make myself feedsack blouses, but the yardage is really skimpy on them (we’re talking around 37″ x 46″). I knew it would be next to impossible unless I had a very slim-fitting pattern. But once I sewed up my inspired-by-Debi blouse with this pattern, I suspected it might be The One. And I was right! You don’t know how excited that made me! I have at least three other feedsacks lined up to turn into blouses now. Hallesewinglujah.

To figure out the cutting layout, I had to cut out doubles of all pattern pieces that required two and open up pieces on the fold, just so I could see it all placed out on the fabric together. In the end I can get every piece but an under-collar on one feedsack! So the under-collar is just muslin. 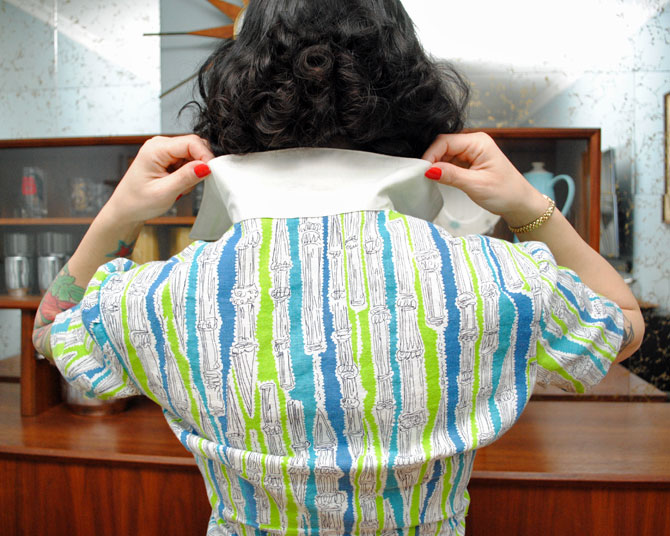 I modified the pattern pieces to have a straight hem instead of the westkit-style hem in the original pattern, but that’s it, so this pattern has now moved into tried-and-true territory. You’ll soon be seeing a third version recently completed in vintage fabric, and I could easily make a dozen more… and likely will! What can I say, I like winning patterns.

While I never explicitly meant for this blouse to go with the gray skirt, I think they make quite a smart pair! 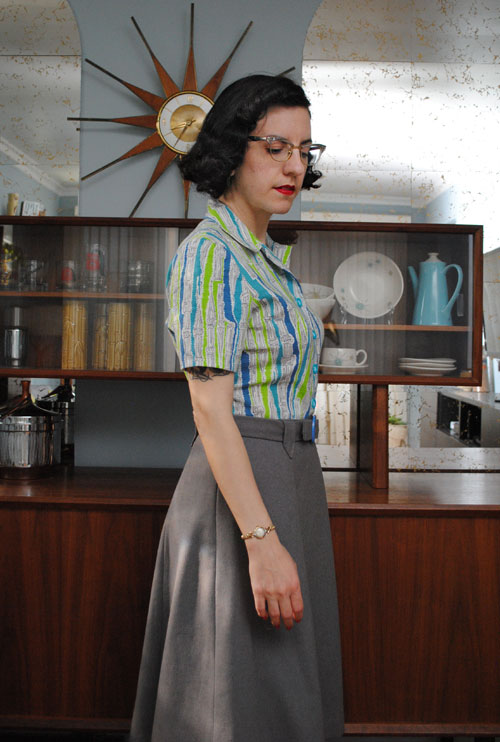 Along with the vintage feedsack fabric, I used vintage buttons from my stash that just happened to match perfectly. 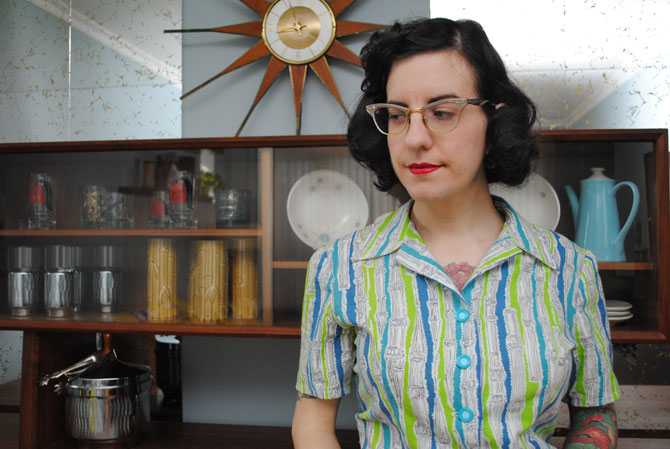 Overall I’m quite happy with the skirt and the blouse, and have worn both several times in the last couple of months. Both are great everyday pieces for me. I guess a sewist can’t ask for more than that! 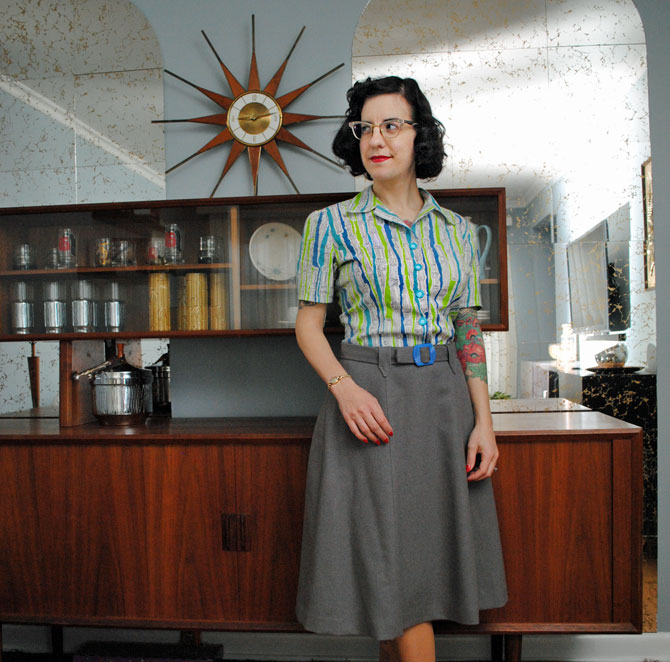