Well hello my friends! I know, it’s been awhile! I expected to share with you my progress on my project during the Ravellenic Games, Ravelry‘s knitting version of the Olympics that coincide with the Olympics. However, not only have I been caught up in watching the Olympics (London, you’re doing an awesome job!), I had to change my project. I started off with fair isle legwarmers for autumn, but then couldn’t watch the coverage while looking at my colorwork chart, so I pulled out a long-languishing work-in-progress sweater that I hadn’t touched since winter of 2011. I had the body knitted but no sleeves and no collar, so in the last week and a half I finished the sweater and crossed the finish line!

It’s a vintage pattern from Australian Women’s Weekly in 1942, called Knit it in Flag Colors. And though initially intended for a different flag, this project couldn’t be more appropriate for the London Olympics, don’t you think? It’s a free pattern, available here. 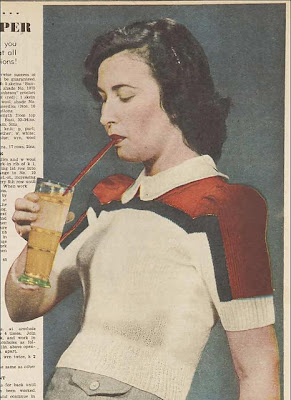 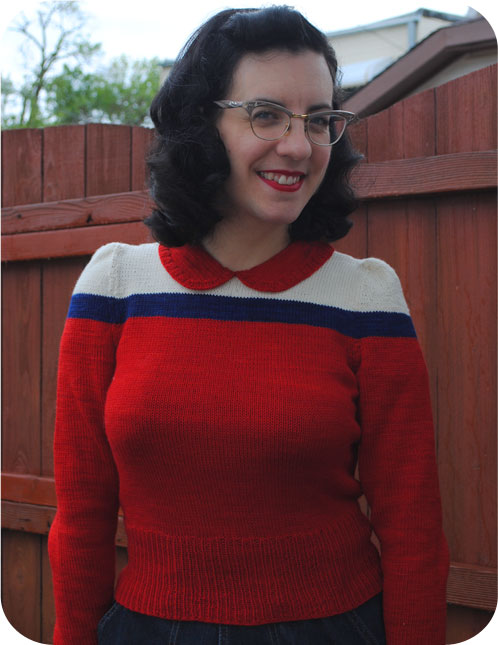 Obviously, I made a few changed, including flip-flopping the red and the white (my white is actually un-dyed yarn, but looks very bright next to the blue). One fortunate occurrence of not knitting on this for a year and a half is that when I picked it back up, I realized I was trying to decide what to do about the sleeves when I last worked on it. This time around I opted for long sleeves since I almost never wear my short-sleeved knits. I was talking to Liz from zilredloh.com last week when I met up with her (incidentally, I adore her and can’t believe it’s taken this long for us to meet!!), and we commiserated with one another about this. So, long sleeves it was. (Which I knit slightly too loose at the upper arm, oops.) 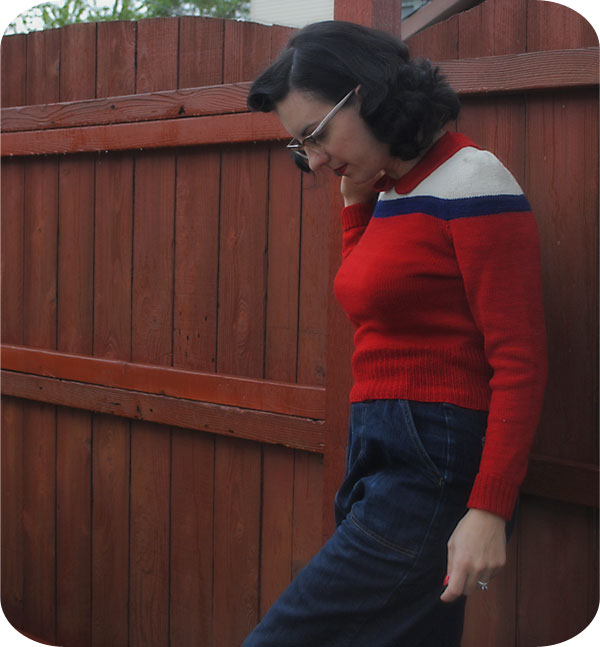 I opted to carry the stripe and color changes across the sleeve cap instead of knitting the intarsia stripes up the sleeves like the original pattern. To do this for a highly patterned project, the sleeve cap has the be the same number of rows from the armhole to the cast off as the body is from the armhole to the shoulder. That means the sleeve cap is going to have a bit more ease in it, which worked perfectly if you’re into 1940s styles, because you can just gather that bit of excess up into a beautiful gathered sleeve cap. Of course that wasn’t imperative for this project since the last color change was further down my arm, but I still used the same technique. 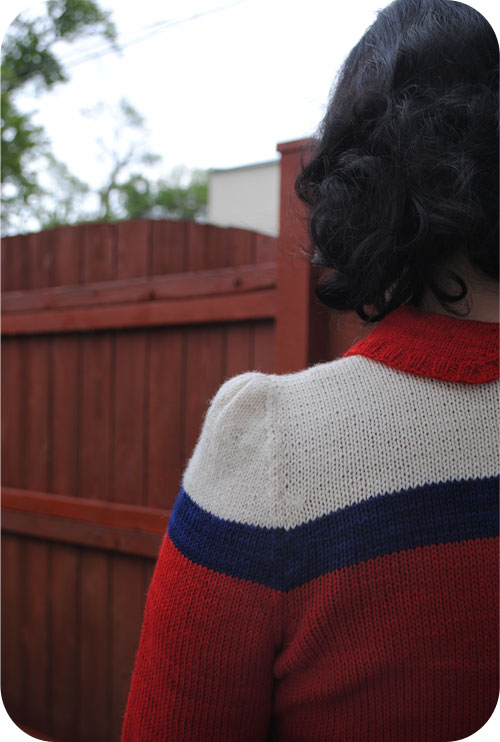 Another alteration I made was the collar. Instead of knitting two pieces flat and then seaming them to the neckline, I simply picked up stitches (along the inside, since the collar rolls out) and knit it out from there. Instead of folding under the edges and hemming it, I used ribbing as the border and bound off very loosely. When blocking, I had to roll the collar exactly the way I wanted it to lay so that the white from the inside didn’t show at the roll line. I also took a little stitch at the very center front to get the two halves to lay perfectly butt up against one another. 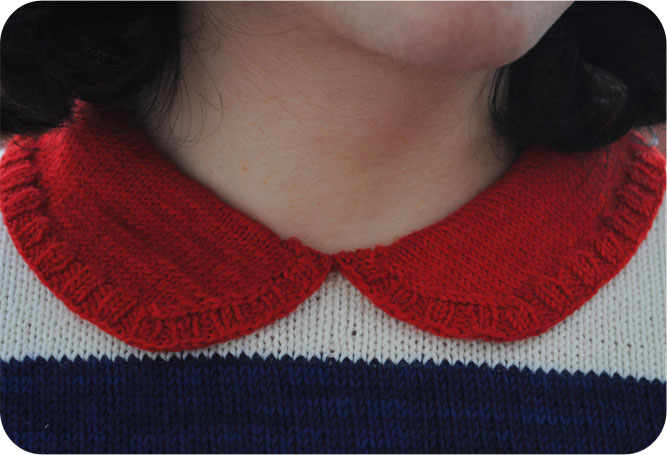 I fretted about the collar color and solicited advice from friends on my Ravelry teams, and in the end I’m really glad I went with red. Blue (which I started with) was too flag looking, and white would have faded into the background. 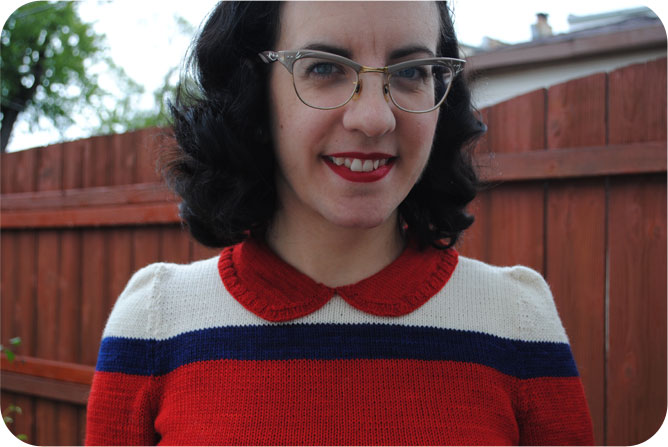 The back has a little surprise! (Other than my messy hair.) 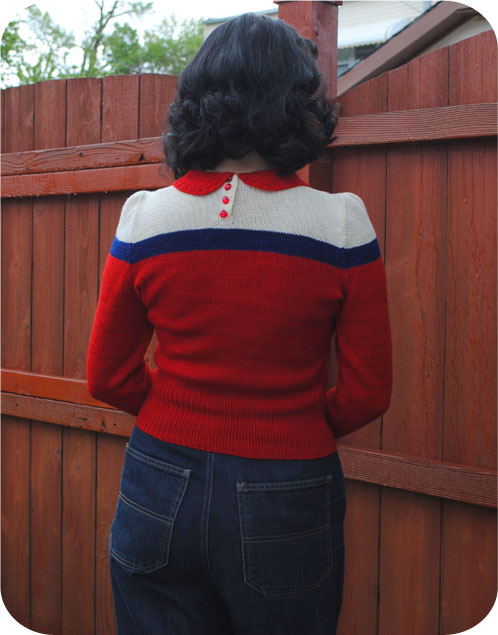 A four button placket! Now, remembering that I knit the body a year and a half ago, when I went to put it all together I realized my top two buttonholes were slightly closer together than the others, and I have no clue why I would have done that (unless it was on accident). But the top button is mostly hidden by the collar, so I don’t really care.

I used a hidden snap closure at the upper edge of the band so that it didn’t pull open slightly from the weight of the collar on the left side. Per the pattern, I used a double crochet stitch the edge the buttonband. These are cute little  moonglow buttons from my vintage button stash. I’m so glad I went with red buttons! I love the little ‘pop’.

Overall, I’m very satisfied with this pullover! It’s not the most exciting thing in the world, but I think it will work nicely for autumn. (Crazily, it is cool enough here today that when I took photos, I actually wasn’t dying from heat like I would have been any other day this summer!) 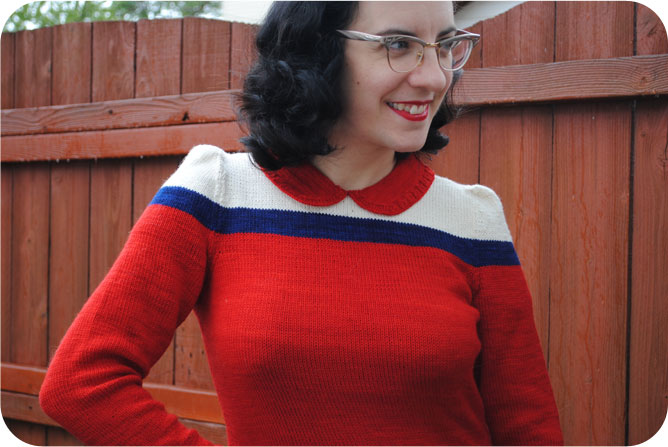 I hope to get back to more regular blogging soon. I’ve been having a bit of style ennui which has translated into blogging ennui. I know I’ve completely failed with keeping up on my Made and Making posts, and I’ve wanted to post again for the Vintage Knitting College series for ages and haven’t pulled that together yet either. Sorry! I’ve also been really on a knitting kick, which means no sewing has happened. It all just means I haven’t had much of anything to share.

Anyway, I do hope you’re doing well and enjoy my latest knit! 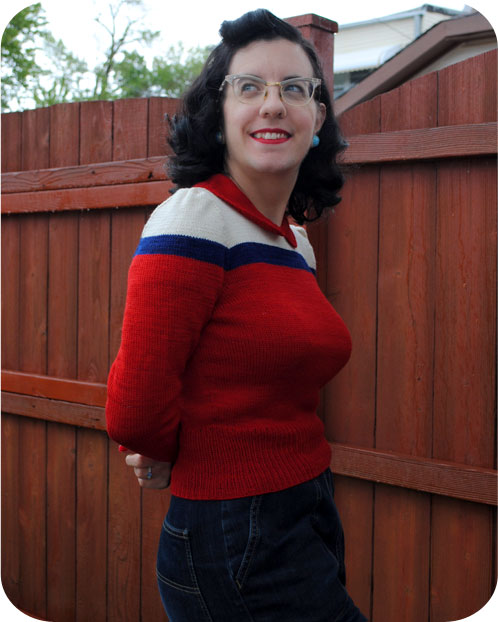